Grep has been used widely in Linux systems when working on some files, searching for some specific pattern, and many more. This time, we are using the grep command to display the lines before and after the matched keyword used in some specific file. For this purpose, we will be using the “-A”, “-B” and, “-C” flag throughout our tutorial guide. So, you have to perform each step for better understanding. Make sure you have Ubuntu 20.04 Linux system installed.

Firstly, you have to open your Linux command-line terminal to start working on grep. You are currently at the Home directory of your Ubuntu system right after the command-line terminal has been opened. So, try to list all the files and folders in the home directory of your Linux system using the below ls command, and you will get all. You can see, we have some text files and some folders listed in it.

From the above-shown text files, we will have a look at some of these and try to apply the grep command on them. Let’s open the text file “one.txt” first using the popular “cat” command as underneath:

We will first see some specific words matches in this text file using the grep command as below. We are searching for the word “we” in the text file “one.txt” using grep instruction. The output shows two lines from the text file having “we” in them.

Let’s use the same keyword “we” from this file to display the 3 lines after the line that have the word “we”. The flag “-A” presents “After”. The output again shows only 2 lines because it has not more lines in the file.

Let’s take another text file, “two.txt,” from the home directory and display its contents using the below “cat” command. 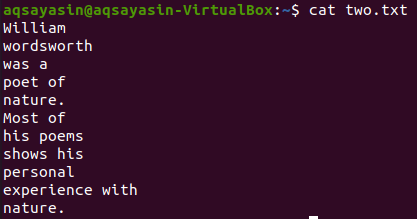 The grep command to shows the 5 lines after the word “Most” from the text file “two.txt” has been given below.

Let’s change the keyword to be searched. We will use “of” as a keyword to be matched this time. Display the 2 lines before the word “of” from the text file “two.txt” can be done by using the below grep command. The output shows two lines for the keyword “of” because it comes twice in the file. Thus the output contains more than 2 lines.

Now displaying the 2 lines of file “two.txt” after the line that contains the keyword “of” can be done using the below command. The output again displays more than 2 lines.

Another flag, “-C” has been used to display the lines before and after the matched word. Let’s display the contents of the file “one.txt” using the cat command.

Let’s see the contents of file “two.txt” using the below cat command. 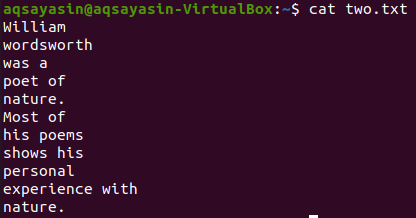 In this illustration, we are using “poems” as a keyword to match. So, execute the below command for this. The output shows two lines before and two lines after the matched word.

Let’s use one more keyword from the file “two.txt” to be matched. We are consuming “nature” as a keyword this time. So, try the below command while using “-C” as a flag having the keyword “nature” from the file “two.txt”. This time, the output has more than two lines in the output. As the file contains the word “nature” more than once, that’s the reason behind it. The keyword “nature,” which comes first, has two lines before and two lines after it. While the second matched the same keyword, “nature” has two lines before it, but there are no lines after it because it is at the last line of the file.

We are successful in displaying the lines before and after the specific word while using the grep instruction.