Apache Kafka is a powerful message broker service. It is very fast and reliable. Apache Kafka is open source and free to use. It is written in Java.In this article, I will show you how to setup partitions in Apache Kafka. Let’s get started.

To understand the basics of Apache Kafka Partitions, you need to know about Kafka Topic first.

A Topic is like a database in a SQL database such as MariaDB for Apache Kafka. A Topic has a name or identifier that you use to group messages in Apache Kafka.

A Partition is like a channel for each Topic. A Topic can have many Partitions or channels.

Multiple Partitions or channels are created to increase redundancy. It is also used to group messages in a specific Topic.

If you’ve followed my article to install Apache Kafka, then first start Apache Kafka server with the following command:

You can create an Apache Kafka Topic testing with the following command:

The Topic testing should be created. This Topic has 1 partition.

If you want to create, let’s say N partitions, then set –partitions to N.

Topic users should be created with 3 Partitions.

Adding Partitioned Messages to the Topic:

The key is used to determine which Partition a message of a Topic belongs to. It should be unique on a Topic. If you have 3 Partitions, then you should use 3 different keys. So that the messages can be divided into 3 Partitions.

Let’s say our users Topic has 3 users with key 1, 2, and 3, each of them belongs to one of the 3 Partitions of the users Topic.

Run the following command to add the first user with key 1 using the Kafka Producer API:

Now you can list the message from the users Topic using the Kafka Consumer API with the following command:

As you can see, the key and value pair I just added to the users Topic is listed.

Add another user with key 2 with the following command:

As you can see from the marked section of the screenshot below, the new user is listed on the Consumer program instantly.

Let’s add our last user with key 3 with the following command:

As you can see, the new user is also listed in the Consumer program. 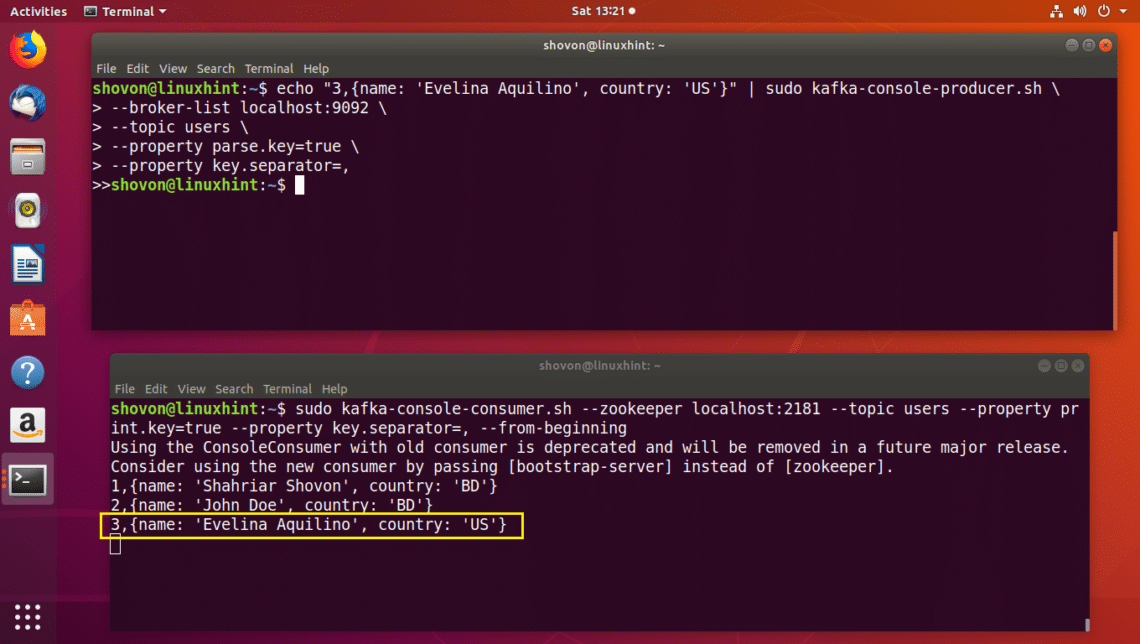 You can also add many users to the same Partition. Just make sure the key is the same.

Let’s add another user to the Partition with key 1:

As you can see, the new user is added to the correct Partition of the users Topic. 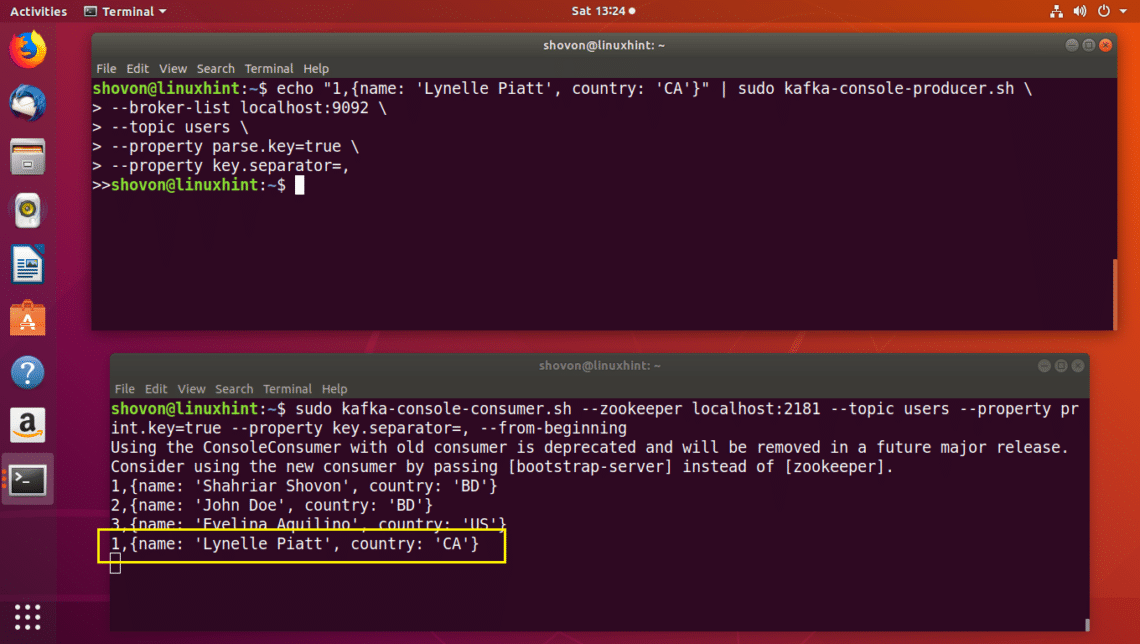 I can keep adding random users to the users Topic and they will be send through the correct partition as you can see from the screenshot below.

So that’s how Partitions in Apache Kafka works. Every Partition is like a Queue, the first message you send through that partition is displayed first, and then the second message and so on in the order they are sent.

If you’re a Java developer, you can use Java programming language and Apache Kafka Java APIs to do interesting things with Apache Kafka Partitions. For example, you can assign different Partition for different chat rooms for your instant messaging app as messages must be displayed on the order they are sent.

So that’s all for today. Thank you for reading this article.