Syntax of the Sem_Open 3 C Function

Description of the Sem_Open() Function

If a semaphore wouldn’t present yet, it is established by using this flag. O_CREAT has no impact if the semaphore is present and specified, except for what is mentioned in the O_EXCL. A labeled semaphore is formed instead if we use the sem_open() function. The 3rd and 4th parameters for the O_CREAT attribute are modes of format mode t, its content, and of data type unsigned integer.

Apart from those configured in the system’s file format initialization mask, the authorization bytes of the semaphore are all assigned to the value of the argument mode. The impact is ambiguous whenever the elements in a mode instead of the file access flags are provided. Other methodologies may link to the semaphore by invoking the sem_open() function having a similar value of the title. Afterward, the semaphore termed name is formed by the sem_open() function including the O_CREAT flag.

The outcome is undefinable when O_EXCL and O_CREAT are specified. The impact is undefined if the oflag variable contains flags apart from O_CREAT and O_EXCL. A string specifying a semaphore item is the source of the name parameter. If the value resides in the system files and is accessible to the methods that use the pathnames as parameters are not provided, the name parameter meets the requirements for a pathname’s formation. The initial element in the name is a slash (/), and no other elements in the name may contain slashes.

The very same semaphore location is provided for every consecutive access to the sem_open() function that a method makes having the similar name value, provided that no arguments to sem_unlink() function were made for such semaphore. Links to the semaphore duplicates generate inconsistent results. Unidentified semaphores are employed with the sem_init() method.

The function returns the location of the semaphore after a successful execution. If not, this should be assigned errno to identify the error and generate the results of the SEM FAILED. The header contains a description for the term SEM FAILED. If the sem_open() fails, it always provide the value in the form of the SEM FAILED.

Let’s see how the sem_open() function works in Ubuntu. At the start of the program, different libraries are imported. These modules are responsible to operate the different functions. Then, we define the size of the buffer and set it to 10. We initialize a variable buffer and declare the different other variables. In the next step, we initialize the counter variable along with these two specified constructors. We apply the for loop and define the condition. We also utilize the while loop. 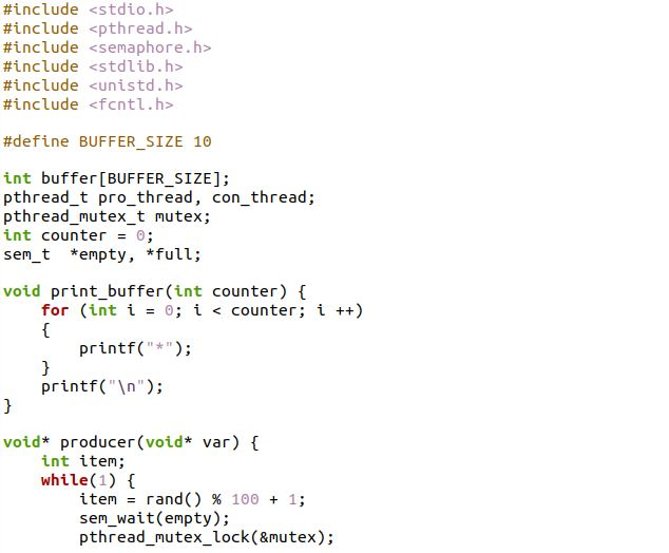 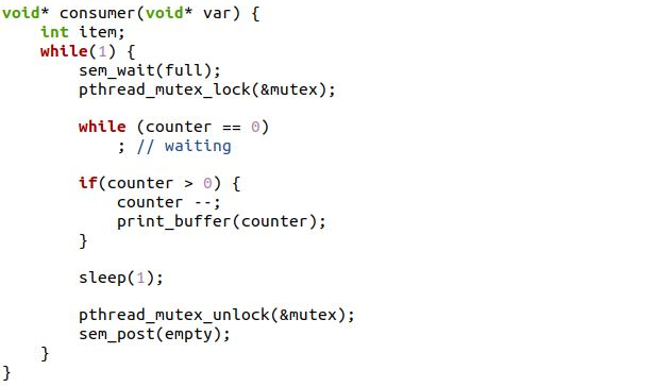 In this phase of the code, we declare the various variables. Now, we declare a constructor. We call the sem_open() method. It contains four different parameters. To terminate the program, we apply the pthread_exit() function.

We get this following sort of output after running the overhead code: