This guide’s examples will work with Ubuntu 20.04. To run these examples on Ubuntu 20.04, the GCC compiler must be installed. A small bit of the C code is generated when GCC is installed to demonstrate how to use the “sem_getvalue()” function in the C programming. A few header files are used at the commencement of the code. We have the “stdio. h” header file as follows which is the default input/output header file. We must add this header file when we are writing the C code.

After this, we put the “semaphore. h” header file. We include this header file so that we can use the “sem_getvalue()” function as it is defined in this header file. Then, we put the “main()” function here. We use the “int” data type with this “main()” function. We also have the “sem_t” with the name “my_sem”. Here, “my_sem” is declared and the “num” of the “int” data type is also declared. Below this, we utilize the “sem_init()” function. This “sem_init” contains three parameters. The first parameter is the “&my_sem” which initializes the semaphore. The second parameter indicates how this semaphore is used or shared.

Here, we put “0” as the second parameter which means that it is the only thread running in the existing process that is going to use this semaphore. The third parameter describes the preliminary value of the semaphore. Here, we put the initial value of this semaphore as “10”. After this, we have the “sem_getvalue()” function which gets the preliminary value of the semaphore. We pass the two parameters as “&my_sem” and “&num”. The semaphore’s number is obtained in this way. Now, we print this number on the terminal screen by typing the “printf” statement. The data written here is rendered on the screen.

We have two commands to obtain the output of this code. We must put the “-lpthread” and “-lrt” with the first instruction and press enter. After a successful compilation, we run the second command and render the output. You can see in this output that it displays the initial value of the semaphore.

We have two header files here, “stdio. h” and “semaphore. h”, which we have already discussed in our previous code. We have the “int main()”. Below this, there is the “sem t” named “my_sem” and “new_sem”. In this case, “my_sem” and “new_sem” are declared and  the “num” and “value” are also declared as the “int” data type. We also have the “sem_init()” function and pass the three parameters.

We update the previous code a little bit here. The code is identical to the one we developed earlier. We place the two header files – “stdio. h”, and “semaphore. h” – which are essential for this code and utilize the “int main()” function. Below this main function, we declare the semaphore and the value which is the “int” data type. Then, we initialize the semaphore using the “sem_init” and pass the parameters of this function. Then, we get the initial value of this semaphore using the “sem_getvalue()” function. Then print it in the same manner as we described previously. 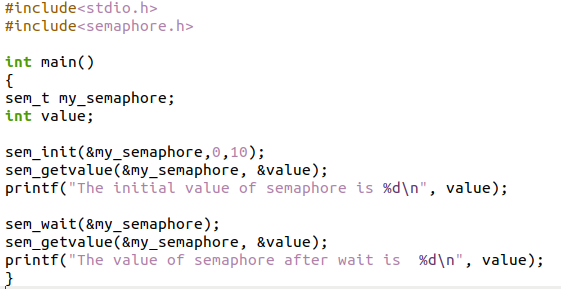