“Seaborn is a magnificent Python visualization technique for displaying analytical representations. It includes appealing standard styles and vibrant colors that create statistical graphs that are very captivating. It is implemented at the start of the matplotlib framework and is intimately linked with panda’s modules. Scatterplots are being utilized with a variety of semantic categories to assist with visual analysis. This may create two-dimensional visuals which could be extended by translating up to different parameters and utilizing the color, size, and layout attributes’ semantics.

All of the features influence optical interpretation that can be utilized to differentiate between subsets. When it comes to producing visuals more effectively, employing redundant interpretations will be useful. In this article, we have gone through several approaches used for drawing the scatterplots by using the seaborn library.”

We used the scatterplot() method to create the scatterplot. Here the tips set of data is being used in the scatterplot. This would be a collection of tip data depending on the overall bill. For a plot, we may utilize any data frame. The code is written in Windows CMD and displayed as follows. 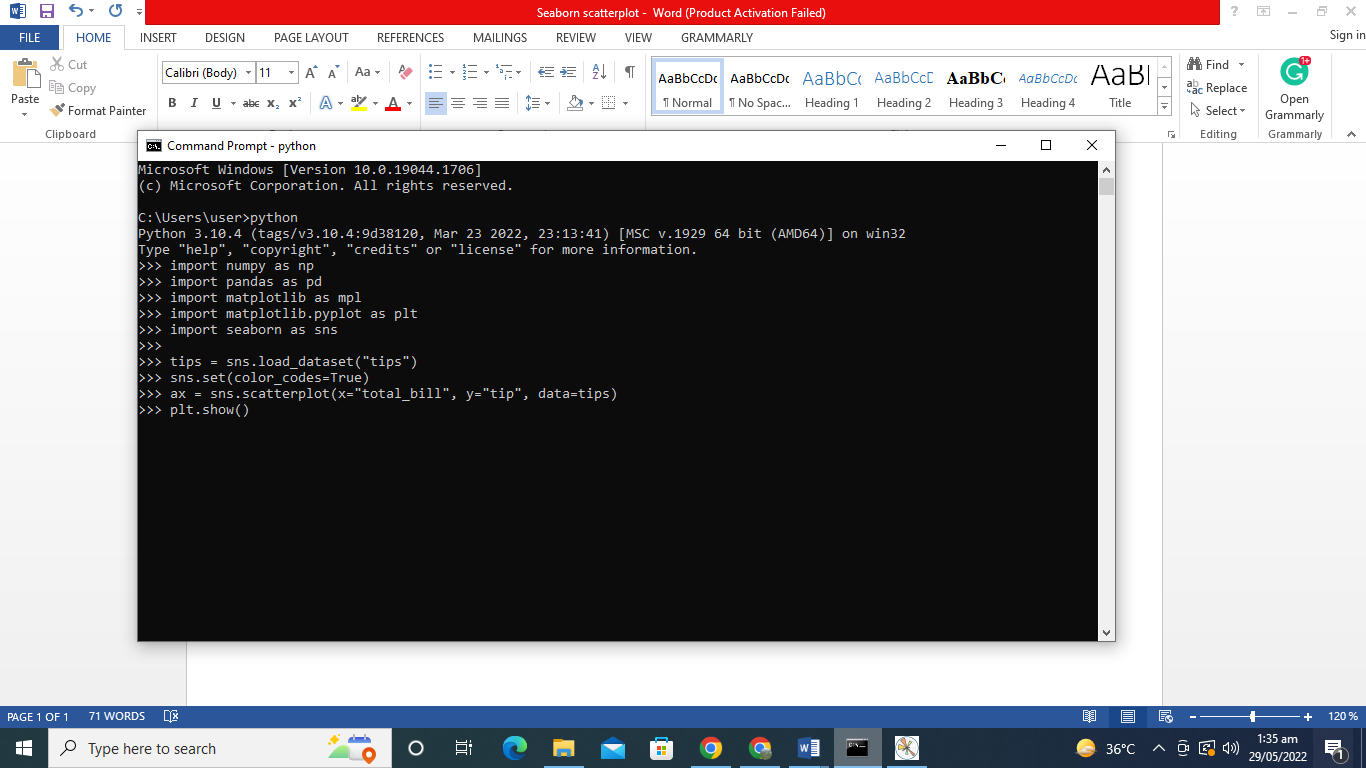 Then we apply the set() function of the seaborn library to specify the color codes. To draw the scatterplot, we have employed the scatterplot() method. This function contains three different parameters such as the values of x, y-axes, and the value of data. We have used the show() method to represent the plot. 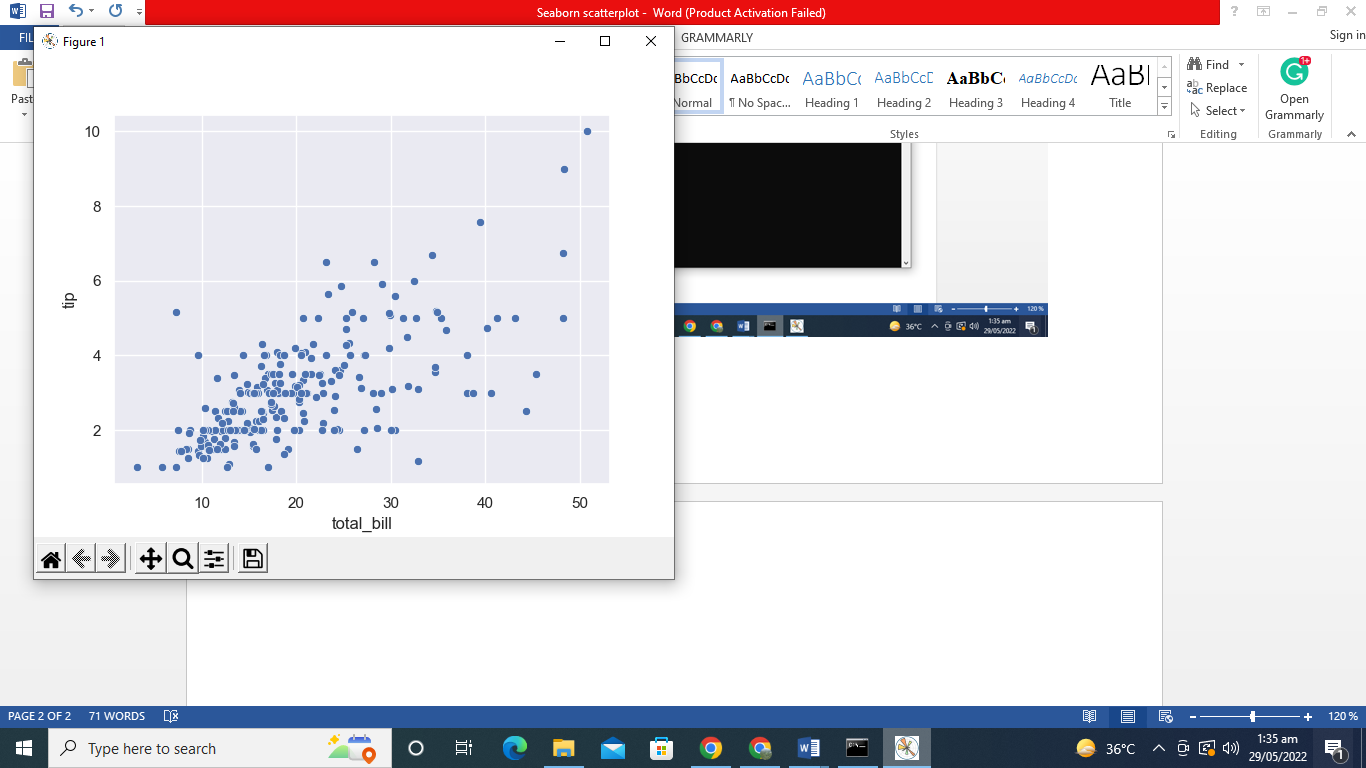 We will use a parameter called “hue” in this scatterplot; it enables users to display components from a graph variable. This attribute will be used to visualize the categories within a nominal variable. The link between length and width of sepal of several varieties has been displayed. The Hue attribute enables us to depict categorized values in different tones. The code is written in Windows CMD and displayed as follows. 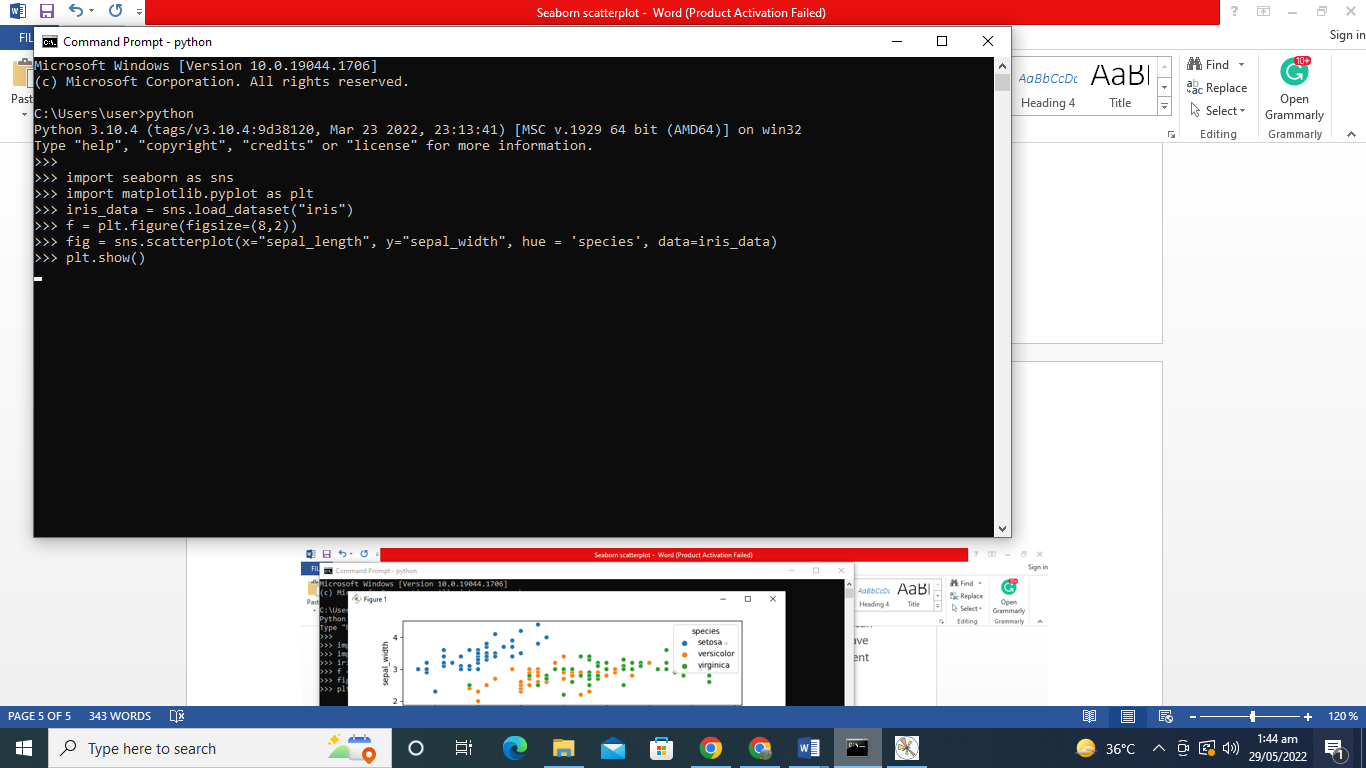 After including the libraries seaborn and matplotlib.pyplot, we have declared the variable “iris_data.” And we have assigned the loaded data of iris to this variable. In the next line, we have specified the size of the graph by using the figure() function. The size is stored in the variable “f.”

Now we have applied the scatterplot() method. This function is used to draw the plot. We have given the labels of both axes, the value of hue, and the data frame as its parameters. In the end, the show() function is utilized to illustrate the plot. 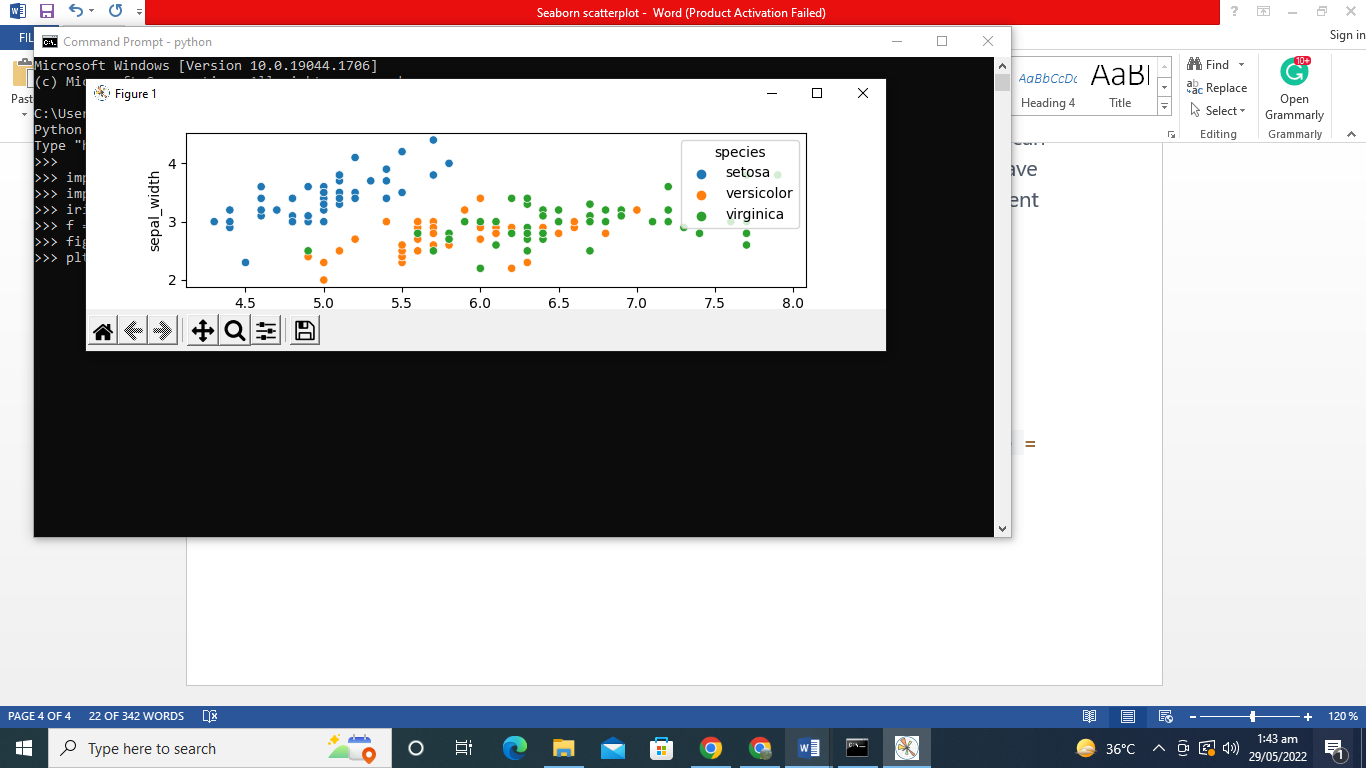 By using the palette argument, we displayed the scatterplot with a customized color scheme. This feature enables the display of the categorized variable through an expanding tint, with the categories shown in order of increasing the numerical aggregate parameter from paler to darker shades.

Since the species has a longer floral length than other species, it is portrayed in the gloomiest shade, whereas those with shorter petal size species are depicted in lighter shades. The code is written in Windows CMD and displayed as follows. 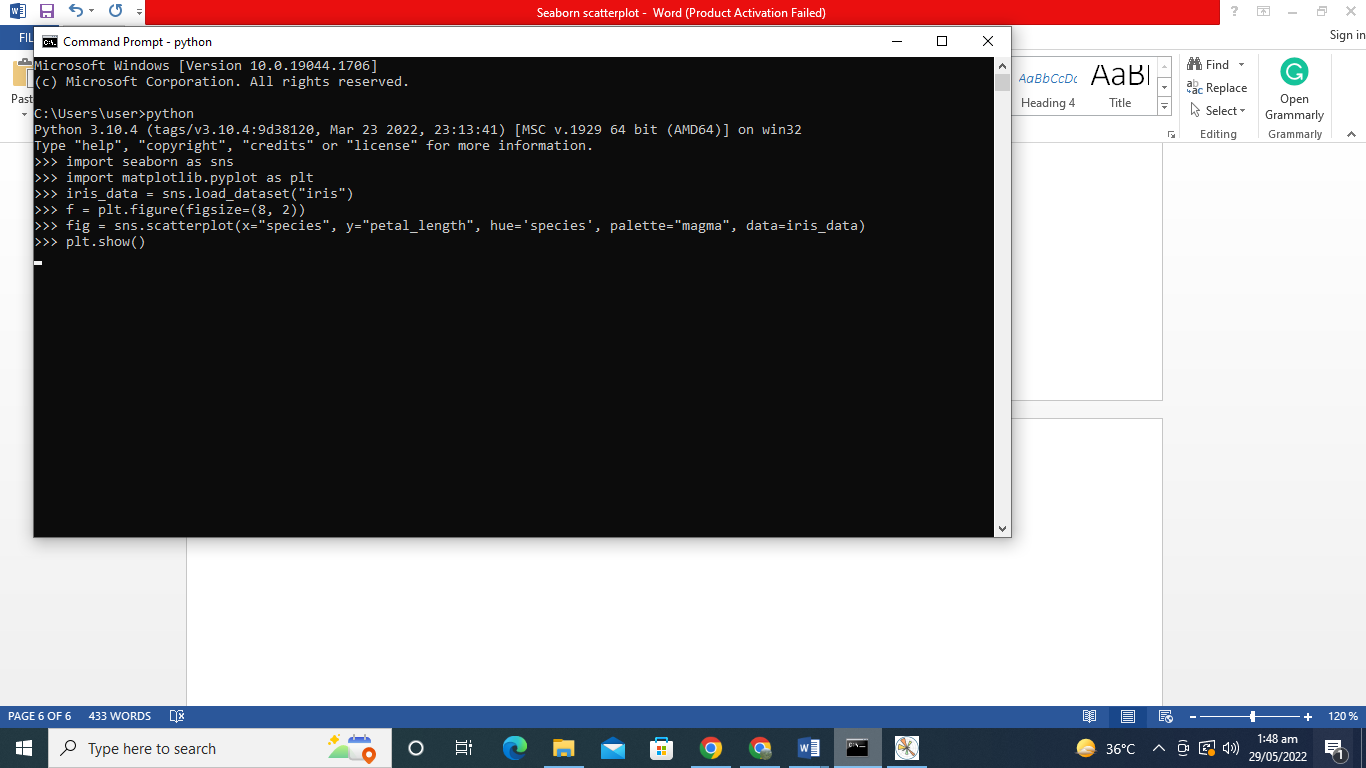 At the start of the program, we just integrated the header files required for plotting. The load dataset() function would be used to load the iris data frame. This method reflects the main attributes of three different iris blossoms, including length, the width of the sepal, length, and width of the petal. The size of the defined figure is defined by the function figure(). 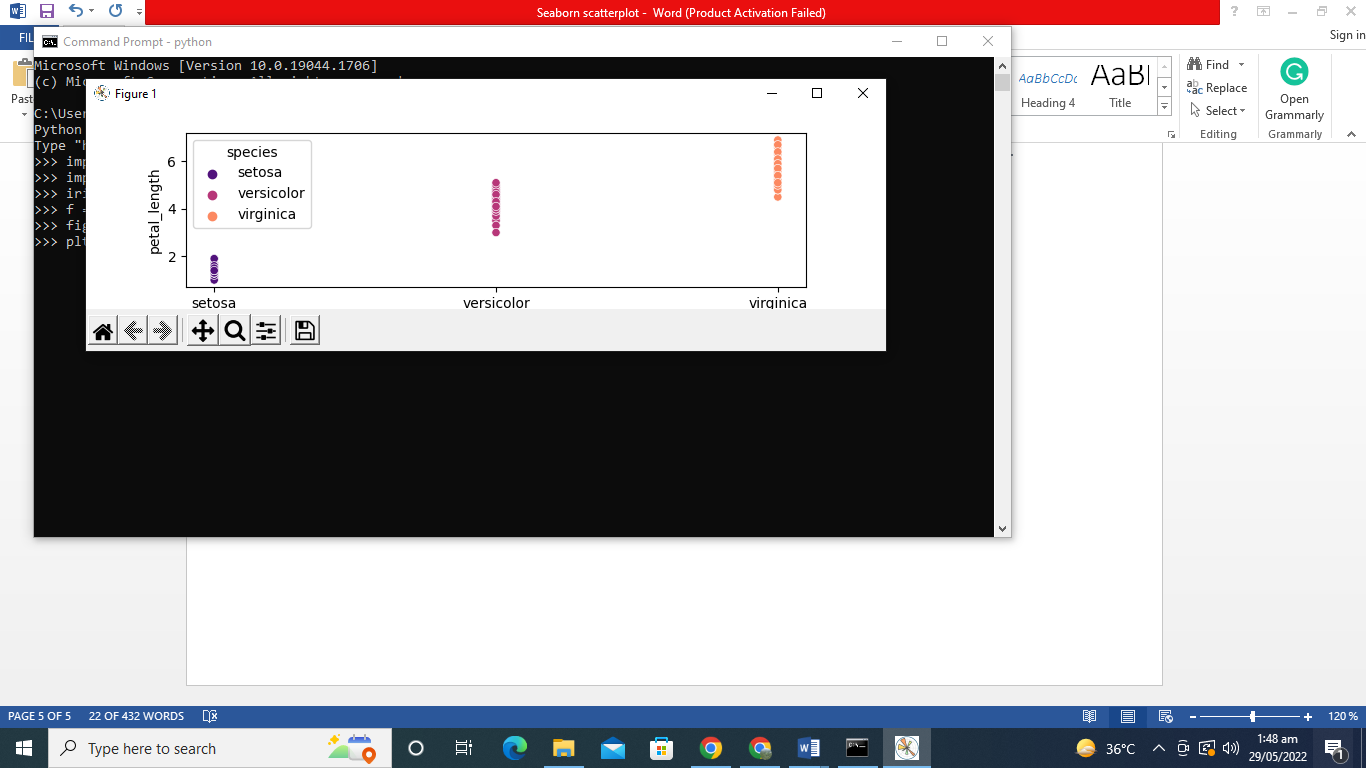 We will also employ the parameter “marker” to customize the scatter point pattern to any selected designs. In the market parameter, we may specify the style of the scatter points that require. In this instance, we have indicated the points with a “+” symbol. The additional parameter named “alpha” is utilized to display the relative luminance of the various points. The code is written in Windows CMD and displayed as follows. 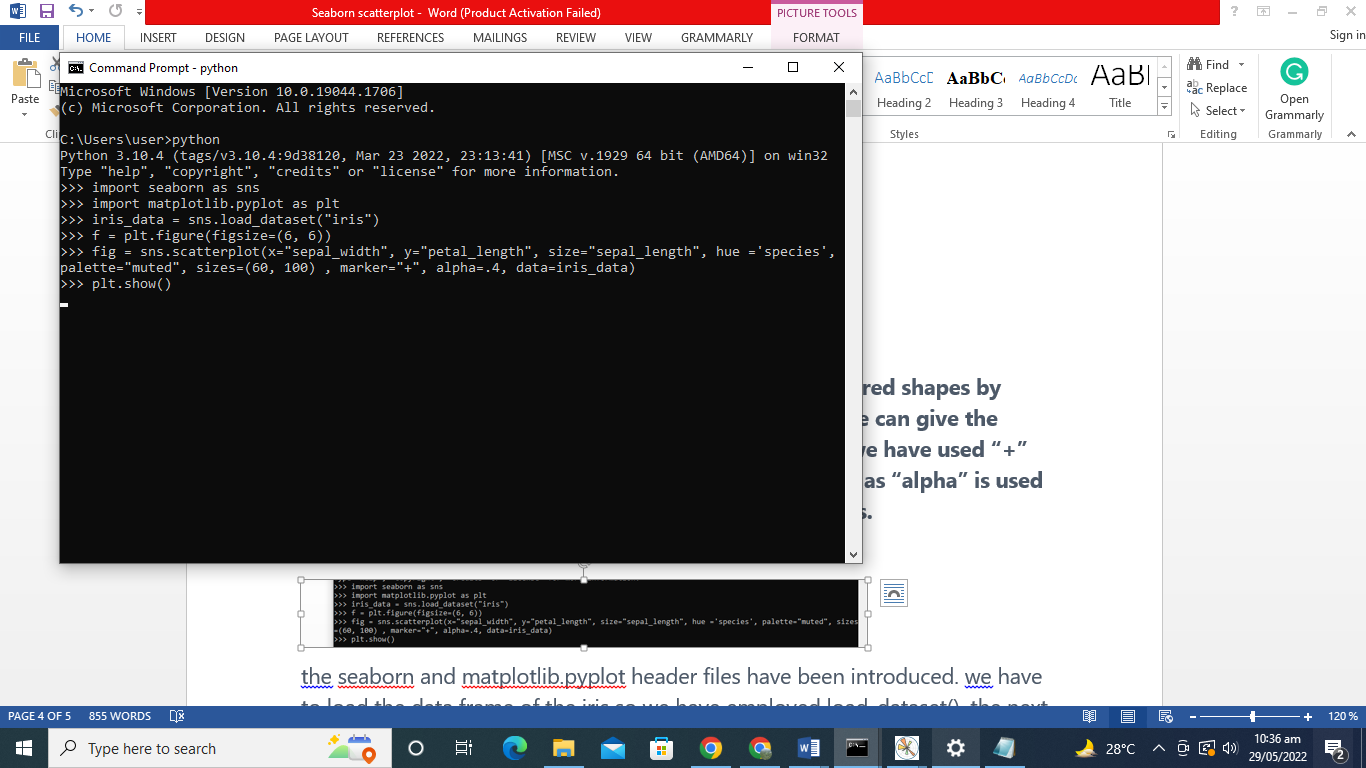 The seaborn and matplotlib.pyplot header files have been introduced. We have to load the data frame of the iris, so we have employed load_dataset(). The next line contains the function in which we adjust the size of the plot. To create the plot, we employed the scatterplot() function. For the different kinds of iris blooms, we displayed the width of the sepal on the x-axis of the plot and the length of the petal on the y-axis.

To identify the scatter points according to the length of various species, we used a specific parameter termed sizes. We will observe that the scatter points change in size from wider to lesser depending on the length of the sepal. We may define exactly the difference between parameters employing a specific version by providing the “sizes” parameter. We provided the function the parameter “marker” and assigned it the value “+.” To depict the plot, the show() function is used. 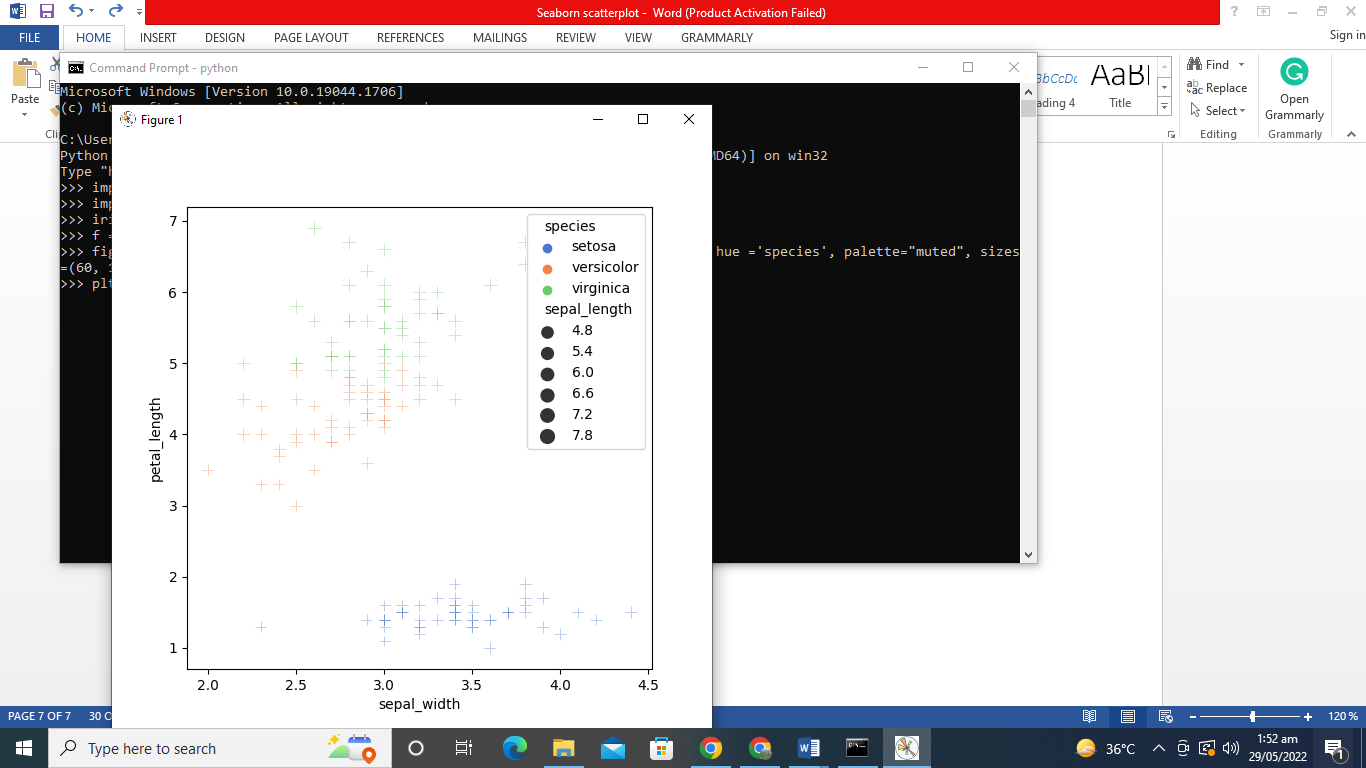 We have discussed the seaborn scatterplot by using different instances in this article. We have drawn several scatterplots with the support of seaborn and matplotlib libraries. This article also demonstrated numerous elements of the scatterplot() function. The integrated library Seaborn is being employed in the Python language. It offers a unique visual analytical interface. Components providing datasets, processes, and data processing make up the system. The Seaborn and Matplotlib modules are frequently applied in the field of data analytics. When it comes to designing visuals more attainable, incorporating multiple notions can be preferable.