“Seaborn aids in data exploration and comprehension. Its charting functions work with data frames and arrays containing entire datasets, performing the required Statistical aggregation and semantic mapping internally to build useful graphs. The statistical associations can be seen with the help of Seaborn. Statistical analysis is used to figure out how parameters in a dataset relate to each other and how that connection is influenced by other variables. This statistical analysis aids in the visualization of trends as well as the identification of various features in the dataset.

By default, Pandas DataFrame is used to load the dataset. This DataFrame is used by any Pandas DataFrame function. DataFrames are rectangular grids that hold data and allow for easy viewing of the data. Every column of the grid pattern is a vector that keeps data for a single variable, and each row of the grid has values of an instance. This means that the values in a DataFrame’s rows do not have to be of the same data type; they can be arithmetic, text, logical, or anything else. DataFrames are two-dimensional annotated data containers with diverse sorts of columns that come packaged with the Pandas module for Python.

The library in Seaborn includes a few key datasets. The datasets upload automatically after Seaborn is installed. The needed dataset can be loaded with the assistance of the subsequent function.

This function gives you rapid access to a limited number of sample datasets that you can use to document seaborn or create repeatable examples for bug reporting. Normal usage does not necessitate it.”

In our first example, we are using the box plot to picture the records. We have seaborn and matplotlib modules for plotting the line plot. Then, a variable is declared as data, and inside that variable, the seaborn load_dataset is called. The load_dataset takes the tips data frame, which is by default present in python. Now, we can call any of the columns from the titanic dataset for the rendering of the plot. The box plot takes x as an argument to which we have set the total_bill column from the sample dataset titanic.

The titanic data frame boxplot is visualized in the following figure. 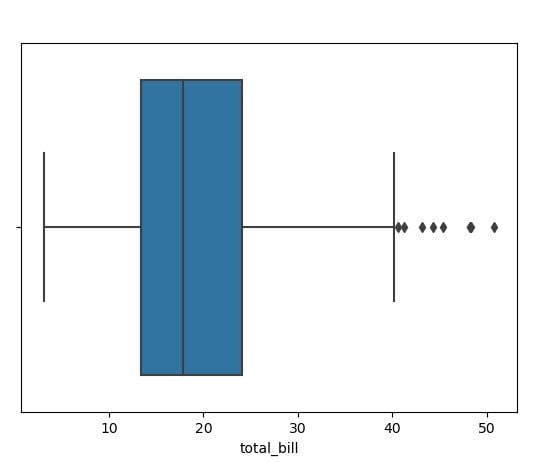 We can plot the data frame with any of the seaborn plots. In this example, we have a violin plot for making the seaborn data frame plot. A box plot and a violin plot are comparable. It compares the distributions of numerous quantitative data points among one or more category factors.

From the sample dataset tips, we are taking two columns, total_bill and time, for the x and y axes of the plot. To use these columns for the plot, we have a seaborn violin plot here which takes the x as total_bill for the axis and y as time for the y axis. These specified columns are compared with each other in the plot.

The data frame is visualized in the following figure. 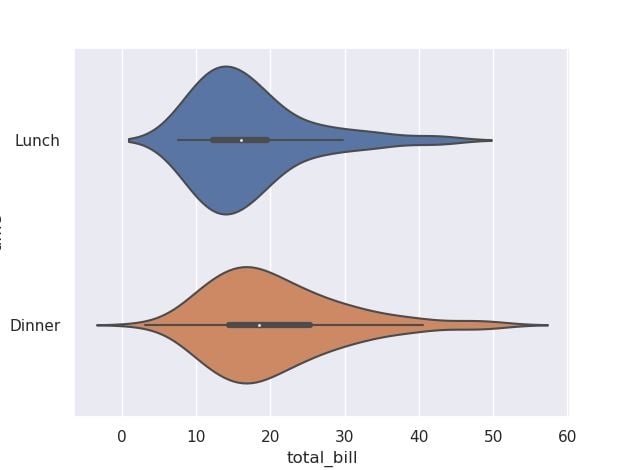 Here, we have shown the dataframe plot with the point plot. A point plot can indicate estimation with confidence intervals by using scatter plot graphics. The point determines an estimated statistical significance for a data point based on the point location of the scatter plot and includes error bars to indicate the level of uncertainty.

In the following script, we have set the style dark grid for the background of the plot. Then, we have a load_dataset function, this time we have an iris dataset for generating the plot. We have passed the columns sepal_length and sepal_width to the x and y parameter for the point plot.

The point plot of the dataset iris is shown as follows: 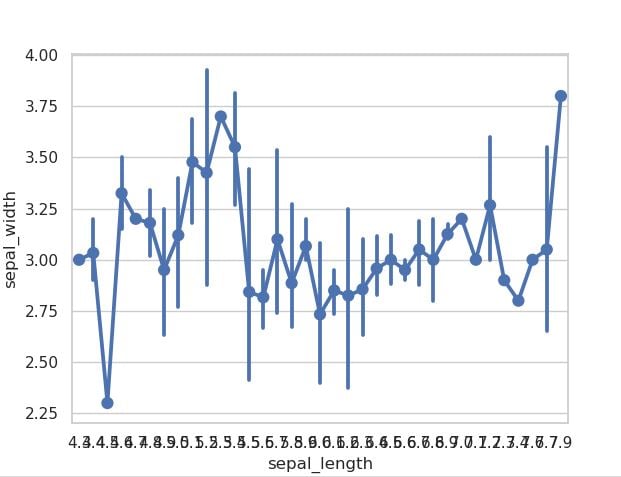 The two-dimensional pandas DataFrame is appropriate for statistical structure with labeled axes that can be varied and is size-mutable (rows and columns). To create the panda’s data frame, the lengths of all arrays must be equal. If an index is defined, it should have the same length as the arrays. If no index is set in range(n), then by default, the n is used, which is the length of the array.

In the given code snippet, we have imported the panda’s module, and then we have called the pandas DataFrame constructor, where the two arrays are specified as List1 and List2. We have a collection of random numbers in an array of equal length. For making the graph of the above data, we have a KDE plot. It shows the probability density of a continuous variable at various levels. We can also create a separate graph for several samples, making data visualization easier. The data property is called with the fields it has inside the DataFrame.

The KDE plot shows the comparison of the pandas DataFrame inside the figure. 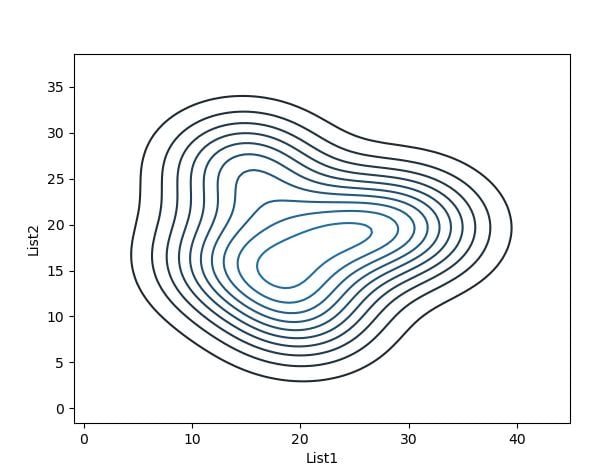 Now, you have a brief seaborn plot data frame article here. We can create the data frame by ourselves with the panda’s data frame. The DataFrames in Pandas are strong reader data sets that you should use to obtain a deeper understanding of your information. We can also utilize the built-in seaborn sample data frames by using the load_dataset function. This data frame can be plotted with every seaborn plot, as we have shown the numerous examples which plot the data frames.