Histograms are visual representations of a collection of continuous data distribution. A histogram divides the data into intervals or bins (typically on the x-axis), with the number of data points falling into each bin equal to the height of the bar beyond that bin. These bins are not all the same size, but they’re near each other (with no gaps). Also, these bins’ widths aren’t necessarily equal, but they’re near together (with no gaps).

We will go over the Seaborn Histogram Plot explanation in this article, which will help you visualize the data distribution in data science and machine learning applications. This article will show you how to use the seaborn.histplot() method to create a variety of various sorts of histogram displays. We’ll also explain what each of the Seaborn Histogram function’s arguments means.

Another tool for examining data distributions is a density plot and the kernel density plot is another name for this. It’s a smoothed histogram. A density plot’s peaks show where the values are accumulated throughout time. Smoothing methods are available in a variety of sizes and shapes. One of the methods for smoothing a histogram is Kernel Density Estimation (KDE).

Syntax of the Seaborn Histplot

Seaborn’s histplot method has a very straightforward syntax. The seaborn.histplot() method is a specialized function for producing histograms in Seaborn.

We normally use the data argument inside the parenthesis to identify the data frame we want to work on, and the x argument to specify the specific the variable we want to plot. There are a few more arguments we could use to alter the behavior of the histplot() function.

KDE: You may insert a “kernel density estimate” line on top of your histogram using the KDE option. A KDE line is a continuous line that depicts the data density. KDE lines are a visual representation of how data are distributed that can be used instead of histograms. However, KDE lines are sometimes used in conjunction with histograms. As an argument, this option takes a Boolean expression (i.e., True or False).

hue: This parameter aids in the color mapping of variables for plots.

weights: Weights assist in determining the influence of every data set on the count of each bin.

bins: The bin parameter which specifies the number of bins to use.

binwidth: The bin’s width can be adjusted here.

binrange: The lowest and greatest values for edges can be set using this option.

palette: For hue semantic mapping, we can choose our shades.

color: If no hue mapping is available, this argument allows us to pick a single color from matplotlib.

Here, we created a simple histogram by using the default parameters. We imported the libraries which help us to generate the plot. After that, we set the styling for seaborn by using the style parameter as darkgrid in the set function. For the histplot, we loaded a data set “mpg”. The seaborn histplot function is then invoked where the data and x parameters are passed and assigned a value. The x parameter takes the field name acceleration from the dataset “mpg”.

The simple histogram plot representation is as follows: 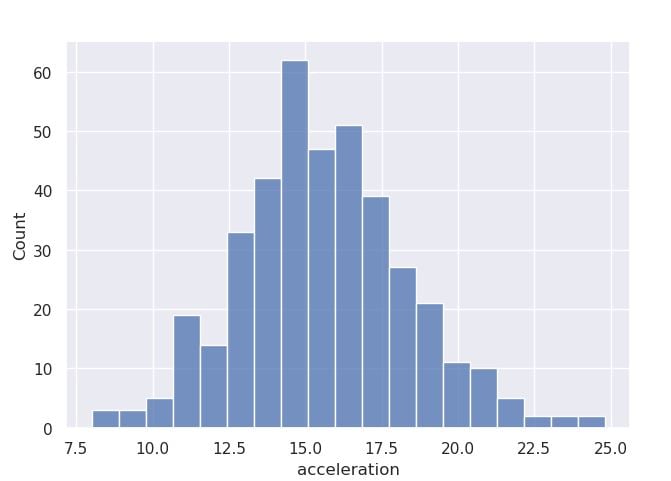 The following is the histogram visualization with the kde curve line: 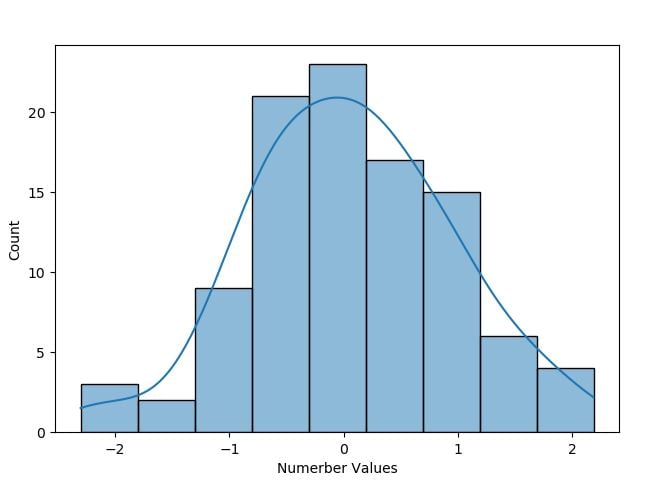 The sample dataset “Iris” from the Seaborn package is used in this example. We added the matplotlib, seaborn, panda, and NumPy libraries essential for creating the histogram plot. Then, we created a variable df_iris where the sample data set iris is loaded. The seaborn histplot takes the dataset iris inside it and sets the parameter x as the sepal_length from the iris data set, kde value to true, and the semantic variable species is mapped using the hue parameter. 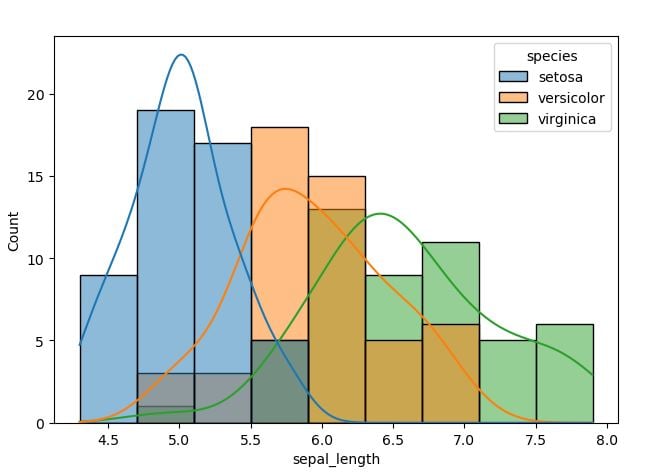 In this example, the histogram is normalized so that the height of each bar represents a probability rather than a count of data points. Here, we loaded a sample data set “dots” which has some different characteristics. Among these characteristics, we set the x parameter as firing_rate in the histplot function from the data set dots. We also specified the stat parameter as a probability and the discrete value to true which combines the bin breaks with bars that are centered on their respective value to depict the distinct values in a dataset. At last, the color parameter is set to the green color.

The representation of the histogram plot with the probability is in the following snapshot: 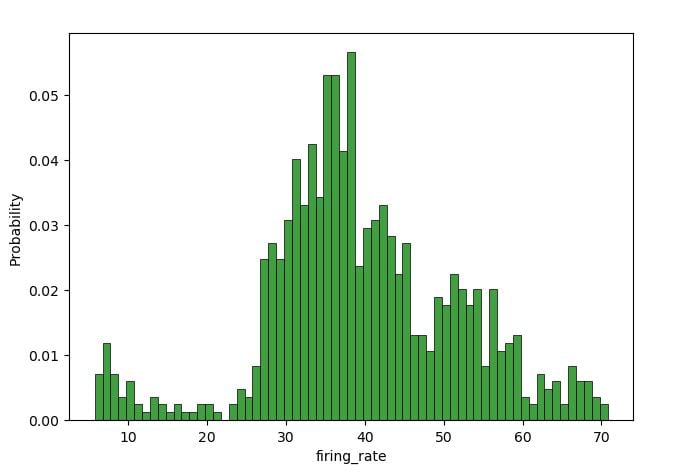 We can construct the second form of a histogram. The bivariate histogram depicts two variables using the x and y axes. This example illustrates a bin-valued bivariate histogram with a color bar to indicate the values. The colormap is used to display the color bar. We inserted the data frame of penguins as the data set. The variables x and y, as well as the bins, discrete, and log scale parameters, are then specified in the histplot function. To link the color bar to the plot, we additionally gave the cbar option. The discrete parameter is used to handle histogram gaps, and the log scale is used to set a log scale on the data axis.

The visualization of the bivariate histogram plot is shown in the following figure: 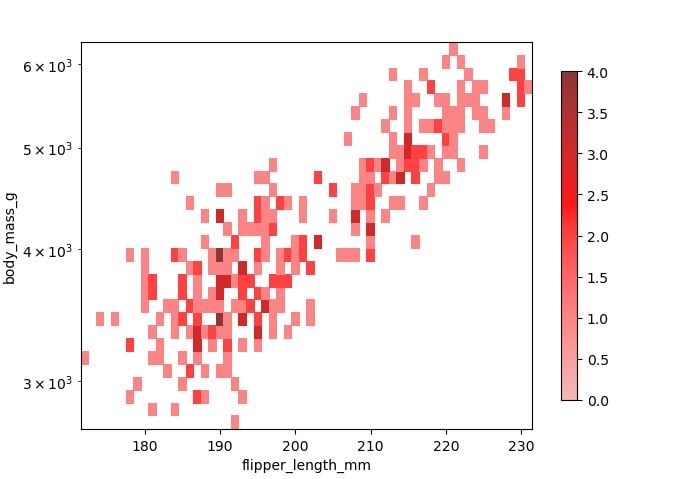 We explained the histplot in seaborn. We used the histplot() function in this post to go over the Seaborn Histogram Plot guide. We examined a variety of instances of histogram creation for multivariate statistical circumstances, as well as the binning strategies.