“In the seaborn module, there are a variety of plots to choose from. However, when interacting with categorical attributes, we may require a consistent strategy for plotting the data because different plot functions behave differently. This procedure does not match the data. The catplot() method in this module is designed to work with categorical data efficiently. This method was designed to optimize the factorplot() method in the seaborn module’s recent releases.

It enables us to work efficiently with categorical values and render the data into eight various sorts of graphs, as defined by the kind parameter. Because the catplot() method produces a FacetGrid() type object, it can be used to plot graphs for several aspects of the same figure instantly.

Catplot() utilizes a scatterplot by default for datasets. A scatter plot, in which all points that belong to the same category fall in the same place along with the axis referring to the categorical variable, is one of two types of categorical plots that use distinct methods to represent categorical data.

Stripplot(), which is “kind” by default in catplot(), takes this approach.

The second method is to use an algorithm to change the points with the category axis to avoid overlapping. It will let us visualize the range of observations more accurately. This type of plot is referred to as a “beeswarm,” and it is implemented in Seaborn as swarmplot(), which may be accessed by specifying kind=”swarm” in catplot().”

Syntax of the Catplot in Seaborn

The description of each parameter is passed in the catplot function.

x and y: These are the name of the variables for long-form data inputs

Data: For graphing, a long-form (clean) dataset. Each variable should be characterized by a column and every single observation by a row.

row and col: The grid’s faceting will be controlled by categorical parameters.

ci: The width of the confidence intervals should be drawn around the estimated values. If “sd,” skip the bootstrapping and show the observations’ standard deviation instead. There will be no bootstrapping and no error bars if None is specified.

Kind: A categorical x-axis and y-axis plotting function’s name matches the type of plot to draw. “strip,” “swarm,” “box,” “violin,” “point,” “bar,” or “count” are among the available options.

color: Color for all elements or a gradient palette’s seed.

palette: Colors to utilize for various hue levels. It should be a dictionary translating hue values to matplotlib colors or anything that color palette() can understand.

kwargs: The basic plotting function receives the other keyword arguments.

Category plots are your greatest tools for visualizing and comparing different elements of your data if you’re working with data that contains any categorical variables, such as survey responses. Seaborn makes plotting categorical graphs a breeze. The labels of the aspects in your data are x,y, and hue in this example. Concerning the target variable, hue parameters encode points with distinct hues.

In our first example, we have taken common built-in dataset tips in seaborn. In the load_dataset function, we have called it. Then, we have a catplot function where the x argument is passed with the total_bill column name, the y argument is set with the column name time, and the hue argument takes values of the column smoker. The code is affixed here that will display the catplot in seaborn.

From the catplot function, the plot is visualized like this. 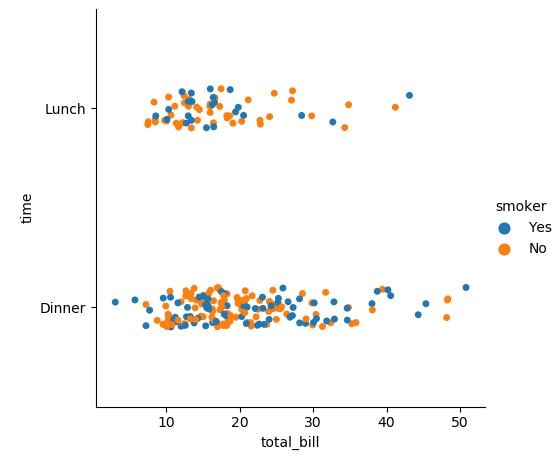 We used data parameters to feed the data into the count plot and specified a count to the kind parameter. There we have styled our plot background with the ticks option. Then, we chose an iris dataset for making the plot. The catplot function is used in which we have utilized the columns from the iris dataset. The argument passed inside the catplot is the x. The categorical parameter has the column name petal_length. The third is the kind parameter to which the count is assigned. The code is affixed here that will display the catplot in seaborn.

A bar plot is another popular option for displaying categorical data. In the case of the count plot, we just needed one parameter. One category and one quantitative variable are frequently used in the bar plot. Let’s look at exactly how the times compare. Here, we have again taken the iris dataset for rendering the plot. Inside the catplot function, after specifying the x and y arguments. We have a kind option set to the bar. The bar plot will be rendered from the catplot function. The code is affixed here that will display the catplot in seaborn.

As in the output, you can visualize the bar plot figure. 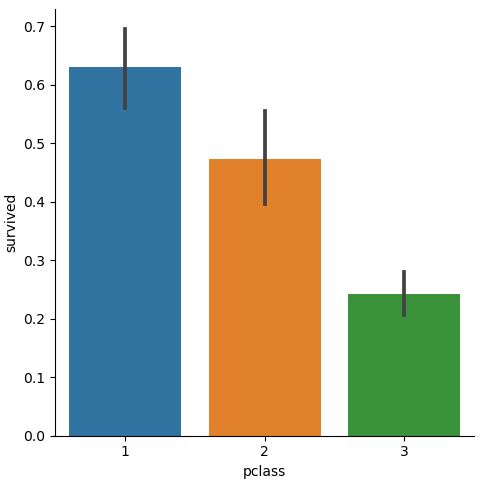 Box plots are graphics that are a little complicated to grasp at first but effectively illustrate data dispersion. Starting with a box plot as an example is the finest way to describe the concept. Begin with the catplot function in the following script; we have a comparison of smoker and total_bill from the tip dataset as we have set these to the x and y arguments. The kind option here is set as a box. The plot rendered will be a box plot from this catplot function. The code is affixed here that will display the catplot in seaborn.

The following figure visualizes the box plot below.

The violin plot is also included in the categorical plot. We have declared the kind parameter with the violin inside the catplot function. This function generates the violin plot representation here. The code is affixed here that will display the catplot in seaborn.

The clear representation of the violin plot in the below snap. 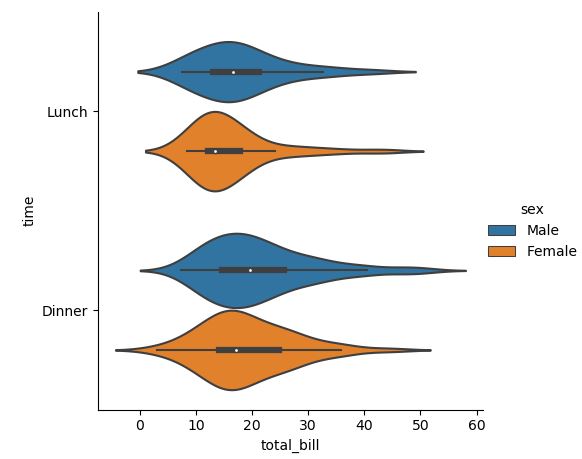 The purpose of this tutorial is to show you how to use Seaborn’s catplot() function to create the most frequent category plots. With each argument supplied inside the catplot function, the syntax is displayed. The three most popular categorical plots have been covered. Count, bar, and box graphs are examples of these charts.