Scala is itself a very diverse language when it comes to different collections or packages. One of its collections is the “Vector” collection which can be utilized to access random values in the form of a list. Using the vectors, we can manipulate random values of lists using different functions of vectors. It enables persistent time access to the values, allowing for simple access plus modification thanks to using a vector. Within this tutorial on Scala programming, we will discuss the creation and modification of vectors using simple Vector functions of Scala programming. So make sure to have Scala configured on Ubuntu 20.04.

Before jumping to the implementation of Scala code in a Scala file, we recommend you use the Scala command line to create vectors and manipulate them accordingly to understand more. So we tried the “scala” keyword in the query area to open the Scala shell as displayed.

To create a single vector “vec”, you need to utilize the “Vector” function along with some values in its brackets. As the output shows, we added the Integer values for this vector:

The same way can be used to create a String type vector “v”, as demonstrated below:

Empty Vector
To create an empty vector “x”, you need to leave brackets “()” empty as shown below:

Using the “toVector” Function
You can also create a vector using the toVector() function of Scala programming by specifying the start and end point of an integer range using the “to” keyword in the brackets, i.e., from 2 to 7. The output shows that the vector has been created starting from 2 and ending at 7.

Using “range” Function
You can utilize the range() function to build a new vector with a specific range, i.e., 6 to 10. The endpoint would be excluded from the output vector, as displayed:

Using the “fill” Function
The “fill” function can let you create a vector by repeating a single value as many times as you want, i.e., we have been making a vector with the “scala” element repeated twice.

Using “tabulate” Function
The tabulate function allows you to create a vector of specified size by letting us specify the first element. The rest will be updated by itself, i.e., the starting point is 3, and a total of 5 consecutive elements have been added to this vector.

You can append a new element in an already built vector. We have created a vector “x” with 5 elements and created a new vector “y” using the “x” vector and appending 12 at its end.

Within the append method, we can also utilize the Seq() function to append multiple numbers in a vector as we did in the following image, i.e., add 13 and 15 at the end of vector “x” and save to “y”:

Here, you can append the value at the start of any vector, i.e., by specifying it before the “+” sign in the following line of code:

You can also drop the vector elements while displaying them without complete removal. For this, you can use the “drop” function with a total number of elements to be dropped from the start of a vector “v”.

The map function of Scala can be applied to all elements of a vector “v” to get a new sequence via a specific number, i.e., we have been multiplying vector “v” by a number 3 using the “8” sign.

The reverse function of vector collection can be cast-off to reverse the order of a vector list. Thus, we have tried this reverse() function on vector “v” and got the reversed vector.

The union function can combine two vectors in one, i.e., as we have combined vectors “x” and “y” in the following output:

The “isEmpty” function can inform you whether the particular vector is empty or not by showing a Boolean result. And the size function of vectors can tell you the exact size of a vector.

We will be using an example of Scala to elaborate vectors more clearly. This time, we will be creating a string vector. Thus, we have created a Scala file in Ubuntu 20.04 and imported the immutable collection of Scala at its first line. After that, we created a test class object containing a main() function definition. We have created two string vectors, v1 and v2, including 2 and 1 values, respectively. 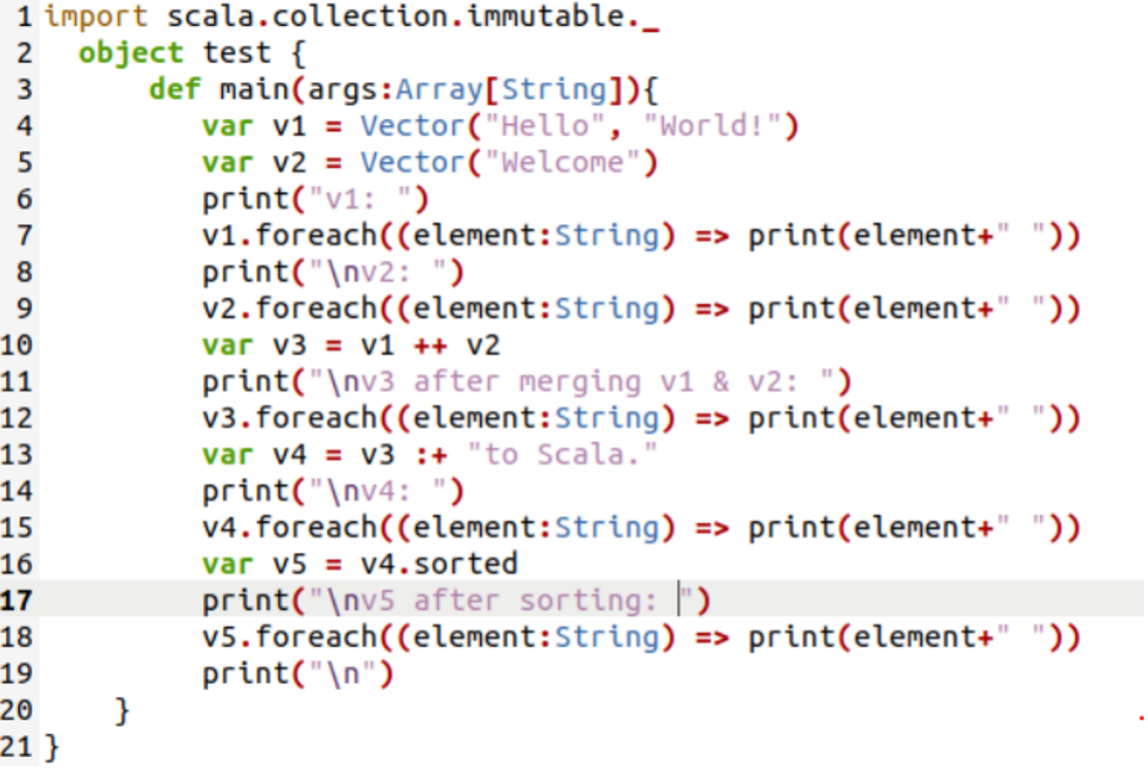 We have compiled the test.scala file using the “scalac” compiler and executed its object file “test” using the “scala” instruction. The output displays vector v1 and v2 separately, merging v3 of v1 and v2, adding “to Scala” to v3 as v4, and sort v5.

We started this article’s implementation by defining the vectors and explaining their use in Scala programming. After that, we utilized the Scala command line to create vectors, merge vectors, append and prepend values to vectors, and perform different functions on the vectors. All the examples were explained using the integer type vectors. We have concluded this article using a simple Scala program containing the creation and manipulation of string vectors.