What is Substring() in Scala:

As substring is the subset of string between two indexes. Substring() functions are used to get the specified part of a string from a given string in Scala. However, we have a defined string that starts and ends specified index.

Syntax of the Substring() function in Scala:

The general syntax of the Scala substring() is given below:

How to use Substring() in Scala:

To understand the basics of using the substring() function in Scala, we should take a look at the examples:

In the example, we will pass an “int BeginIndex” argument that is the starting point of a specified index of a substring from a given string. Let’s have the execution of the code and see as it will return the substring at the end of the input string. For this, we have an example code below.

In the above program, we have declared a Scala class with the name “example”, and in our main() function of a class, we have created a variable “var” with the name “new_str” that is basically an input string followed by calling Scala substring() function. We have passed a value “20” as the starting index for the substring, so it starts from index 10 and returns the result at the end of the string. Here we are just mentioning the beginning index, not the end index. We are printing the “new_str” string to get the substring.

As you can see, we have the end index substring from the input string that is shown below on the terminal screen.

As we have mentioned above in the syntax of the Scala substring() function, that it takes two parameters now in the example program, we are taking both the parameter as an argument that is “int beginIndex” and “int endIndex”. These parameters will act as the starting and ending indexes of the substring. For instance, we can see the example program for better understanding.

In this example, we have a Scala class as “substr” which defines our main() function. In the main() function, we have the “str1” variable as a string, and we are concatenating “str1” with other strings through print statements. We have the “str2” variable here in which we are calling substring() function and assigned begin index as “0” and end index as “10” that get us as a substring in between these index values. Here also we are concatenating the “str2” with the other string. We will get a substring and a modified string by printing the strings.

The output of both the string “str1” and “str2” is displayed below.

We are taking one negative scenario of the substring() function in Scala to check whether the value string takes the type parameter or not. We will get to know this after executing the particular example program. See the program of the example below.

As in the above code, we have a class “substr” that defines the main() function for our class. The main function has a variable with “str1” that inputs a string here. Then we have another variable, “str2” with having a string. Note that in the last print statement, we are passing “str2” with the type parameter with “2”. Let’s have a look at executing the example. 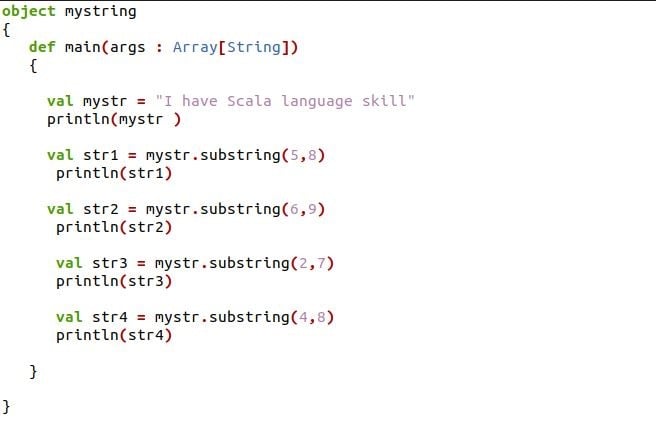 First, declaring the substring() class in scala and named that class with “mystring”. Secondly, we have our main() function that stores all the programs of the class. In the main function, we have assigned a variable to a string that represents “mystr” and side by side; we are printing the strings. Then we have four strings with the names “str1”, “str2”, “str3” and “str4” with a start and end index, which will get the substring by using the substring() function in Scala.

Displaying the implementation of the above program, we have an output for each specified index value.