Ordering or organizing the components in a sequential or alphabetical sequence is the process of sorting. A unique sorting function for both mutable and immutable Scala collections is developed and is referred to as Scala Sort. One or more attributes of a Scala collection can be sorted using the SortyBy function. It uses a function that is specified on the user side to sort the components of a collection. The SeqLike trait includes it. To sort the collection according to our needs, we can utilize a variety of data structures and the SortBy function. We will study the Scala SortBy on this topic.

Syntax of the SortBy Function in Scala in Ubuntu 20.04

The SortyBy function sorts the elements of a collection list that is either mutable or immutable. Internally, it makes use of the merge sort algorithm which separates the element list into sections and sorts across them. Unless a sorted collection result is reached, this continues recursively. The SortBy function accepts several characteristics to sort the collection with the components arranged according to the first attribute first, then the second, and so on.

This SortBy requires two parameters: the function to use and the attribute to sort by.

Example 1: Using SortBy for Sorting an Array in Scala

The SortBy method can be used to order the objects according to one or more class attributes in Scala. If the scope contains an Ordering field type, we can utilize this approach. The ascending order is also the normal sorting order in this case. 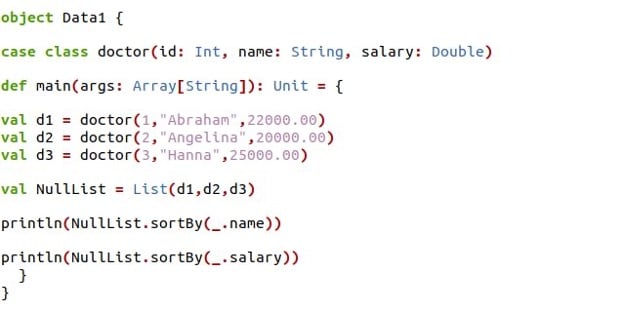 The output shows both sorted lists generated by the SortBy function based on the “name” and “salary” attributes.

Example 2: Using SortBy for Sorting an Array in Reverse Order in Scala

In the previous code, we utilized the SortBy function to sort an array and it sorts the array in ascending order. By slightly altering the procedure, we may put the data in descending order as follows:

Inside the “Data2”, we have a “fruit” class with the defined attributes “id”, “name”, and “price”. Each attribute is set with the data type. Then, we set the main method where we assigned three variables – “f1”, “f2”, and “f3”. The “fruit” class is invoked inside each variable. We assigned the attribute’s value to it.

Next, we generated the empty list which is initialized inside the “Emp_List” variable. We assigned the SortBy function for sorting the data in reverse order to the println statement.

The sorted data is obtained based on the “name” attribute in descending order as shown in the following prompt:

Example 3: Using SortBy for Sorting By the Second Attribute in Scala

As you can see in the output, we repeated the names of the students. So, the SortBy function sorted the data according to the second attribute which is “marks”.

Example 4: Using SortBy for Sorting a Map Value in Scala

Using the SortBy technique, we may order the map by key, either from low to high or from high to low. Let’s attempt to better comprehend it using an example:

To use the ListMap, we imported the Scala package for it. Then, we created the “Data4” object and called the definition of the main method inside it. Next, within the main section, we declared the variable “map” and set the map function in it.

From the SortBy function, we sorted the map by value in a Scala map sequence. The outcome for the sorted map is displayed in the following screenshot of the terminal:

From the aforementioned article, we learned about the SortBy functions in the Scala object-oriented programming paradigm. We discovered that by using the SortBy method, we could create an ordered, sorted collection with just one line of code. We learned how the Scala SortBy method works with several attributes to sort the data appropriately. As a result, the Scala SortBy provides a clear and effective method for sorting in Scala.