What is the Approach to Using a Mutable List in Scala?

A list in Scala consists of immutable data, which means we can’t change, create or delete it in Scala. From the ListBuffe,r we can access elements at a specific index, then we can add and remove the elements. We can add, change and remove elements in the list by using ListBuffer. After that, convert the ListBuffer to a list when needed.

The example we have is for creating instances of ListBuffer. To use ListBuffer, we have to import scala.collection.mutable.ListBuffer class. Then an Instance is created for ListBuffer. 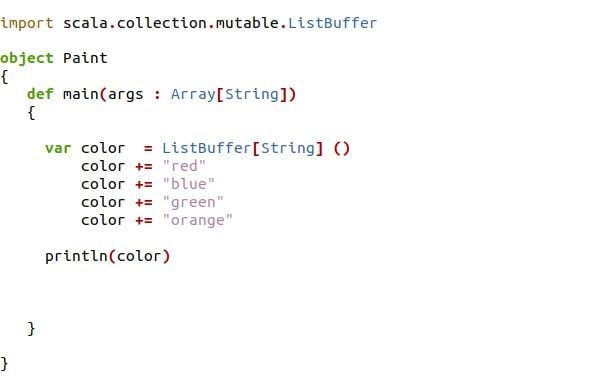 In the above instance, we have a class called “paint”. The class “paint” defines the main function implementation of the code. In our main function, we have a variable with the keyword “var” which is defined as “color”. The Instance of ListBuffer is declared in the variable “color” with the data type as a string. The ListBuffer is initially empty. We can add elements in the given ListBuffer. Here we are adding elements just by calling the variable name ” color” with the ” +=” operator. Lastly, print the statement by calling a variable “color” in the print function.

The output shows the ListBuffer values in the image below.

Example # 2: Using Mutable List with ListBuffer for Accessing the Elements:

With the help of ListBuffer, we can access the elements the same as the list. For accessing the elements of the ith index, we have to use ListBuffer(i). 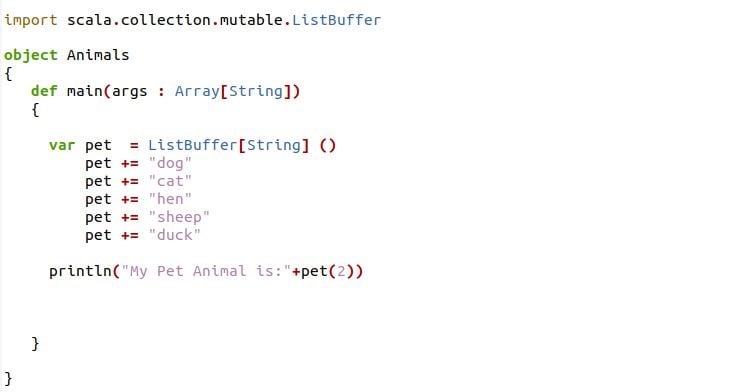 The 2nd index value from the ListBuffer is “hen” which is shown as the output below.

Example # 3: Using Mutable List with ListBuffer for Adding the Elements:

To append the elements in the list, we have two methods. One is using the “+=” operator, and the other is using ListBuffer.append(). If we want to add or append two or more elements, then the method uses a “varargs” parameter. Let’s execute an example program of this method. We are using both the methods in the code below. 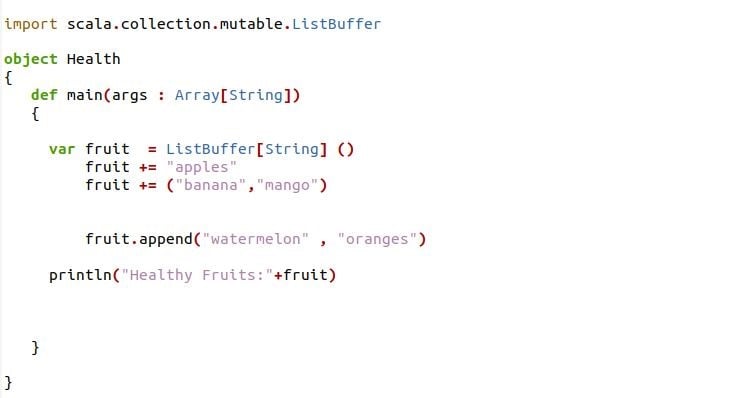 As you can see in the above code, the class object is represented with the name “Health”. The class “fruit” calls the main function for initializing ListBuffer. The variable “var” is defined as “fruits” with a ListBuffer of data type as a string. Now we use the “+=” method and append() method side by side to add elements in the ListBuffer. By printing the statement, you can see the output.

The output ListBuffer has all the elements that we want to append.

Example # 4: Using Mutable List with ListBuffer for Deleting and Removing the Elements: 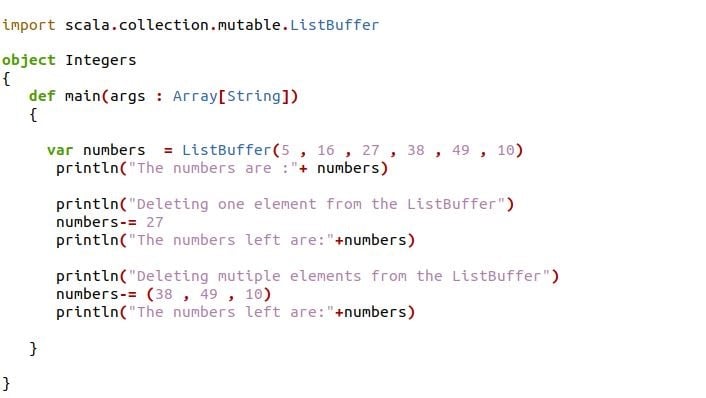 We have successfully deleted all the elements from the ListBuffer, as shown in the image below. 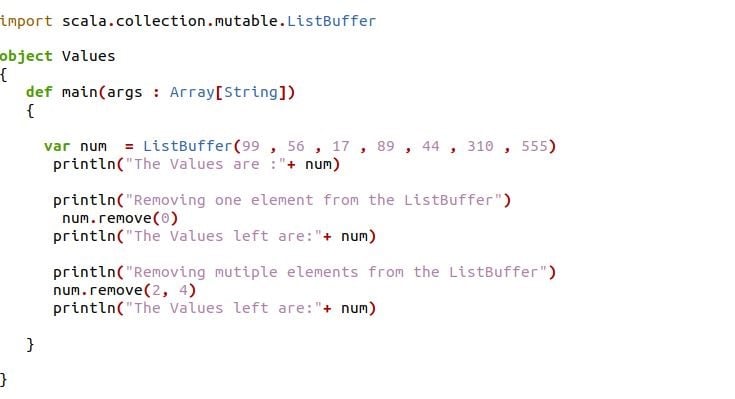 The above code is for removing the elements from class “Values”. As seen in the code, we have assigned different values of ListBuffer in a variable “num”. From these values, we will remove some values by passing the different index values in the num.remove() method. Firstly, we gave the index value 0, and then we gave a start index 2 and the end index 4. After that, we have a print statement to verify that values are removed or not.

The output shows the working of the remove() method as it has removed all the values from the ListBuffer.