A Scala Implicit is a keyword that is used within this programming language with variables in it. This concept is used whenever the programmer does not want to do something himself but wants to assign that duty to the compiler. This article will try to explore the concept of Scala Implicit in-depth in an Ubuntu 20.04 system.

What is Scala Implicit?

As we have already stated that a Scala Implicit is simply a keyword that is used in this programming language, therefore, now we will try to dig deeper into the functionality of this keyword. In the Scala programming language, we can create implicit parameters by using the Implicit keyword. An implicit parameter is one that can take implicit values according to the context when no other value is explicitly assigned to them. Whenever we do not assign any value to a variable in Scala, the compiler always looks for the implicit value and automatically assigns it to that variable.

Some of the most important features of the Scala Implicit are as follows:

To learn more about the usage of the Scala Implicit in the simplest possible ways, you need to check out the following two examples:

In this example, we want to design a program that multiplies two numbers together. However, we want to perform this multiplication by keeping the multiplier implicit. To understand this strategy, you will have to visualize the Scala code shown below:

In this simple Scala script, we have created a class named “Implicits” with the “object” keyword and have defined our “main()” function within it. After that, we have created a value with the name “multiplicand” and have assigned to it an integer i.e., 12 in this case. Then, we have defined another value named “multiplier” while keeping it implicit with the use of the “implicit” keyword, and then, we have assigned to it another integer i.e., 2 in this case. Here, we would also like to state that a multiplicand is a number that is supposed to be multiplied whereas a multiplier is a number by which we wish to multiply the multiplicand.

Then, we have defined a function named “multiply”. This function is capable of accepting an implicit integer. We have named it “by”. We have equalized this function to the result of the statement “multiplicand * by”. It means that if we have created an implicit variable in this script, (which we have already done) then while performing the multiplication operation, the “by” variable will be replaced by the value of that implicit variable. It implies that in our particular case, 12 will be multiplied by 2. After that, we have assigned the result of the “multiply” function to a value named “output”. Finally, we have printed this output on the terminal using the “println” statement.

The Scala script that we have just created above can easily be compiled with the following command:

Then, its class file can be executed with the command shown below:

The result of the Scala script that we have created in this example is shown in the following image. It verifies that the output of our “multiply” function i.e., 24 is absolutely correct.

Example 2: Printing Messages on the Terminal with and without the Scala Implicit 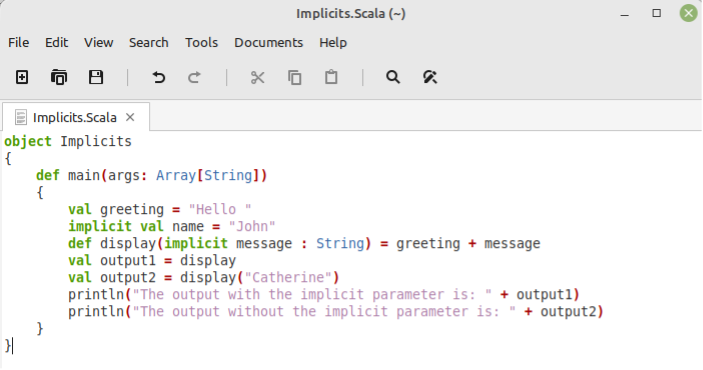 Then, we have defined a function named “display” which is capable of accepting an implicit string named “message”. We have equalized this function to the statement “greeting + message”. It means that this function will display the combined values stored in the “greeting” variable and the implicit “message” variable. After that, we have defined a value named “output1” and have assigned to it the result of the “display” function. Then, we have created another value named “output2” and have also assigned to it the result of the “display” function, however, this time, we have called this function using a different string i.e., Catherine. Because of this, the implicit value will not be used for calculating the “output2” rather the newly passed value will be used. Finally, we have used two “println” statements for printing both of these outputs on the terminal.