Regarding the higher-order functions, some key points include:

Example 1: Using a Function to Take Another Function as an Argument

Let’s consider the first example of a higher-order function. We pass the function in a given function as a parameter. 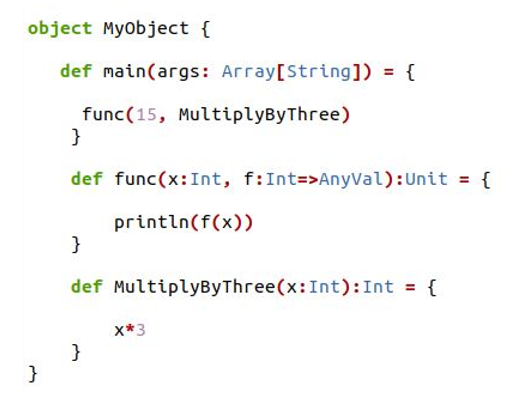 An anonymous function does not have a name but performs the same function. When you don’t intend to repeat a function later, creating an anonymous version is a good idea. In Scala, the wild card operators “=>” rocket and “_” underscore can be used to generate anonymous functions.
Here is one to illustrate: 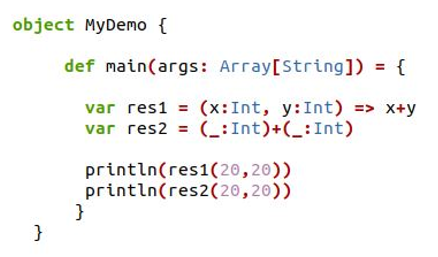 The results for both the anonymous functions are generated as follows: 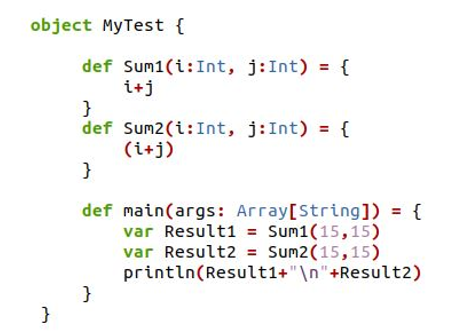 The object “MyTest” has the definition of three functions. The first function is defined as “Sum1” which takes the parameters “i” and “j”. The input values “i” and “j” are set as “i+j” inside the function “Sum1” block. Next, we have another function as “Sum2” which also takes the input values and also set the operation “i+j”. After that, we defined the main method where two variables “Result1” and “Result2” are declared. These variables are called the functions “Sum1” and “Sum2” for passing the values against the “i” and “j”.

The output obtained by both functions “Sum1” and “Sum2” have the same results. 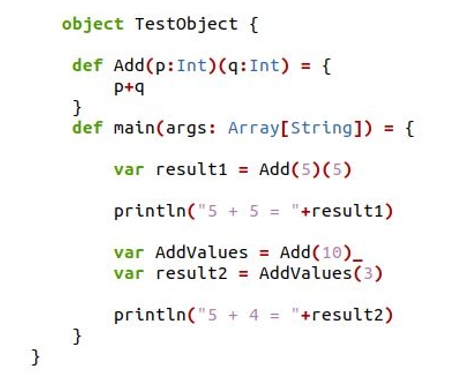 Here, we created a function “Add” which takes two arguments separately. The “p” is the first argument and “q” is the second argument. Then, we declared a variable “result1” in the main method. The variable “Result1” is called the “Add” function and set the values for “p” and “q”. Also, we passed the single argument for the “Add” function which is called in the variable “AddValues”. The AddValues also takes the argument values of a number.

The results for the previous code upon compilation are as follows: 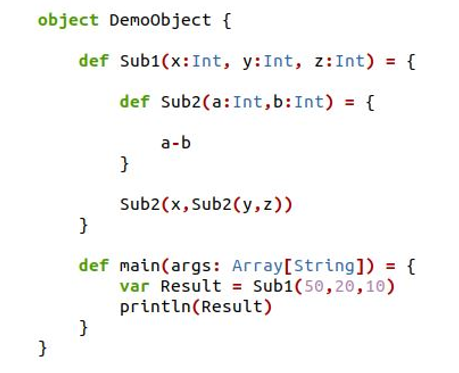 Within the function “Sub1”, we defined another function “Sub2” which evaluates the difference between “a-b”. Outside the Sub2 function, we called the “Sub2” which takes the argument value “x” and the “Sub2(y, z)”. Next, we declared a variable “Result” which is called the Sub1 function and passed the numeric value to be evaluated for different operation.

The following is the different operation result generated by the previous code:

You can define the functions with parameters of variable length in Scala. Any quantity of arguments can be passed when calling the function. 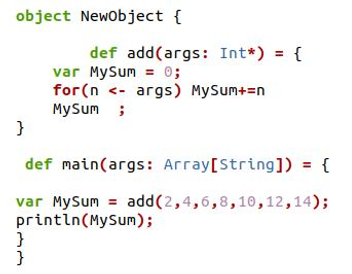 To the function “add”, we set the variable “MySum” which is initially zero. Then, we have for loop which iterates over the numbers and increments by the MySum. Inside the main, we called the add function and passed the numerical values to it.

The length of the variable “MySum” is printed on the screen.