The Hello World Script in Scala Using the Text Editor

A simple way to implement a basic Hello World script in the Scala programming language is by using any text editor present on your system. You first need to create a file with any name of your choice with the “.Scala” extension within the Home directory of your system. We have named our file “HelloWorld.Scala”. After opening this file, we wrote the script shown in the image below:

Now, we will try to understand all the components of this Scala script one by one. First, we have created a Scala class named “HelloWorld” with the “object” keyword. This will act as a driver class for our Scala script. Then, we have created the “main()” function for our Scala script. The “args: Array[String]” notation refers to the arguments of this function. Basically, the “main()” function is also capable of accepting command line arguments. Now, within this function, we wanted to insert a comment for easier understanding.

The single liner comments in Scala can be inserted with double forward slashes “//”. Then, we just wanted to print a Hello World message on the terminal for which we have used the “println” statement. This, in fact, serves as the actual functionality of our current Scala script. Then, we have just saved our Scala script.

How to Compile a Scala Script?

A Scala script can easily be compiled by using the following command:

How to Execute a Scala Script?

You can execute a Scala script with the command shown below:

Here, HelloWorld represents the name of our driver class within our Scala script. The class file created in the step shown above can only be executed with the help of this command.

We can make our Hello World program a little complex by introducing the command line arguments to it. For that, you can write a Scala script similar to the one shown in the image below: 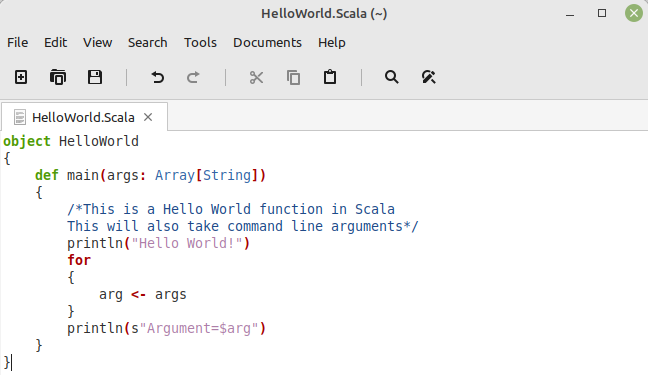 This Scala script can be compiled in the same way as we have explained above, however, its execution will differ slightly. To execute this Scala script, we have used the following command:

Here, HelloWorld is simply the name of our driver class, however, “One”, “Two”, and “Three” are the command line arguments that we wanted to pass on to our Scala script. You can pass any arguments of your choice to this Scala script. Moreover, the number of arguments can also vary depending upon your requirements.

Upon execution, this Scala script exhibited the output revealed in the image below. You can see that along with displaying the Hello World message, this script also printed the command line arguments on the terminal.

A yet another simple way for printing a Hello World message in Scala is by using Scala REPL which is a command line interpreter shell for Scala. All you need to do is to gain access to the REPL shell and then you will easily be able to print a Hello World message in it. For entering the Scala REPL, you need to execute the subsequent command in your system’s terminal:

The Scala REPL shell looks something like shown in the image below:

While staying within this shell, you just need to run the following command:

As soon as you will hit the Enter key after typing this command, the Hello World message will appear on your Scala REPL shell as shown in the image below. This is how you can easily print such a message without even having the need of creating a separate Scala script for it.

In this guide, we wanted to discuss the purpose of the most basic program of any programming language i.e., the Hello World program especially, with respect to the Scala programming language. With the help of this program, we also wanted to talk about certain important components of a basic Scala script. We also shared with you how a Scala script can be compiled and executed. In short, we shared with you the two main methods of printing a Hello World message in Scala i.e., the script-based method and the Scala REPL method. By using either of these methods, you can instantly print a Hello World message in Scala whenever you need to.