This tutorial explains the route command and how to use it in Linux to administrate connectivity between different networks.

All steps described in this tutorial include screenshots, making it easy for every Linux user to understand how they are applied.

The command you are looking for, route add, is the command to interact with the routing table, the command to add proper routes to reach the destination or multiple destinations. You can add more than one gateway to access different networks depending on the chosen routing method explained below.

It is also essential to know that those network devices allowing connectivity between two networks is called “gateways”. Gateways must have two network cards, each connected to the networks we want to connect between them.

Static vs. Default vs. Dynamic Routing

There are three different methods to implement network routing: static, default, and dynamic. Each has advantages and disadvantages depending on the network topology and knowledge. They are explained below in this article.

Static routes are the most specific ones. The static route means both networks must configure their network devices (one by one), instructing the full path (route) each device from each network must follow to reach the other network. It is essential to understand that when using a static route, all devices like computers must be configured manually.

As said previously, routing devices must have two network cards or interfaces to communicate with both networks.

If a client from the NETWORK 2 wants to connect to NETWORK 1 (Inverse), it also will be required to add the inverse route or path (including its router but without including the NETWORK 1 router, which is already connected to NETWORK 1). 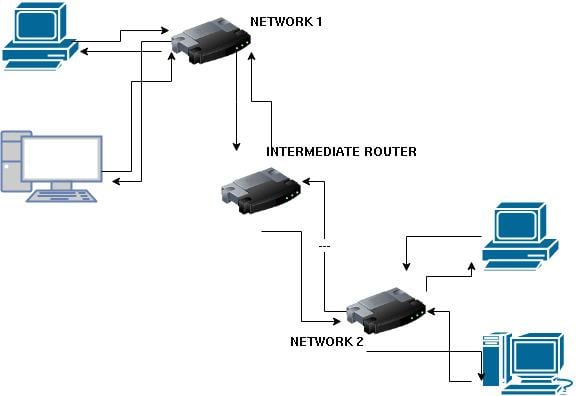 Static routes are the fastest and safest routing method. It is fast because clients provide routing devices the full path, while routers must learn them by themselves in other methods.

And it is safe because sysadmins hold full knowledge of the network topology, and packets go precisely through the defined route (Path).

The most significant disadvantage of static routing is that each client must be configured manually, which is not practical for big networks.

It is called “static” because each client predefines routes.

Dynamic routing is when there are no routing tables, and routers exchange or share all their information with other routers. They learn the network topology by sharing information. As said previously, with static routes, the packet is dropped if some router defined in the path is unavailable. Contrary to static routing, the dynamic one in such cases looks for an alternative since it does not have a predefined route.

Practical Introduction to the Route Command

Before adding or removing routing tables, let’s see how you can print existing routes. You can do it by running the IP route or route commands with superuser permissions, as shown below.

Note: To use the sudo route add command, you must install the net-tools package.

The screenshot above shows that the default gateway is my router with IP address 192.168.0.1, connected through the wlp3s0 device and getting the IP address from DHCP.

The second and third lines are irrelevant. The second is generated in case of an IP assignment problem, and the kernel assigned the third line.

If you have installed the net-tools package on your computer, you can also run the following command to see the existing tables.

The Route Add Command in Linux for Static Routing

You can do the same using the IP command with the following syntax.

The Route Add Command To Define the Default Gateway in Linux

The syntax is shown below if you want to add a default gateway using the route add command.

If I want to add a default gateway to access the internet and my router has the IP address 192.168.0.1, I would execute the following command:

The same can be done with the IP command shown below:

All changes you make in the routing table will be automatically deleted upon reboot or if the network service restarts.

Add the following line at the end of the screen shown in the previous screenshot.

In CentOS systems, you need to edit the /etc/sysconfig/network-scripts file and add the following line:

If you want to remove the default gateway, you can run the following command (based on previous examples):

Both methods are acceptable.

As you can see, understanding routing tables is easy as long you have basic networking knowledge. From the middle level, there are no pretexts to avoid this subject. This may save you if you try to connect to a network failing to assign you an IP address with DHCP requiring you to fully configure your device with a proper IP address and the correct routing table. It is essential to say the route add command was replaced by the IP route add command. However, most sysadmins still use the first command belonging to the net-tools package (I recommend you to install it), which includes additional features such as the ifconfig command. Many users consider net-tools methods to be easier. Others also prefer it despite the IP command implementing additional features. The important thing is both methods are acceptable and give the same results. You don’t need to learn both of them as long as you know how to read their man pages.

Thank you very much for reading this article explaining routing tables and using the “route add” command. Keep following us for more professional Linux tutorials.