A whole array cannot be provided as a parameter to a function in C++. Although, we would assign a pointer to an array without defining an index by indicating the array’s title. We will have to specify an attribute formalized argument in it if we decide to provide a single-dimension array as a parameter in a method. And when we are providing a 2D array as an argument returns a pointer to that of an array rather than a pointer to a pointer.

Utilize Pointer NotationFor large structures, having returned them through a pointer effectively retrieves them by data. Because the 2D array will become relatively large, it’s recommended to provide the pointer to the matrix’s initial component, as seen in the following instance. The 2D array argument in UpdatedArr is declared with arr[][SIZE] format to retrieve its components using brackets in the operation scope. 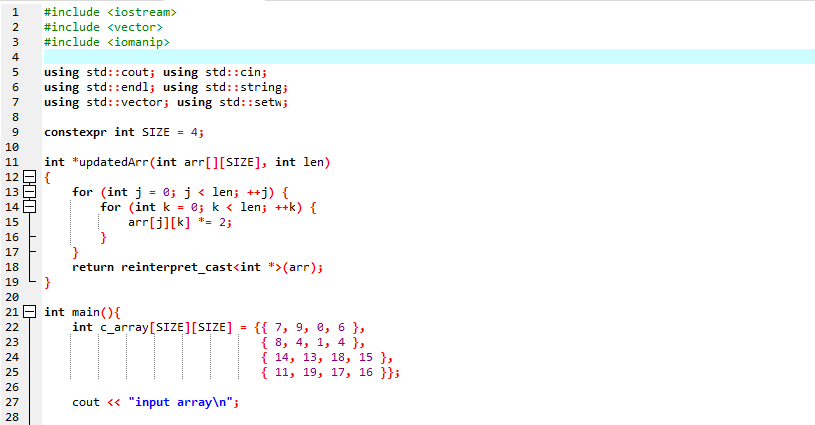 At the beginning of the program, we have to introduce three header files. <iostream> is used for input and output functionalities. <vector> is included to hold components of the same data types. <iomanip> is used for operating the outcome of the program.

After this, we utilize the standard function ‘cout’ for output purpose, ‘cin’ for input purpose, ‘endl’ for next line, ‘string’ for declaring strings, ‘vector’ provides the containers that denote the arrays that could modify their dimensions during runtime and ‘setw’ function that specifies the width for output procedures.

In the same way, we employ another ‘for’ loop, which is implemented for the array’s columns. Now we call the main() function. Here we define the array. This array contains 4 rows and 4 columns. We apply the ‘cout’ command for printing the statement ‘input array’.

In addition to this, we apply the ‘for’ loop for the input array. The first ‘cout’ prints the ‘[‘ and then for loop is used to declare the elements of the array. Here we define setw() function. It specifies the field width applied for output processes. We have been using the ‘cout’ to print the ending bracket ‘]’ of the array.

First, we initialized the variable ‘j’ then we set the condition ‘j<SIZE’ and incremented its value. Similarly, the next ‘for’ loop is utilized for columns of the array. Then we employ the setw() method. This function contains the pointer for the array and the size of the array as parameters.

Utilize The Pointer To Pointer Technique

To retrieve the array from within the function, we would utilize a pointer to pointer procedure. If the entities to be retrieved are dynamically generated, this approach provides a significant advantage over everyone else. Once the pointer is received in the operator scope, it’s generally good to update the object accessible condition. It’s important to note that we convert the array reference to int* before denoting the elements.

First of all, we will integrate three important libraries. The header file <iostream> could be used for input and output procedures. <vector> is being used to hold components of identical data types. In contrast to arrays, the dimension of a vector may increase continuously. During the implementation of the program, we will adjust the dimensions of the vector to meet our needs. <iomanip> is used to evaluate the program’s response.

Following that, we have been using standard functions such as ‘cout’ for output, ‘cin’ for input, ‘endl’ for the next line, ‘string’ for defining strings, ‘vector’ for denoting arrays that might change their attributes during execution, and ‘setw’ for specifying the width for output processes. We now adjust the array’s size and save it in the variable ‘SIZE.’ The updated array’s pointer would then be initialized. The size and length of the array are provided as arguments to the ‘updatedArr()’ method. The ‘for’ loop has been used.

The statement ‘input array’ is displayed by using the ‘cout’ command. In addition, the input array is processed to a ‘for’ loop. The initial ‘cout’ outputs the ‘[‘, and after that for loop asserts the array’s elements. The setw() function can be expressed here. The setw() method is a C++ operator for adjusting the width of a variable. The operator provides the minimum range of character sets a component would require or changes the ios library variable width. This method allows users to customize the sample width for output procedures.

We’ve used the ‘cout’ command to display the array’s closing bracket ‘]’. We’ll also apply ‘endl’ for the next line. For the updated array, we now define pointer ‘**pt2’. As parameters for the updatedArr() function, we’ve specified the size and input array. We use ‘cout’ to present the ‘updated array’ phrase. We defined the condition ‘j<SIZE’ and incremented the value of the variable ‘j’, after which we initialized it.

A similar ‘for’ loop will be used for the array’s columns. The setw() function is then applied. Finally, the program is exited with the command ‘return EXIT_SUCESS’.

ConclusionThis article has discussed two methods: pointer notation and the pointer to pointer approach of returning the two-dimensional array from a function. Returning a whole array as a parameter is not supported in C++. The method for returning arrays from a function is determined by the method for integrating different dimensions.