Python is a powerful programming language. It has many libraries for building REST or RESTful APIs. One of the popular library for building web apps and writing REST APIs is Flask.

In this article, I will show you how to create REST API in Python using Flask. Let’s get started.

You should be able to find articles and tutorials on all these topics on LinuxHint.com

I will be using Python 3 on Debian 9 Stretch in this article. If you’re using Python 2, you will have to adjust a little bit. You should be able to figure it out yourself as it will be simple as writing python instead of python3 and pip instead of pip3.

To put it simply, virtual environment is used to isolate one Python app from another. The Python package used to do that is virtualenv.

You can easily install virtualenv using PIP on your computer with the following command:

Now create a project directory (let’s call it pyrest/) with the following command:

Now create a Python virtual environment on the pyrest/ project directory with the following command:

Now navigate into the project directory with the following command:

Then, activate the Python virtual environment with the following command:

In this section, I will write a hello world program in Python Flask.

First, create a file hello.py in your project directory:

Now add the following lines to hello.py file and save it.

In the next section, I will show you how to run Flask scripts.

As you can see, the correct output is printed on the screen.

GET request on REST API is used to fetch information from the API server. You set some API endpoints and do a GET request on that end point. It’s simple.

First, create a new file get.py in your project directory with the following command:

Now add the following lines in your get.py file and save it.

Here, on line 1, the Flask constructor function and jsonify function is imported from the flask module.

On line 3, a Flask object is created and stored on app variable.

On line 5, I created a Python array of dictionaries of some dummy data and stored it in the accounts variable.

On line 10, I defined the API endpoint /accounts and the request method, which is GET.

On line 11, I defined the function getAccounts(). getAccounts() function will execute when a GET request to /accounts endpoint is made.

Line 12, which is a part of getAccounts() function, I converted the accounts array of dictionaries to JSON using jsonify() function and returned it.

Now run the Flask API server with the following command:

Now make a GET request to the /accounts endpoint with CURL as follows:

As you can see, the accounts data is displayed as JSON format on GET request on /accounts endpoint.

You can also get specific account data as well. To do that, I am going to create another API endpoint /account/<id>. Here, <id> will be the ID the account holder. The ID here is the index of the array.

Edit the get.py script and add the marked lines to it. 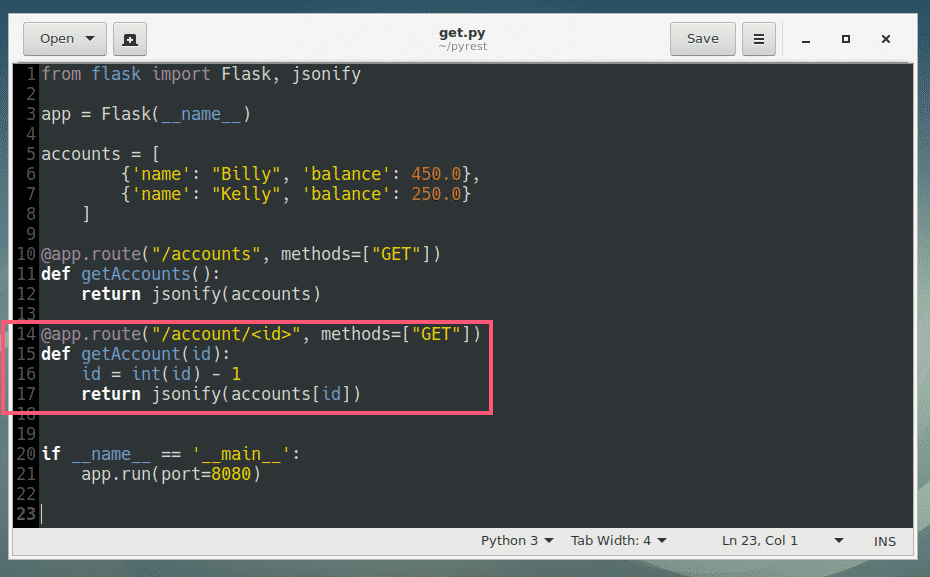 Here, on line 14, I defined the API endpoint /account/<id> and the method to be used, which is GET.

The rest of the codes are the same.

I requested data for account 1 and 2 separately and I got the expected output as you can see from the screenshot below.

Now I am going to rename get.py to api.py and add an API endpoint /account for adding new data.

First, add the lines (19-26) as marked in the screenshot below to the api.py file. 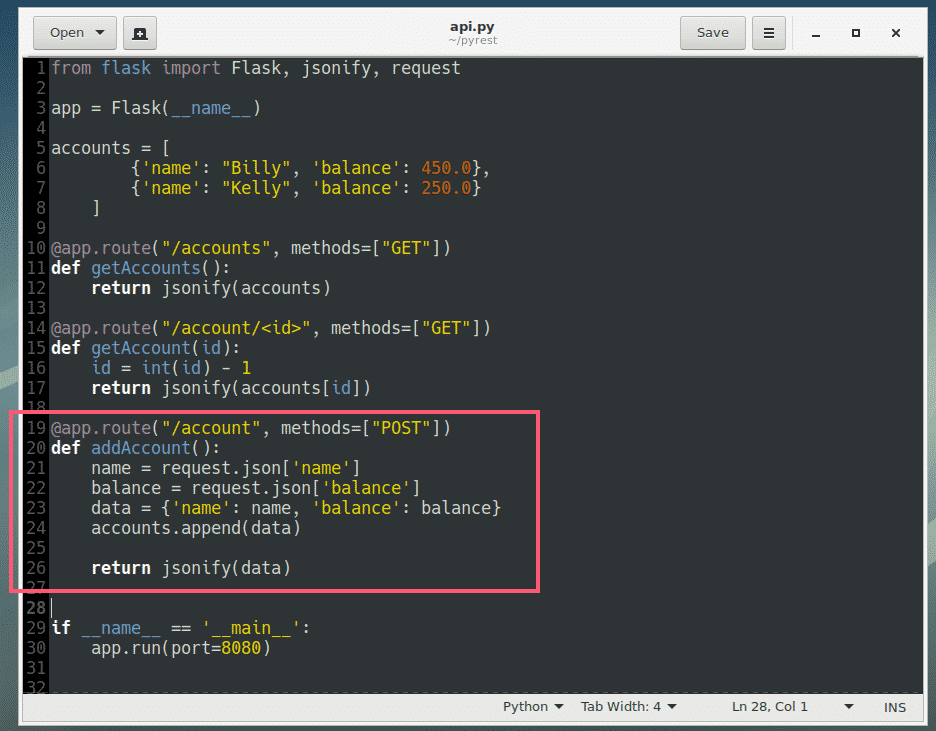 To insert new data into the /account endpoint, run the following command:

The data should be inserted.

As you can see, the new data is added.