Renaming a filename is a very common task for any operating system. Anyone can easily rename a file by using the graphical user interface (GUI). You can also rename a file by using a command in bash script. Many commands exist in Linux to rename a filename. The command ‘mv’ is the most popular command for renaming a file. There is another command called ‘rename’ that can also be used for the same task. However, this command is not installed on Ubuntu by default, so you will have to install this command to rename a file. This article explains how to use these two commands in bash to rename filenames.

Rename a File with ‘mv’ Command

The most commonly used command in Linux to rename a filename is the ‘mv’ command. The syntax of this command is given below.

Using any option with the ‘mv’ command is optional. To rename a file, you must type the original filename after the renamed filename with this command. Various uses of the ‘mv’ command are explained in the next section of this article.

Example 1: Rename a File with ‘mv’ Command without Options

# Check the original file exists or not
if [ -f $original ]; then
# Rename the file
$(mv $original $rename)
echo "The file is renamed."
fi 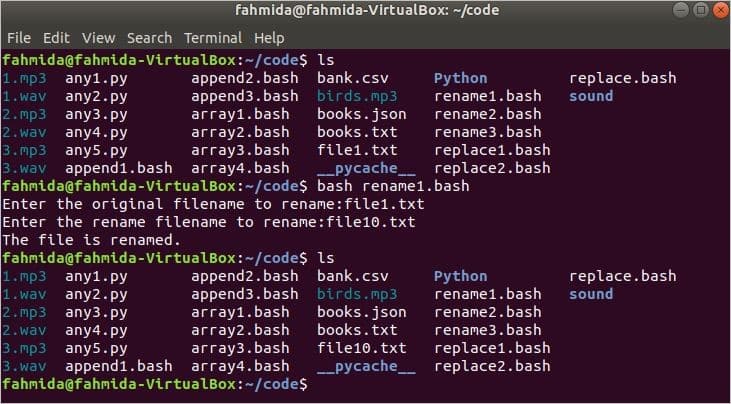 Example 2: Rename a File with ‘mv’ Command Using -i option

The problem of the above example can be solved by using the ‘-i’ option with the ‘mv’ command.  The following script will ask for permission from the user to overwrite before doing the renaming task. If the user press ‘n’ then the rename task will not be done. 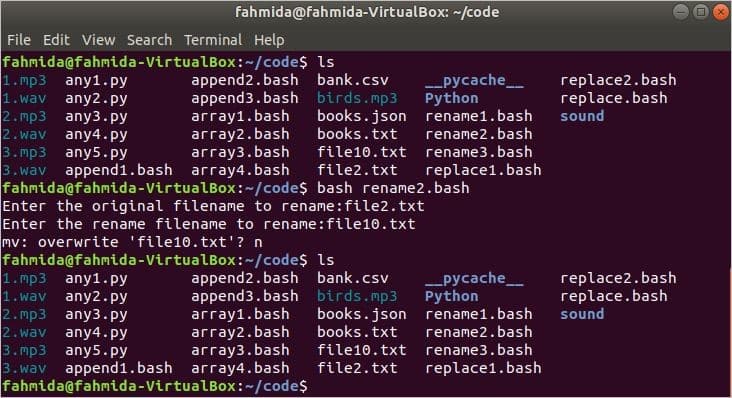 Rename a File with ‘rename’ Command

The ‘rename’ method is used for advanced file renaming tasks. Run the following command in the terminal to install the ‘rename’ command.

The syntax of this command is given below.

This command can be used with and without options, like the ‘mv‘ command. Multiple files can be renamed at once by using a regular expression. Here, the ‘s’ indicates substitution. If the search text is found, then the files will be renamed by the replacement text.

# Rename all files that match with the pattern
$(rename "s/.$search/.$replace/" *)
echo "The files are renamed." 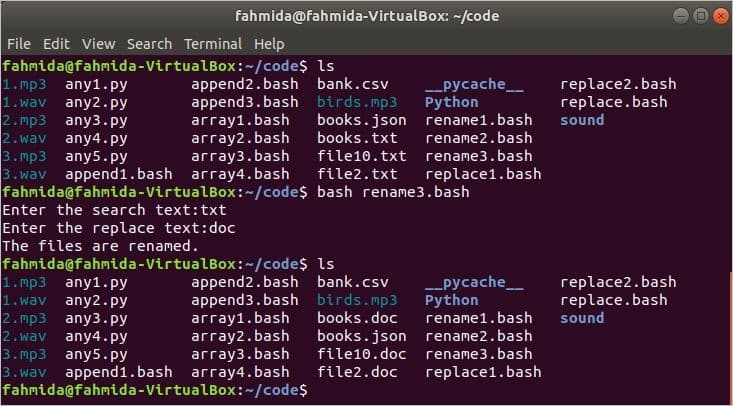 This article used a number of examples to illustrate the use of the ‘mv’ and ‘rename’ bash commands. Renaming a filename should be easier for bash users after practicing the above examples.