The Postgres database management system includes both object-oriented and relational characteristics and therefore is an object-oriented relational database system. It does support several distinctive features like user defined data types, views, rules, and many more that make Postgres an advanced level DBMS. Like other DBMSs, the primary components of its database are tables and columns. This article provides a procedural guide to rename an existing table of a Postgres database.

If you are heading towards an operation on a table in Postgres databases, then the following instances are required in this regard.

– Postgres database and a few tables

– (Optional): There must be some columns inside the table to verify that the content inside tables remains the same after renaming the table.

How to rename a table in Postgres

The table-name refers to the name of the table you want to change, and the new-table-name indicates the new table name that you want to set.

As we progress through the examples, we will implement the ALTER TABLE statement to rename tables in Postgres. Firstly, connect to the database where the table resides. We are now connected to linuxhint database and to check the available tables we have executed the following command. The output shows there are two tables in our linuxhint database.

Referring to the output shown above, let’s say we want to rename the table named employee to employees_data. Before renaming the table, we will check the content of the employee table so that it can be compared after renaming the table. To do so, use the command provided below: 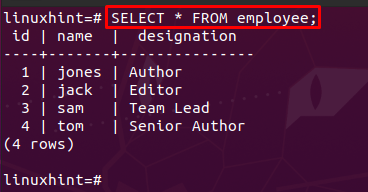 After getting the content, we move on to renaming the employee table.

After that, you can verify the content of table empolyees_data by using the command stated below, and the content is the same as it was in the old table. Hence, it is concluded that the rename table does not manipulate the data inside a table.

Moreover, if we execute the same command with IF EXISTS option then instead of reporting an error, it will initiate a NOTICE that the required relation does not exist.

Postgres is a widely used open-source database management system that is well known for its scalability, security, reliability, and stability. This article demonstrates the way to rename the table in Postgres. For that, Postgres supports the ALTER TABLE command with the RENAME option. It is observed that the ALTER TABLE updates the table’s name and all the dependencies associated with that table are also updated. Moreover, it does not allow you to change the names of multiple tables at once. For this, you must run the command separately for each table.