PPA repositories are unofficial repositories that provide a way to add third-party applications to the Ubuntu OS. With PPAs, you can install any software that is missing from your system’s default repositories. Installing and removing a package via its PPA is very simple. All you need is to add the PPA repository and then you can simply install/remove the package in the same way that you install/remove a standard package. But how do you remove those PPAs that were used to install the packages? There are multiple ways to remove the PPAs added to your system.

In this article, we will explain how to remove PPA from your Ubuntu system using both the GUI and the command line. We have explained the procedure mentioned in this article on the Ubuntu 20.04 system.


To see which PPA repositories are available on your system, simply run the following command in Terminal:
$ apt policy

An alternative way to see the repositories available on your system is by listing the /etc/apt/sources.list.d directory like this:

In the following method, we will see how to remove the PPA by using the Software & Updates utility in the Ubuntu system.

Launch the Software & Updates utility by searching it through the Activities search bar.

In the Software & Updates utility, go to Other Software tab. Here you will see a list of PPA repositories available on your system. Select the PPA that you want to remove and click the Remove button.

The system will then ask for authentication. Enter the password and click the Authenticate button, after which the selected PPA will be removed from your system. 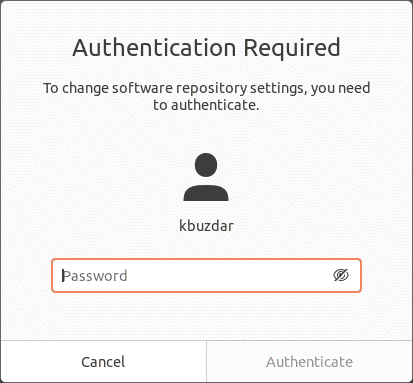 This command will remove the PPA for the Y PPA Manager from the system.

The /etc/apt/sources.list.d directory contains the repositories available in your system in the form of separate files.

To remove a PPA from this directory, simply use the rm command followed by the PPA file name like this:

It will remove the skype PPA from the /etc/apt/sources.list.d directory.

The PPA purge utility is not installed by default on Ubuntu. You can install it with the following command in Terminal:

Once installed, use the ppa-purge command to purge any PPA from your system. Here is the syntax to do so:

This command will remove the PPA as well as the application installed from this PPA. 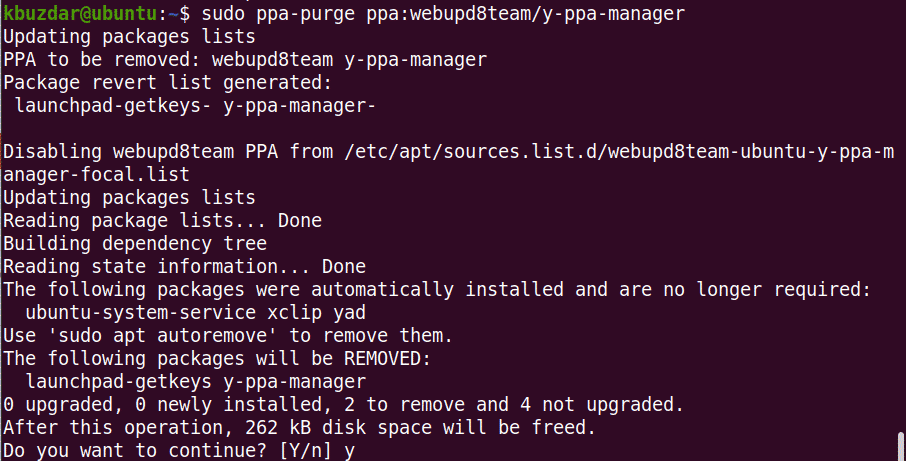 When you run the above command, the system might ask for confirmation by providing a Y/n option. Hit y to continue, after which the removal process will be started on your system.