Sometimes, there is a need to manage a massive volume of text data in fields like computational linguistics, machine learning, and data analysis. So, in C++, strings and lists are commonly used for this. Perhaps, we need to remove the initial appearances of a character from a string or a list of characters. Throughout this article, we’ll look at alternative methods for removing the first instances of a character from a string in C++. The function removes the first character of the string’s content, resulting in a shorter string.

Example 1: Remove the First Character From the String Using erase() Method in C++

The string::erase function is the recommended method for removing characters from a string in place. Scope overload is demonstrated in the following C++ program:

The following output shows the working of the erasing method over a specified string. As you can see, the string’s initial character has been erased:

Example 2: Remove the First Character From the String Using the Iterator Method in C++

The shell has displayed the output, which shows the string before the erase iterator method and after the first character is removed from the string.

Example 3: Check the Empty String To Remove the First Character From the String in C++

Before using the string::erase function, ensure there isn’t an empty string. If the input sequence is empty, the program throws a std::length error exception. 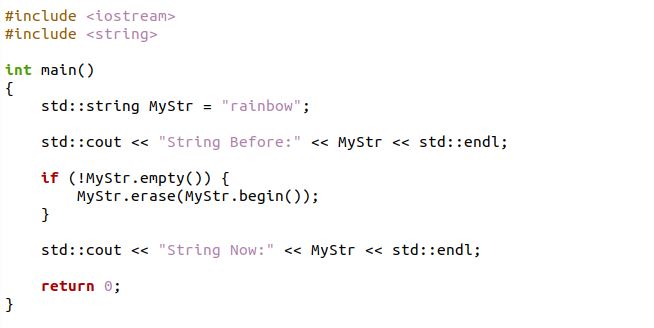 We have got the following output strings.

Example 4: Remove the First Character With the Matching Character in C++

Now, we have an example to remove the initial character if it corresponds to a specific character, using the following syntax: 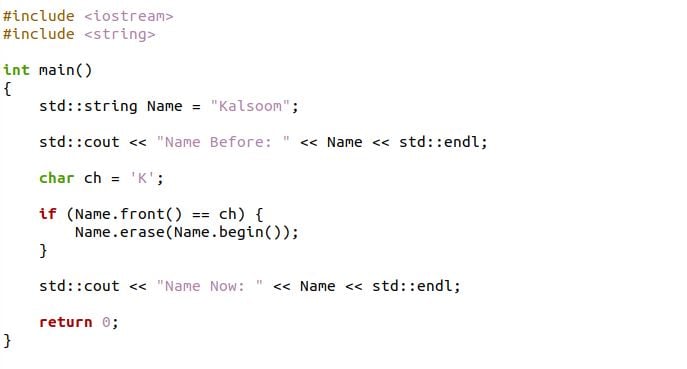 As you can see, the first character removed from the string is as follows:

Example 5: Remove the First Character From the String Using the substr() Method in C++

We have used the substr function over the string “MyString” in the if condition block. The substr function has passed with the first character position and the length of the string to -1. It returns a newly formed string from the caller string object that contains the specified characters. 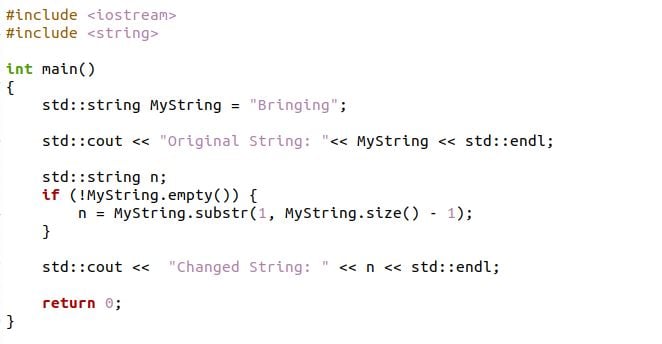 The substr method removed the first occurrence of the character from the string, as shown in the following shell: