Iterate Over the Members of a Sorted Set

As you all know, Redis sorted sets are derived from the regular sets where each member is ordered by its score value in ascending order. If two or more members hold the same score value, they are ordered by lexicographical order. Usually, the members and scores can be directly retrieved using the ZRANGE command. When you have a big sorted set with thousands of members, the ZRANGE command might block the server for a long time like the SMEMBERS and KEYS commands which is a drawback. So, Redis offers a special command called ZSCAN which is derived from the SCAN command to iterate over the members of a sorted set. Since the ZSCAN command inherits from the SCAN command, almost all the behaviors are the same as the general purpose SCAN command. 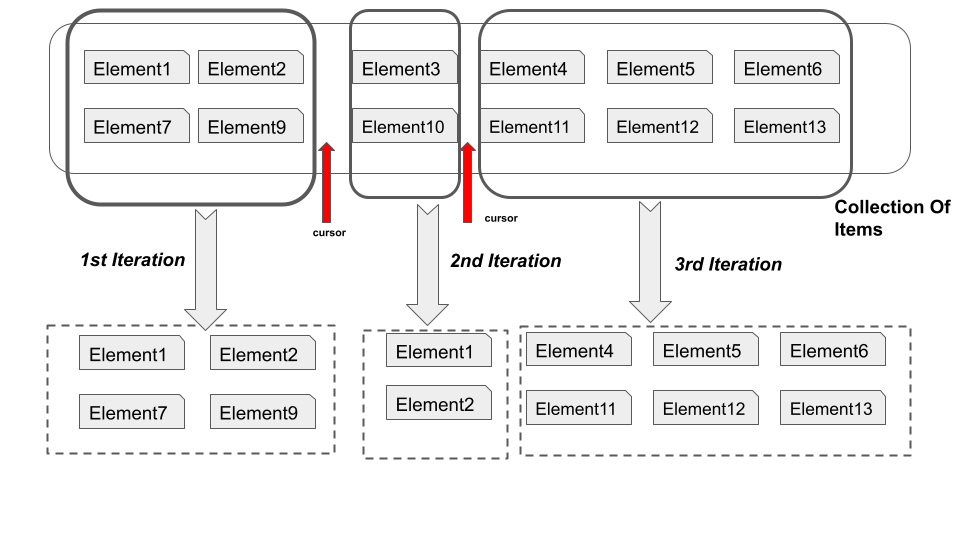 As in the given figure, the SCAN command is a cursor-based iterator. Hence, it takes one or more iterations to provide all the items of a Redis collection. Since the ZSCAN command inherits from the parent SCAN command, the behavior is the same. In this guide, the syntax and use cases of the ZSCAN command will be discussed in detail.

The ZSCAN command is a cursor-based iterator that starts the iteration with the 0th cursor. Afterward, in each iteration, it returns zero or more sorted set members along with the next cursor that should be used as the cursor for the following command call. If the returned cursor is 0 after one or more iterations, it means that the scanning process is over. All the sorted set members are returned at this point. This process is called a full iteration. As you could see, the ZSCAN command keeps its state only using a cursor which leads to a limited state awareness. Therefore, the following drawbacks are associated with the ZSCAN command.

In addition, there is no guarantee on the count of the returned members. In some cases, if the sorted set is very small, all the members might be returned in the very first iteration. Because Redis uses a special single allocation packed encoding format to hold the members until a maximum item count is reached. The ZSCAN command is only able to return a cursor if the scanned data structure is represented as a hash table.

Syntax:
The ZSCAN command uses almost the same syntax as the SCAN command except that it accepts a sorted set key as the first argument. The command syntax with the allowed arguments is as follows:

sorted_set_key: The key of the sorted set.
Cursor: The cursor value starts from 0 and ends at 0 if it is a full iteration.

The following arguments are optional:

The returned result set per iteration contains a couple of elements. The first part is a 64-bit unsigned integer that represents the cursor to be passed into the next call. The next part is an array of members and associated scores. 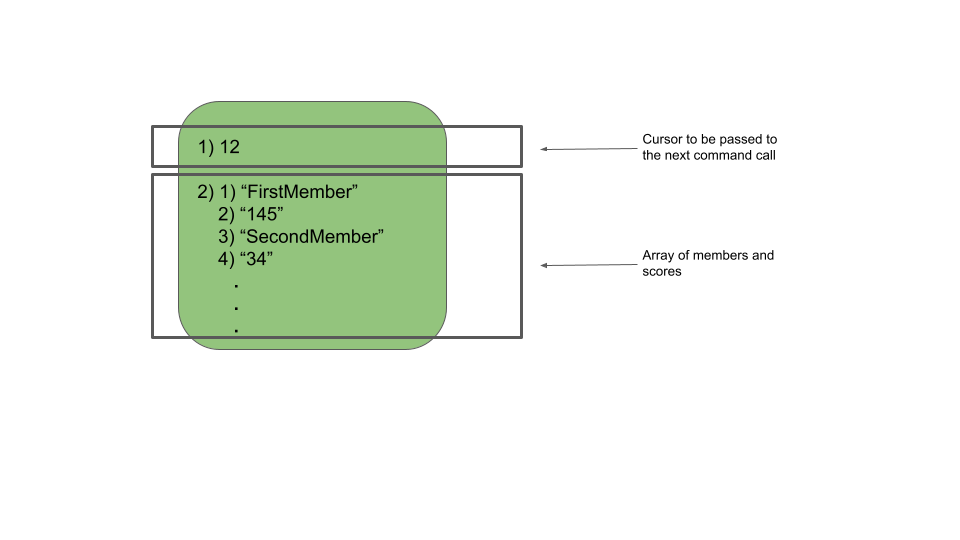 Let’s assume that an online game company maintains a leaderboard using the Redis sorted set. Since massive users are actively playing the game, they need a way to retrieve each player and their associated score which is the number of completed missions. It is a must to perform the retrieval without blocking the server. So, the recommendation is to use the ZSCAN command as follows:

First, we create a sorted set with some players and the completed number of missions.

Now, we can iterate over the members of the sorted set as follows:

The cursor value is 0 in the returned result set which means that all the members are returned at the end of the first iteration. In this case, because the number of members is small, Redis represents these members using a single-allocation packed encoding. Therefore, until a maximum pack size or member count is reached, the command returns all the members in the sorted set. This is called a full iteration. Because at the end of the first iteration, we receive all ten members and their scores. If we have hundreds of members, it is represented as a hash table in memory. So, it takes several iterations to return all the members.

The ZSCAN command can be used to filter out the returned members based on a pattern match. In that case, the MATCH argument has to be specified.

Let’s use the same example from the previous use case. The requirement is to fetch the players whose name starts with the letter “J”. It is just to implement the next cool feature related to the game. The MATCH argument can be specified as follows:

This should ideally return two members whose names are Jeremy and John.