Redis sorted sets can hold a collection of strings where each is called a set member. Each member is associated with a rank and score value. Rank is the index of a particular member in the sorted set stored at a given key. The score value is used to order the set members from the lowest to highest score value. Hence, a member with the lowest score value will be assigned to an index of 0. These properties allow sorted sets to do a lot more tasks with high performance. 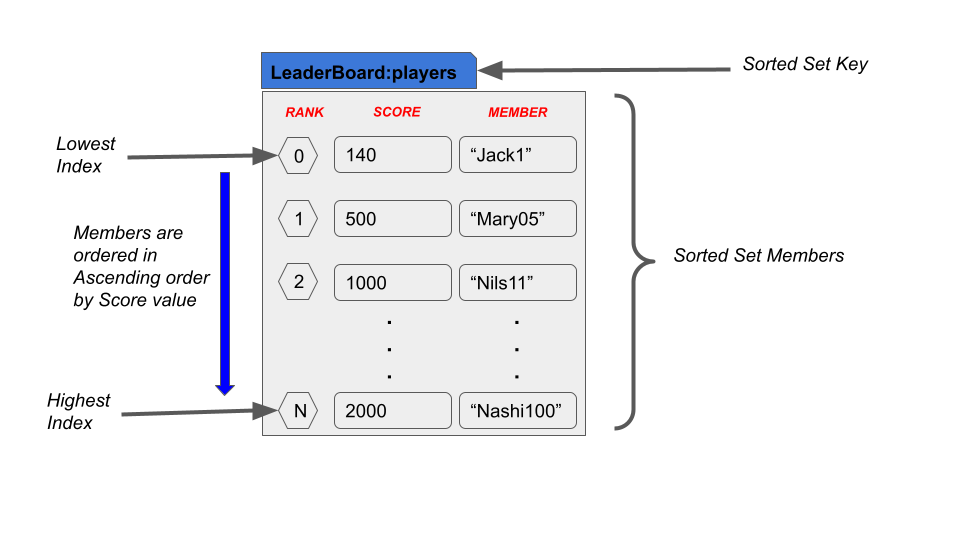 Various commands are available to operate on sorted sets. Sometimes, you need to know the index or rank of a member in the Redis sorted set stored at a given key. The ZRANK is the ideal command to use, which will be discussed in the following section.

Now, you have an idea of how the index value has been assigned to each member in a sorted set. The ZRANK command obtains the rank of a specified member with linear time complexity. The following is the syntax for the ZRANK command:

sorted_set_key: The key of the sorted set to which the member belongs.

member: The name of the member you need to obtain the rank.

Case 01: Get the Game Leaderboard Position of a Player

Let’s assume that we got an online game leaderboard implemented using the Redis sorted set. Now, we will display each player’s rank when they log into their user profile.

First, let’s create a dummy leaderboard, OnlineGameLeaderboard, and add players to it using the ZADD command.

Next, we will call the ZRANGE command to check whether the members have been added correctly.

As expected, the members have been sorted in ascending order by their score values. Let’s say we need to obtain each of these members’ ranks. The ZRANK can be used as the following:

As expected, the rank returned for each member where the member “rikaz” has the lowest rank of 0. In addition, the member “noel” got the highest rank of 3.

Let’s check how the command behaves if you specify a non-existing member in the following command:

The member whom we have specified is not in the sorted set. Hence, it returned the string nil.

Next, we will check the following command for the non-existing key:

The return value is again nil.

In short, Redis sorted sets can hold string values called members. Each of these members is associated with two properties: score and rank. As discussed, the rank is based on 0 and incremented by one per member. Usually, the Redis sorted set members are ordered by their scores in ascending order. Hence, the member with the lowest score will be assigned to the 0th index.

This article discussed how the ZRANK command allows you to obtain this index value for a given member in the sorted set stored at a given key. It is important to note that the ZRANK command operates with linear time complexity.