Redis sorted sets contain unique, non-repeating string type members in an ordered manner. By default, the sorted set members are ordered in ascending order by their score values. In addition, sorted sets maintain a zero-based index where members are ranked as 0, 1,…, and so on. Whenever the scores are similar among two or more members, the ordering will be done by lexicographical order. Since the sorted set elements are already ordered, members can be queried by rank or score in a fast way. Furthermore, Redis sorted sets are built on a dual-ported data structure which allows add, read, remove, and update operations execute in O(log(N)) time complexity. 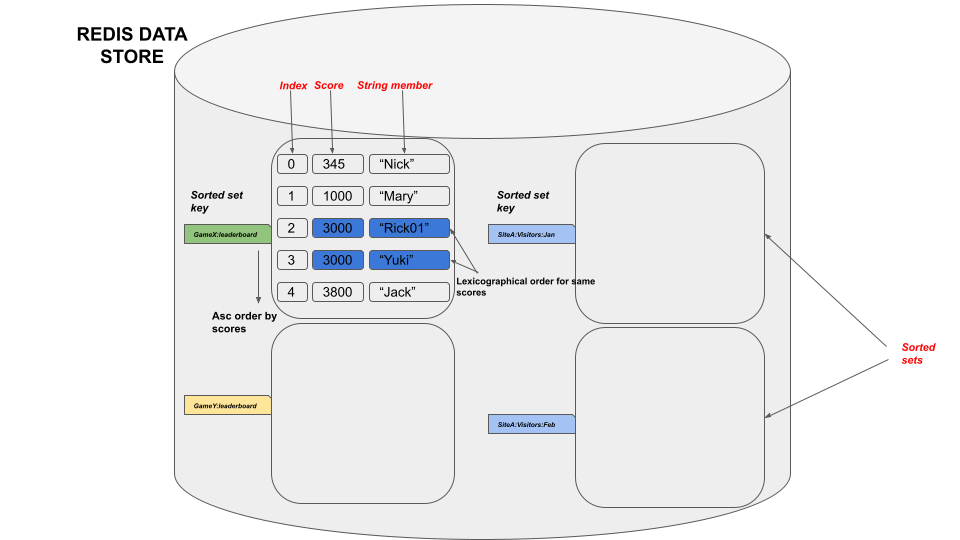 In this guide, we will be focusing on the ZRANGE command, which can be used to query a range of members by their scores, indexes, or lexicographically.

The above arguments are mandatory for this command, and some optional arguments can be specified as follows.

Let’s assume an online game where each user is rewarded with experience points based on the number of completed missions. The Redis sorted set data structure is an ideal candidate to hold this information, as shown in the following.

As you can see, the game experience points have been stored as the score of each member.

Let’s inspect the newly created sorted set stored at key ‘onlinegameusers’. Since the default range query is based on indexes, we will be specifying the minimum and maximum bounds as 0 and 5.

As discussed earlier, the sorted sets have zero-based indexes. Hence, the first three elements can be specified as an index range starting from 0 to 2. The output should display the top 3 elements with the lowest scores as follows.

In this scenario, we need to query all the users who have more than 1000 experience points. Since we are talking about a score-based range, let’s use the BYSCORE optional argument to specify the range in score values.

The range boundaries have been specified using scores. Since we need scores of more than 3000, the score of 3000 has to be excluded. The ZRANGE command supports excluding scores by prefixing it with the ‘(’ character.

As expected, we have only one member whose experience point(score) is more than 3000.

Use Case 03: Getting the Top 3 Users Whose Having the Highest Experience Points

By default, the sorted set orders its elements in ascending order. Hence, the member with the lowest score is positioned at the 0th index. To get the top 3 users with the highest scores, we have to pass the REV argument to the ZRANGE command as follows. It will order the sorted set in descending order and query the index range starting from 0 to 2.

The ZRANGE command allows you to retrieve a range of members based on lexicographical values if the scores are similar among the members. Let’s reset all the scores to 0 as follows.

As expected, the experience points(scores) have been reset to 0 as shown in the following.

Let’s use the BYLEX argument to retrieve members whose names start with the letter ‘L’ or the following letter.

The range boundaries have been specified using string values (lexicographical). The output should be all the members whose names start with the letter ‘L’ or the following letter. Ideally, “Niku”, “Rihana”, and “Dickson” should be the output. The lowercase letter “d” comes after the uppercase “L” according to their ASCII values.

In summary, the ZRANGE command is used to fetch a range of members stored in a sorted set stored at a given key. As mentioned, this command allows you to query a range of set elements by their scores, ranks, or lexicographical values. Also, the ZRANGE command can be used with the REV argument to reverse the sort order. Overall, several capabilities are packed into this command, and it has become a replacement for several commands such as ZRANGEBYLEX, ZRANGEBYSCORE, etc.