A set is a collection of elements such as numbers, letters, or real-world objects. Each of these members is distinct or unique for a given set. They alone can’t do many things. Hence, there are requirements to make the relationships among two or more sets to generate meaningful insights. As we all know, numbers have fundamental operations such as addition, subtraction, multiplication, and division. In the same way, sets come with four main operations: union, intersection, difference, and complement. 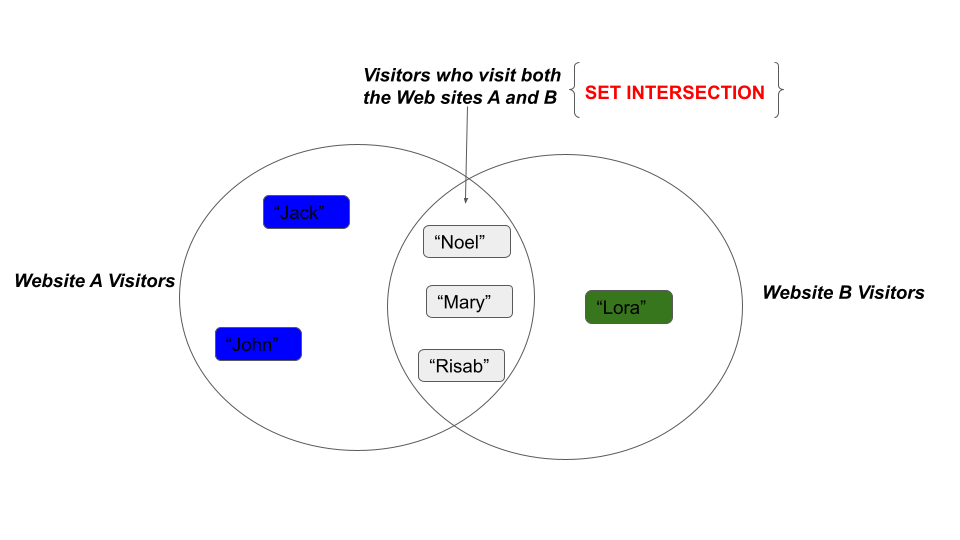 Since, the Redis sorted set elements are associated with score values, each of these scores is summed per common element and stored in the destination set as shown in the following illustration: 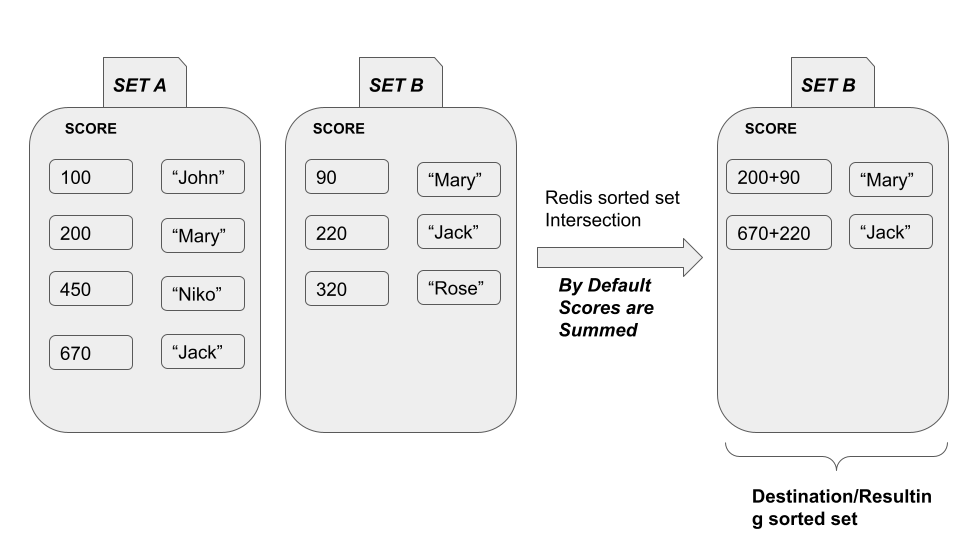 The following is the basic syntax of the ZINTERSTORE command:

destination_set: The key of the sorted set that holds the intersection of the specified sorted sets.

number_of_sets: The number of sorted sets that the set intersection is computed against.

set_key: The key or unique identifier of the sorted set.

WEIGHTS: The multiplication factor for each element’s score in the source sets.

AGGREGATE: This option specifies a way to aggregate the resulting scores per element in the intersection.

Both the WEIGHTS and AGGREGATE arguments are optional to the ZINTERSTORE command.

The ZINTERSTORE command returns an integer value which is the number of members in the destination sorted set at destination_set.

Let’s assume a scenario where we got two websites A and B. To get an overall picture of the site visitors, we need to query the users who are visiting both A and B sites. Furthermore, we have a requirement to count the number of visits by each member.

Let’s create two sets, setA and setB, as shown in the following:

In this example, we used the commonsitevisitors as the key of the destination sorted set. It is mandatory to specify the number of sets that we use to compute the intersection. In this case, it is 2.

The returned value is 2 which means that the two members should be stored in the destination sorted set. Let’s inspect the resulting sorted set commonsitevisitors using the ZRANGEBYSCORE command:

As expected, the “Nick” and “Mary” members are in the resulting sorted set with the summed score values. In this example, the member “Nick” has 300 and 100 scores in setA and setB, respectively. Hence, the intersection of these two sets has summed the relevant score values for “Nick”. The same has happened with the member “Mary”.

Let’s use the multiplication factor 2 and 3 for setA and setB, respectively:

The score of “Nick” is calculated by multiplying 300 and 100 by 2 and 3, respectively and summing the results. Hence, the final score should be 900. The same procedure is followed by the ZINTERSTORE command for the other member as well.

By default, the scores are aggregated by summing them, but the other options are also available. We can use the MIN and MAX arguments that keeps the minimum or maximum score per member in the resulting sorted set.

As expected, the maximum score value for both members is 300 and it is kept in the destination sorted set.