The set difference is one of the fundamental set operations that has always been on the list along with the other two set operations union and intersection. Furthermore, the difference between a given two sets produces another set. Consider the two sets A and B in the following illustration:

The set difference A-B can be written as follows:

It doesn’t need to be that A-B and B-A to be the same. Let’s consider the set difference B-A:

The set difference can be visualized using a Venn diagram in a simpler manner as follows: 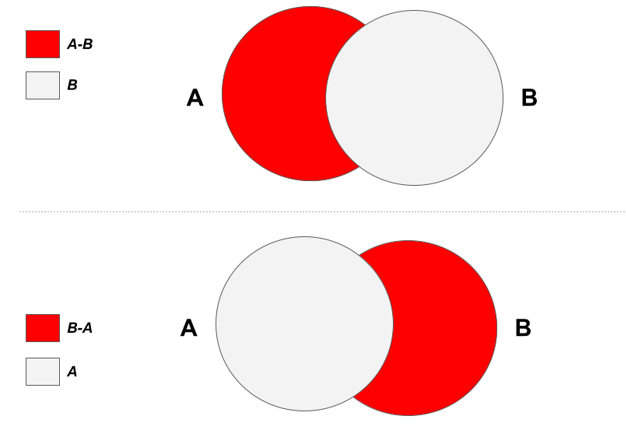 ZDIFF command has a simple syntax where it is mandatory to specify the number of keys as the first argument as shown in the following:

number_of_keys: The count of the keys of the specified sorted sets.

key: A key of the specified sorted set.

WITHSCORES: This is an optional parameter. When this argument is specified, the scores of the returned set elements are displayed.

This command returns a sorted set which is the difference between the provided sorted sets. The element scores are displayed if the WITHSCORES argument is passed.

Use Case 1: Find Users Who Are Vegans

Let’s assume that a restaurant maintains two lists where one lists the people who order vegetables and the other one records the people who order meat. Now, they want to identify the vegans and send a vegetarian meal on their birthday. Redis sorted set data structure can be used in this scenario.

First, we create a set to store the people who ordered vegetable meals.

The score value is used as the average number of meals ordered per month. Next, we create another sorted set called meatconsumers.

Let’s inspect the members of both sorted sets using the ZRANGE command.

As expected, both sets are populated with the specified members previously. Since the restaurant’s management team needs to query the vegans, we should populate the set difference between vegiconsumers and meatconsumers. The following command populates a sorted set that consists of users who only ordered the vegetable meals.

Since we take the set difference between two sets, the first argument is set to 2. Then, we specify the keys of the two sets.

We can modify the previous command to display the score value of the returned member.

As expected, the set difference between the vegiconsumers and meatconsumers produces a sorted set with one member as shown in the following:

Hence, the only vegan customer is “Jack”.

Use Case 2: Find Users Who Are Non-Vegans

Similarly, the restaurant management can query the non-vegan customers. In that case, the set difference should be as follows:

Let’s use the ZDIFF command with slight modification this time.

As expected, the member “Henry” is the only customer who only ordered meals with meat without ordering any vegetable meal.

In short, Redis supports the fundamental set theory operations such as set union, intersection, and difference on the sorted set data type. The ZDIFF command is used to produce the difference between a given two sets. As mentioned, this command returns another sorted set which consists of the members that only belong to the first sorted set specified. As shown in the previous use cases, it is mandatory to specify the number of keys as the first argument to this command. Overall, the ZDIFF command almost has logarithmic time complexity that can be used efficiently in low latency applications.