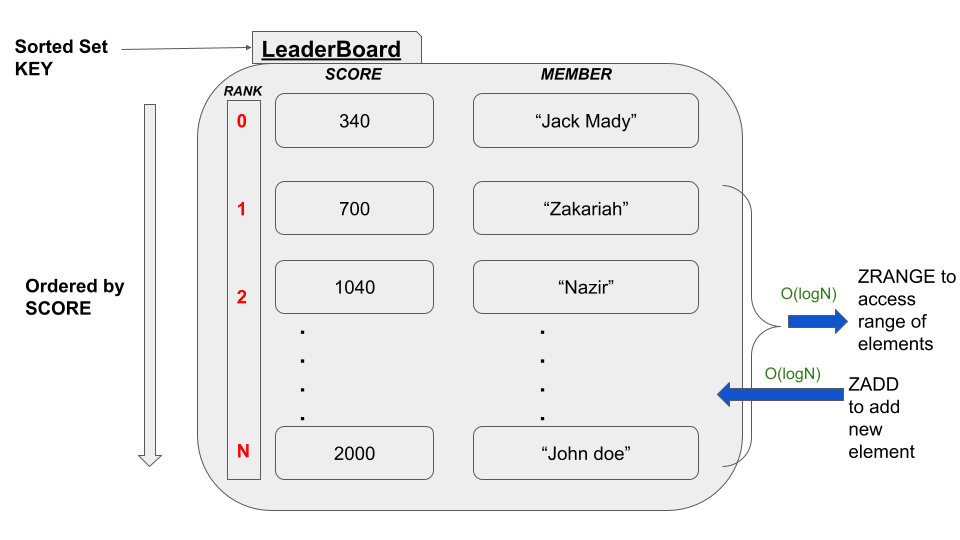 As shown in the previous illustration, most of the major commands that operate on Redis sets have the time complexity of O(log(N)) which is faster.

The ZCOUNT command is used to query a range of set elements between the specified scores. The returned elements are sorted from the lowest to the highest score. Whenever the multiple elements hold the same scores, those are ordered by lexicographical order. This command also has the O(log(N)) time complexity because it uses the rank property when querying a range of elements. Hence, no linear relationship to the number of elements when measuring the execution time.

The following is the syntax of the ZCOUNT command:

set_key: The key of the Redis sorted set.

minimum_score: The lowest score value of the range specified.

maximum_score: The highest score value of the range specified.

The min and max ends of the range can be specified in different ways. Whenever you have no clue about the lowest and highest possible scores in the sorted set, the -inf and +inf can be used. It ideally fetches all the elements in the sorted set.

In addition, the specified minimum and maximum values are inclusive of the range. If you want any of these values to be exclusive, the “(“ character can be used as in the ZRANGEBYSCORE command. 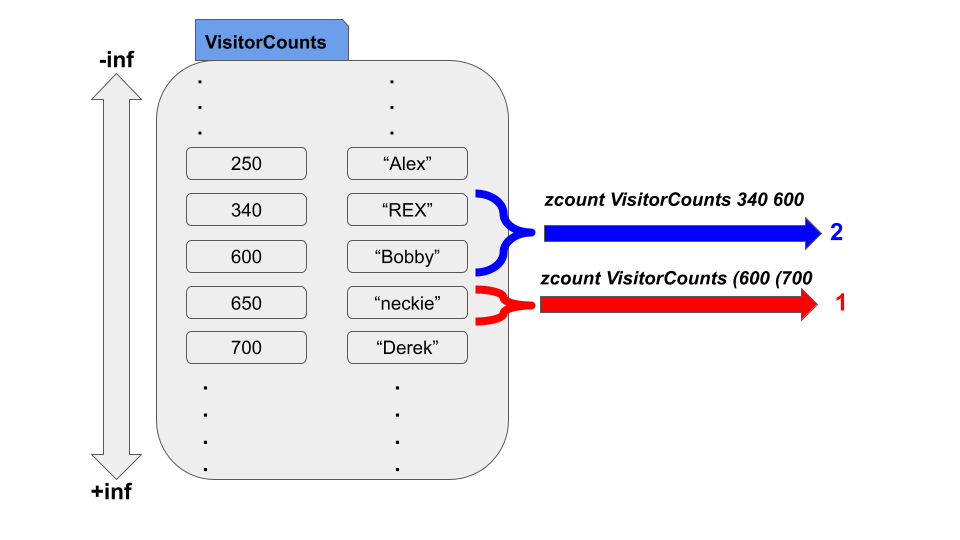 This command returns an integer value which is the number of elements in the specified range.

Redis sorted set data structure is an ideal candidate for storing the leaderboard data. Let’s assume a scenario where an online game offers an amount of gold for its players when the missions are completed. Based on each player’s gold amount, a leaderboard needs to be implemented. We can easily use the Redis sorted sets to implement such leaderboard. The gold amount can be mapped as the score of each member.

Let’s create a sorted set GameLeaderBoard and add some players with gold amounts as shown in the following. The ZADD command is used to create and add players to the sorted set stored at the key GameLeaderBoard:

Let’s use the ZRANGEBYSCORE command to check whether the members are added and sorted properly.

As expected, the members are stored and sorted by scores. Since “Rexy” and “Rakesh” got the same scores, they are ordered lexicographically with “Rakesh” being the top member of the returned list.

Let’s count the number of elements in the sorted set using the ZCOUNT command:

Since we got five set members, the returned value is 5 because the range is from the -infinity to +infinity which covers the whole set.

Let’s first inspect our set with the ZRANGEBYSCORE command as shown in the following:

Let’s use the “(“ character to exclude the 1000 and 3000 scores with the same example shown in the previous example:

Whenever you need to count the members between a range of scores, it is recommended to use the ZCOUNT command which is immensely faster.

In summary, the ZCOUNT command is used to count the number of elements in a given range of score values. It has an O(log(N)) time complexity. As discussed, it can be used with minimum and maximum values to define a range of scores as in the ZRANGEBYSCORE command. The min and max values are inclusive by default. As shown previously, the “(“ character can be used to exclude the score values. Overall, the ZCOUNT command is simple to use and operates with great performance.