Redis streams store data as a list of entries where each entry consists of key-value pairs. At a low level, these entries are packed into macro-nodes, as shown in the following. 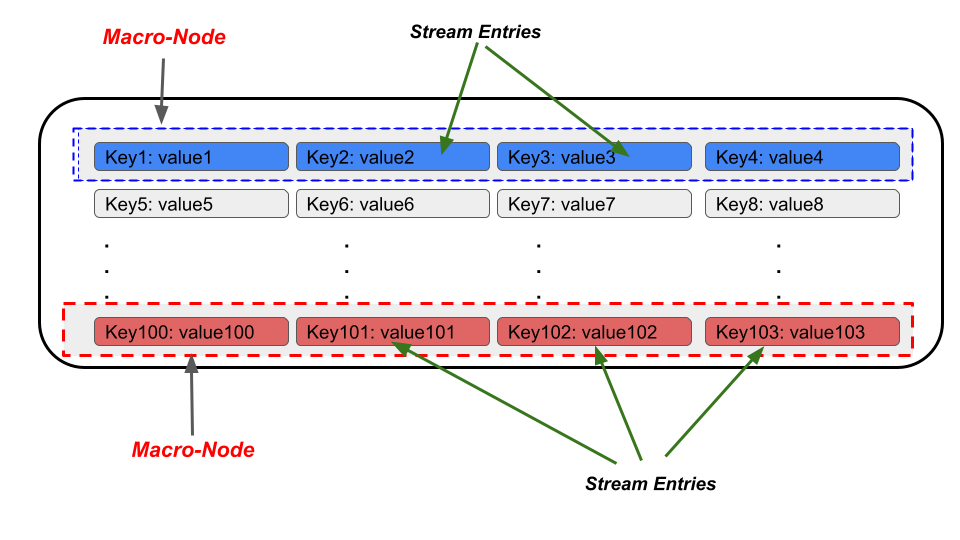 In this article, we are focusing on the removal of stream entries using the XTRIM command, and the above-mentioned concept closely affects the efficiency of the removal operation. Usually, Redis stream entry removal is very efficient if it’s done on the macro-node level but not at the entry level. This mechanism is implemented with the XTRIM command that we will be discussing in the following section.

stream_key: The key of the Redis stream.

MINID: The minimum stream id that should remain after trimming the entries. All the entries will be removed that have IDs lower than the specified threshold. Whenever you specify this parameter, the threshold becomes a stream ID.

= operator: When specified, exact trimming will be performed based on the threshold value.

~ operator: When specified, nearly exact trimming will be performed based on the threshold value and macro-node size.

LIMIT count: The maximum number of entries to be removed.

Use Case 01 – Removing Stream Entries Based on Maximum Length

Let’s assume that a tourism company maintains a Redis store to keep track of tourist information. The Redis streams data structure has been used to store each tourist’s information as key-value pairs. With time, the stream has grown, and they are planning to keep only the latest 1000 entries. So they have identified the maximum length of the stream should be 1000 at any time. The XTRIM command has been used to achieve this.

For demonstration purposes, first, we will create a stream with 10 entries as follows. The XADD command has been used to perform the insertion.

Let’s use the XRANGE command to inspect the stream touristinfo as follows. 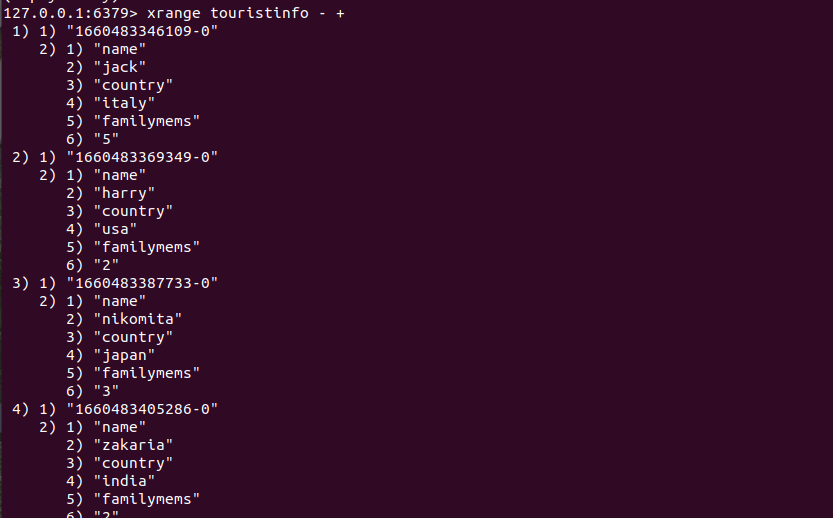 As expected, the 10 stream entries have been displayed by this command.

For demonstration purposes, we will be trimming the stream where its maximum length would be 5.

Let’s inspect the stream entries again with the XRANGE command. 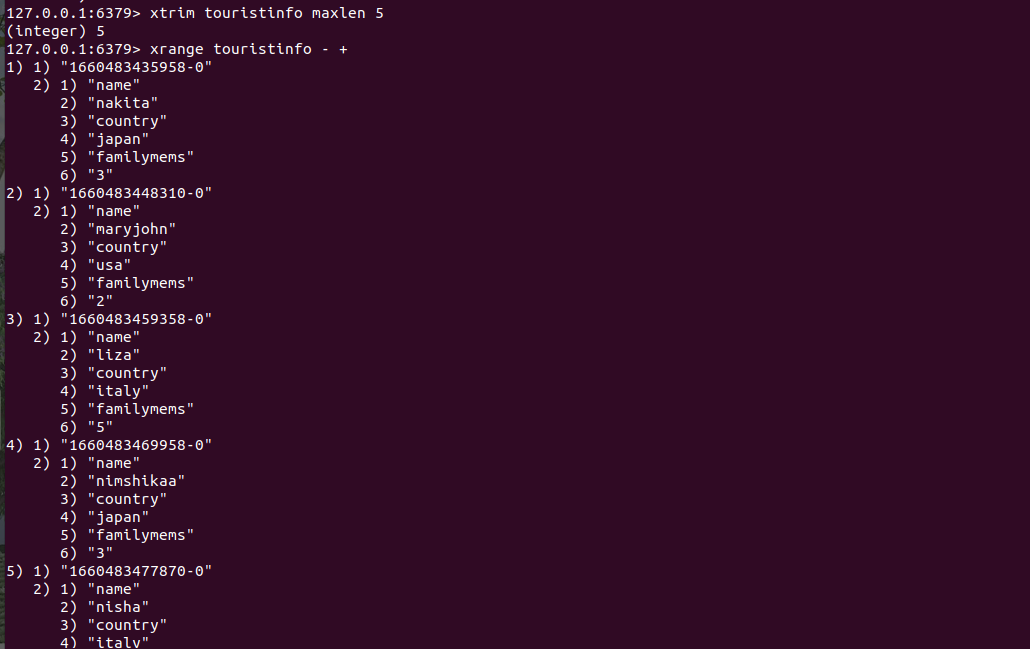 As expected, five entries have been evicted from the stream, and its length is 5.

Use Case 02 – Removing Stream Entries Based on Stream IDs

Let’s take an example where a weather company keeps track of weather information of a given location using Redis streams. Now, they want to delete older entries that are no longer needed. We can use the XTRIM command using the MINID strategy, as shown in the following.

First, we will be creating a stream called weatherinfo and add 5 entries to it as follows. 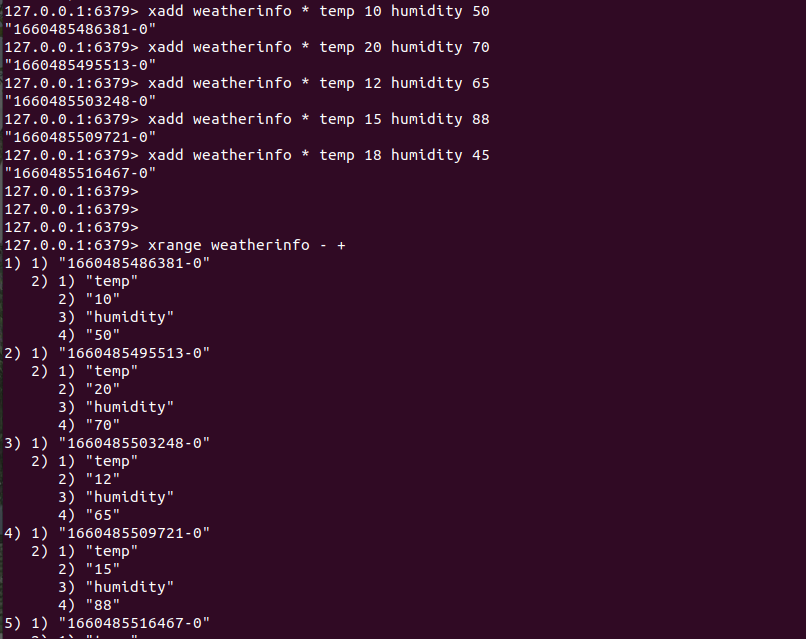 Let’s use the XTRIM command to remove the entries that have IDs lower than the specified threshold value. 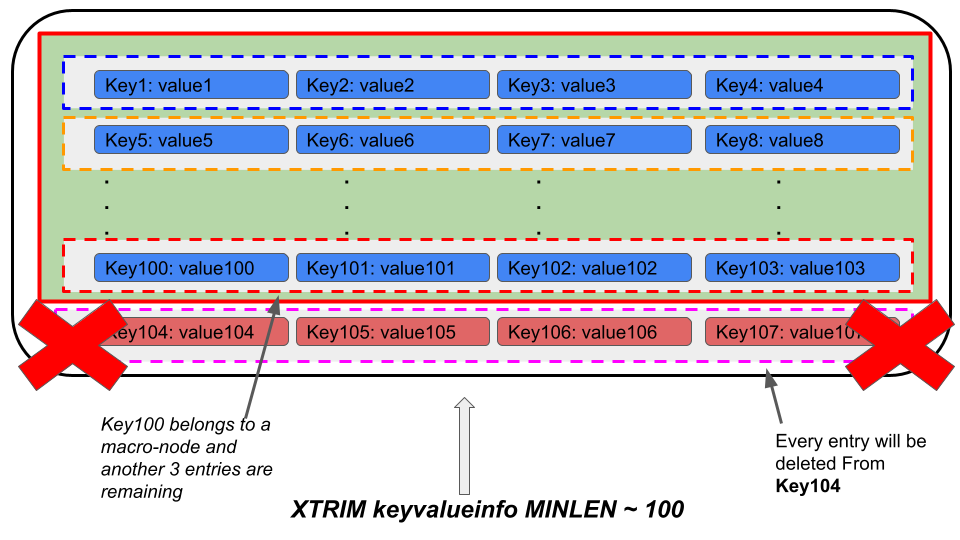 As shown in the above figure, the XTRIM command has been used with the ~ operator. We ask the command to remove all the entries that exceed the length of 100. Since we do not force the XTRIM command to do an exact trimming, it will focus on the efficiency of the trimming operation. So, it will not remove the immediate entries which belong to the same macro-node. It will keep the next three entries that are in the same macro-node and will remove all the macro-nodes after those. It gives a considerable amount of performance improvement than in the exact trimming approach, which forces the command to put in the extra effort. The same procedure takes place when the threshold is based on the entry ids.

The LIMIT argument limits the number of evicted entries from the specified stream, which can be used to gain a bit more performance improvement.

In short, the XTRIM command is used to remove stream entries based on a threshold value. The type of the threshold value can be changed with the context which is being specified using the MAXLEN and MINID command arguments. As discussed, the trimming can be done in two ways where the trimming operation will consider the threshold as an exact or approximate limit. By default, the command uses the = operator that is used for exact trimming. With the ~ operator, you can do an approximate trimming as mentioned in the above section. Overall, the approximate trimming approach and the LIMIT argument help you to gain a considerable performance gain with the XTRIM command.