Redis streams have been introduced from version 5.0 which represents a traditional append-only log data structure. Redis streams are more advanced than a usual log where it supports consumer groups and faster access to the stream elements.

Streams enable the same stream to be consumed by different consumers using the XREAD command. With this, the same messages will be sent to multiple clients. In some cases, we need to push a different subset of messages from the same stream to multiple consumers. The consumer groups concept has been implemented with Redis streams to support this as in the following illustration. 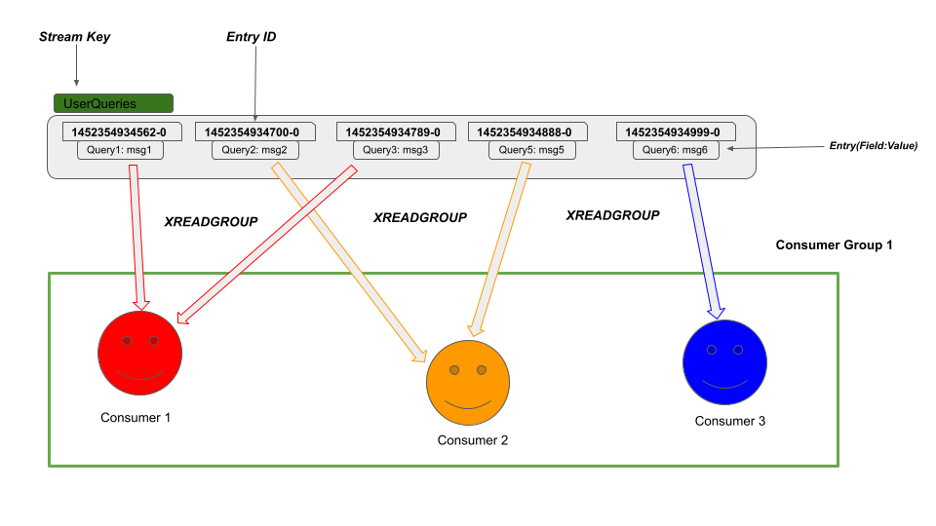 As shown in the above illustration, the three consumers Consumer1, Consumer2, and Consumer3 are consuming different entries from the stream UserQueries. Each of these consumers is part of consumer group 1. Being a member of the ‘Consumer, Group 1’ guarantees the following facts:

<subcommand>: The subcommand name for operations like the creation and deletion of consumers and consumer groups.

<args>: The subcommand arguments if available.

[value]: If an argument takes a value, it can be specified. It is optional and permitted only for certain commands.

The returned result will vary based on the sub-command specified.

The help subcommand returns an array of subcommands with their descriptions.

CREATE
The CREATE subcommand can be used to create a new consumer group for a given stream. The syntax is as follows:

This will create a new consumer group identified by the ‘group_name’ that is associated with the given ‘stream_key’. The ‘MKSTREAM’ option creates a new stream with the length of 0 if the specified stream doesn’t exist in the Redis datastore.

CREATECONSUMER
When you need to create a consumer for a given group, the CREATECONSUMER subcommand can be used. It accepts only the stream key, consumer group name, and a unique consumer name as arguments.

DESTROY
Whenever you need to delete a consumer group with all consumers and pending messages, the DESTROY subcommand can be used. So, it is recommended to use this command with care.

This command will return an integer 0 or 1 which is the count of the deleted consumer groups.

If the last delivered id has been set properly, the command will return a simple string OK.