Redis includes common data types like strings, lists, HashMap, and sets. In addition, it supports more complex data structures like streams. It has been introduced from the Redis version 5.0. The stream type is based on the widely known log data structure. Hence, Redis streams use the append-only technique in their base implementation.

The data in the stream is immutable. The new data can only be appended at the end of the stream. Redis streams can hold entries that are not just strings. Each entry can contain one or multiple field-value pairs like in Redis hashes. Those entries have a unique ID to identify them within the stream, similar to the line numbers or byte offsets used in a log file. The following illustration will provide a better understanding of what the Redis stream looks like: 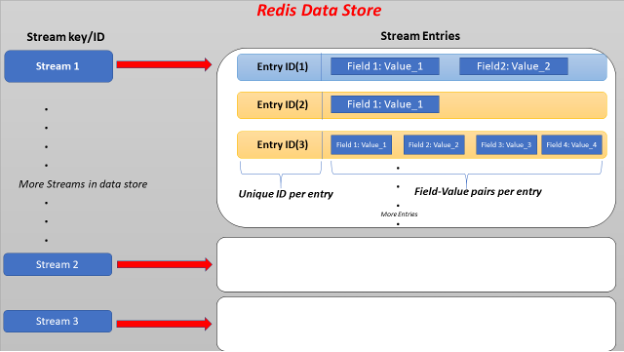 The XADD command is used to add entries to a given stream which is straightforward. The data access mechanism is different with stream types compared to other types. The primary benefit of streams is that they can push the newly appended messages to multiple clients or consumers. It is only one way of looking at Redis streams. Furthermore, we can see it as a time-series store where you can iterate over the whole stream to fetch all the entries for a given time frame.

As mentioned, Redis streams allow multiple consumers to read data from it. In addition, it extends this functionality to a level of accessing a subset of the stream messages by different consumers. Each consumer will catch different data to process, whereas Kafka implements the same behavior with consumer groups. The consumer groups technique is available in Redis streams that allow distributing the given stream data among multiple consumers. 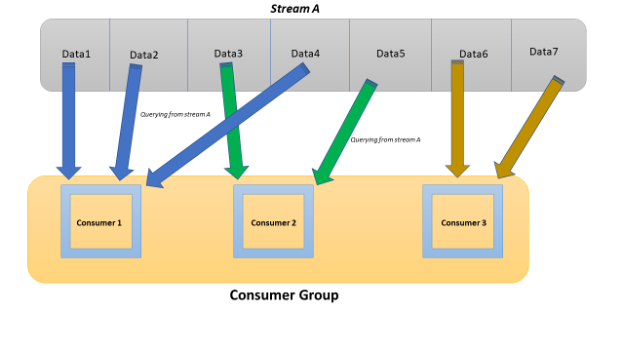 We can use the XREADGROUP command to read data via a consumer group. Each consumer group can contain multiple consumers identified by a unique name.

As previously mentioned, consumers within a consumer group get messages from the stream where the message IDs are greater than the last delivered id. Upon delivering a message to a consumer, its status will be set to pending and stored in a consumer’s group’s pending entries list(PEL). It is a side effect of calling either the XREADGROUP or XCLAIM commands. This would still cause the server to return the pending messages whenever making a call using the XREADGROUP command to fetch the message history per consumer. Hence, Redis consumer groups introduced a message acknowledgment process. The XACK command can notify the server that a fetched message has been successfully processed. It would remove the entry for such a message in the PEL.

The XACK command returns the number of acknowledged entries as a reply.

Let’s look at a real-world scenario where a load balancer reads from a stream of client IP addresses and serves each client from different server nodes. We can think of this as a consumer group reading from a Redis stream where the group contains multiple consumer nodes.

The command is self-explanatory, where the ipaddressStream has a new consumer group called ukServerGroup that provides only the newest messages available to the stream when a consumer is connected. It also creates the ipaddressStream stream because the MKSTREAM parameter has been specified.

Then, we should add several IP addresses to the ipaddressStream created previously using the following Redis XADD command:

Output after each command:

This would add 5 entries to the ipaddressStream stream. Each entry is assigned to a server-generated unique ID that has returned after calling the XADD command.

Here, we are acknowledging both the entries identified by the respective IDs. The command returns the count of the successfully processed messages as well. It is two in this case.

After the previous process, those two messages should have been removed from the pending entries list(PEL). Hence, the server0 consumer will not return any pending messages upon calling the XREADGROUP command via the consumer group ukServerGroup.

It returns an empty array which means no pending messages for this consumer. The message acknowledgment feature is very useful in those types of scenarios.

Redis comes with the stream data type whose underlying implementation is based on the log data structure. Hence, the new entries are appended at the end of the stream. The biggest advantage is multiple consumers can query the latest messages added to the stream. Furthermore, the Redis consumer group technique allows the reading stream by a group of consumers where each consumer sees only a subset of the stream messages. Upon reading a consumer’s entry from the stream, such entry is added to the pending entries list. Hence, the consumer needs to acknowledge each of the pending messages. It will notify the server to remove the entry from PEL and release the memory. The XACK command can be used to acknowledge Redis stream messages. It supports acknowledging multiple messages at once.