“Set can consist of a finite collection of alphabets, numerical values, or even real-world objects. In number systems, we have a set of operations to perform mathematical calculations. Similarly, set operations are needed when we need to establish a relationship between two or more sets. In this guide, we will be focusing only on set Union operations. Set union is defined as the distinct elements that are in set A, in set B,  or both sets A and B, where A and B are two given sets.” 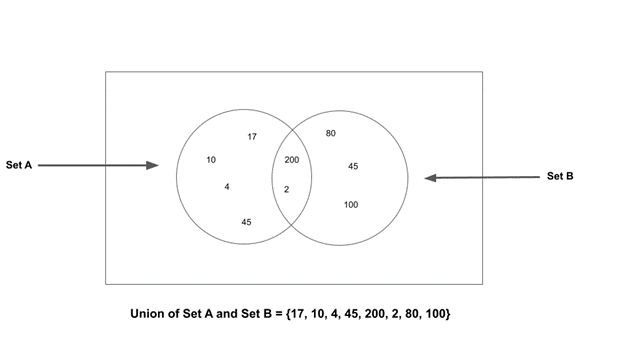 As shown in the above figure, all the distinct elements belong to set A and Set B, or both are called the union of set A and set B.

Redis in-memory data store supports set data types to hold a collection of unique string members in an unordered manner. It supports major set operations such as union, intersection, and difference as well. In this discussion, we will be focusing on the union operation in Redis sets. The SUNION command is used to get the union of given sets. It has O(N) linear time complexity where N is the number of members in all the sets.

The following is the syntax of the SUNION command.

set_key: The key associated with the set.

The SUNION command accepts more than one set. If you have specified a single set in the command, the return would be all the elements belonging to the specified set.

This command returns another set that contains all the distinct members resulting from the union of given sets, as shown in the following figure. 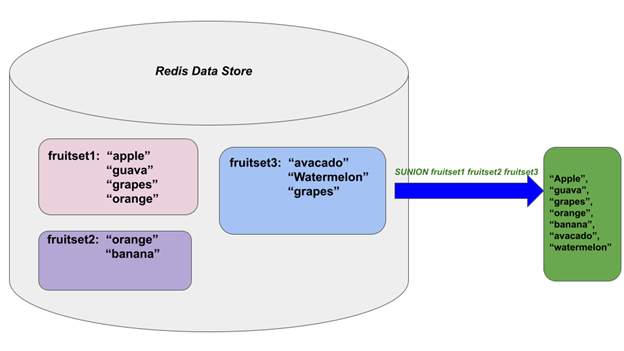 Use Case: Get All the Visitors to Company Websites

Let’s assume that a company maintains 3 websites for different marketing purposes. Each website has a big number of registered users. During the Christmas season, the company plans to send gift vouchers to all the active users who visited their 3 websites. The company keeps track of monthly visitors in a redis data store. Since they need to maintain distinct users who visit monthly, they are using Redis sets here.

If user A visits the website in the early of this month will be added to the set. But the following visits in the same month for user A will not add a new record to the database.

The first set, site1:visitors, is used to hold the user’s visit to site 1.

Next, the site2:visitors set will be created as follows.

Finally, the set site3:visitors, which holds the visitors of site 3.

Let’s inspect each set and verify that all the members have been stored properly. We will use the SMEMBERS command to fetch members per set.

Now the company requires to retrieve all the distinguished visitors of all three sites. This is the union of three sets that we have created just before.

As expected, the resulting list contains all the distinct members from all three sets: site1:visitors, site2:visitors, and site3:visitors.

Let’s specify a non-existing set in the command and see the output.

In the above command, site4 is a non-existing set, but there is no difference in the resulting collection of members because site4 has been considered an empty set by the SUNION command.

We can even specify a single set as the set argument. In that case, the union will contain all the elements in the specified set.

As expected, the resulting set contains all the elements of the site2:visitors set. Overall, the SUNION command is very useful in taking the union of multiple sets, which consumes considerable time when performed manually.

To conclude, the SUNION command can be used to retrieve the union of given sets. This command operates on linear time complexity and has a very simple syntax where it accepts only the keys of the sets you need to get the union. As highlighted in the above sections, the SUNION command returns a list of members resulting from the union of the specified sets. Finally, the non-existing keys that are specified in the command will be considered empty sets.