Redis is a key-value store that comes with several in-built data types. It also includes collection types, such as Sets, Hashes, and Sorted sets. Whenever you have collection types, it is a must to have a method to loop through the elements of a collection. Usually, in a programming context, we use iterators for this purpose.

Redis supports cursor-based iterators. These iterators can incrementally loop through the collection and return a limited number of elements. At the same time, it returns the updated cursor index/id as an integer to use in the next iteration. A cursor is a pointer maintained by the iterator to keep the new location after each iteration. 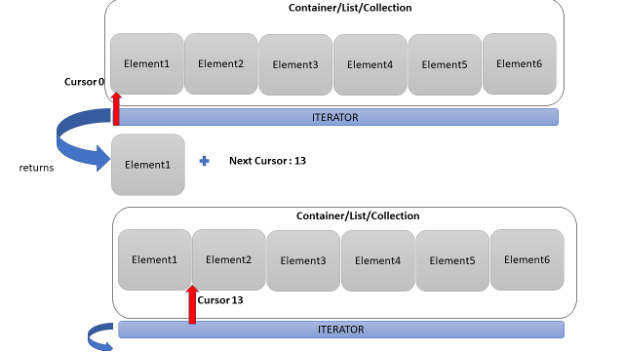 The SCAN command is the base for many other Redis iterators. This iterator doesn’t guarantee the number of elements returned in each loop. It might return 0 elements or all the elements in a given iteration. Also, it could produce the same element multiple times because the collection might change, which is a drawback in the SCAN iterator. The SCAN command returns two values in each execution. The first value is a reference id to the cursor, and the second value is a collection of elements. It always starts from cursor 0. Several other iterators are derived from the SCAN iterator, such as SSCAN, HSCAN, and ZSCAN. These commands have the same behavior but operate on different types of collections.

Since the SCAN command doesn’t guarantee the number of elements returned in each iteration, the only way to notify that the iterator has been looped through the whole collection is to check the returned cursor reference id or index in each execution. If the returned cursor is 0, it indicates that all the elements have been iterated. It is called a full iteration.

set_key: This is the key of the set.

cursor: Reference id of the following cursor, which is returned after each call.

This command would return the next cursor and an array of elements. The returned cursor id can be passed to the SSCAN command in the next call.

Example 1: Iterate Over a Small Set

The previous command will create a new set setOfColors and add 10 members in an unordered manner. We can use the SMEMBERS command to verify the previous operation.

As expected, the set setOfColors has been successfully created.

We can use the SSCAN command to iterate over the setOfColors set as shown in the following:

As mentioned, the command should start with cursor 0. The set’s key has been passed too. Since the setOfColors contains only 10 members, the SSCAN command might return all the elements in the first iteration. Because the setOfColors is a comparatively small set.

As discussed, the command returned two values as the first one is 0. It means the above is a full iteration. There is no need to call SSCAN again. All the ten members have been returned as the second return value of this command.

Example 2: Iterate Over a Big Set

We will be creating a set with more than 20 members.

Let’s iterate over the alphabet set.

As usual, we have started with the cursor 0. Also, the set key has been passed as the alphabet. It only returned 11 members from the first iteration, as shown in the following:

The next cursor is 6. Let’s call the SSCAN command again with the relevant arguments.

Now, it returned another 10 members and the next cursor as 13. We have to call the SSCAN command again to finish the full iteration.

The returned cursor value is 0, which means the iterator has iterated through the whole set.

We can use the MATCH parameter to filter out the returned members based on a specified pattern. Let’s create a new set called userNames with some members.

We will call the SSCAN command with the MATCH argument to fetch all the usernames starting with “ju”.

We have three usernames starting from “ju” in the set. But it has returned only one in this iteration. Hence, we need to call the SSCAN command again with the updated cursor.

The iterator has looped through all the elements in the set, and we have three members matching our pattern.

Example 4: Limit the Number of Elements Per Call

Redis SSCAN command returns around ten elements per call by default, but you can explicitly specify the number of elements to be returned per call. That can give a considerable performance boost to your application.

Let’s use the previous set and limit the number of elements returned per call to three. Usually, the returned element count will fluctuate at around 3. We can specify the COUNT argument value to achieve this behavior.

Usually, it returns around 10 members, but now it’s only 4 elements. The same happened with the following calls too.

This is very useful when you are dealing with large sets.

Redis includes several collection types, such as Sets, Hashes, and Sorted sets. Usually, the iterators can be used to loop through the collection types. The SCAN iterator is used to iterate over keys in a Redis database. It is a cursor-based iterator that returns two values per call, where the first is the updated cursor and the second is the array of elements. The SSCAN command has the same behaviors as the SCAN command, but it is specific to Set types. It can scan through a set based on a pattern too. Also, the command is capable of limiting the number of returned elements per call.