“If your next web application looks for a way to store a collection of strings without duplicates, Redis sets are the go-to data structure. Redis sets can contain more than four billion string type members, which are more than enough in practical use cases. Several pre-built commands are available to perform basic to advanced operations on sets such as addition, removal, existence check, etc. The most important thing about the basic set operations like add and remove is that they have constant time complexity.”

Redis SREM command is used to remove elements from a set stored at a specified key. From version 2.4.0, this command supports removing multiple members simultaneously. Validations are in place for the following scenarios.

If a specified member is not a part of the given set, that member will be skipped. 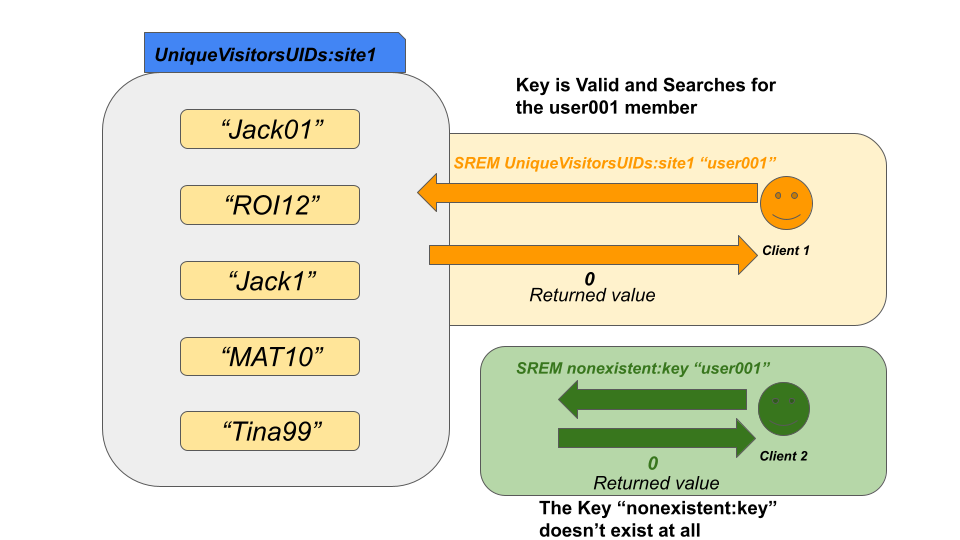 The SREM command has very simple syntax, as shown in the following.

redis_key: The unique identifier where the set is stored.

member: The member to be removed from the list. Optionally, you can specify multiple members.

The SREM command returns an integer value which is the count of the members removed successfully. As an example, if three members were removed from the set, the returning value would be 3.

In addition, if you specify a key that points to a hash or list but not to a set. In such a case, the SREM command would raise an error.

Example 01 – Remove a Member From the Set

Let’s assume that we are going to store top fans of your personal website based on the interactivity level each month. Since sets keep non-duplicate members, we can assure that the same user will not be added multiple times.

We will be using the SADD command to add the top 5 fans in January to the set stored at key topfans:january.

Due to the unethical behavior of the member “TInaMaddy”, we got a requirement to remove her from the set. Now the SREM command is the ideal candidate to do this.

As expected, the output is 1, which means one member has been removed. Let’s inspect the existing members in the set as well.

As shown in the above output, the member “TinaMaddy” has gone from the list.

In some scenarios, we might need to remove more than one member from a set. Hence, the SREM command supports multiple member arguments. Let’s say we need to remove both the members “JackNelson” and “JoshInglish”. The following command would do that for you.

Command returned the integer 2, which means two members have been removed.

The important thing to notice is that the SREM command consumes constant time in both scenarios. Hence, it is recommended to use in low latency applications.