Redis can be identified as a Remote Dictionary Server that is mainly designed for speed. In addition, it is widely utilized as an in-memory cache and NoSQL database. As a database or cache, it is vital to provide a high rate of data access, high availability, data sharding, and scalability features. Redis introduced Sentinel and Cluster solutions to address the mentioned aspects.

The Redis Cluster technology that was introduced from version 3.0 enables the horizontal scaling for a given Redis deployment. With Redis clusters, the data is split across multiple cluster nodes that provide a consistent and reliable data service layer for applications.

It is a must to have at least three master nodes for a cluster to function properly. In addition, each master node should have at least a single slave node. Furthermore, Redis clusters enable high availability up to some degree by promoting a slave node associated with a failed master instance in a hardware/software or network failure.

Each cluster node communicates with other nodes using a binary protocol-based node-to-node communication channel. In addition, each node is open to client connections by utilizing the standard TCP port.

The following is a high-level sketch of a basic Redis cluster configuration: 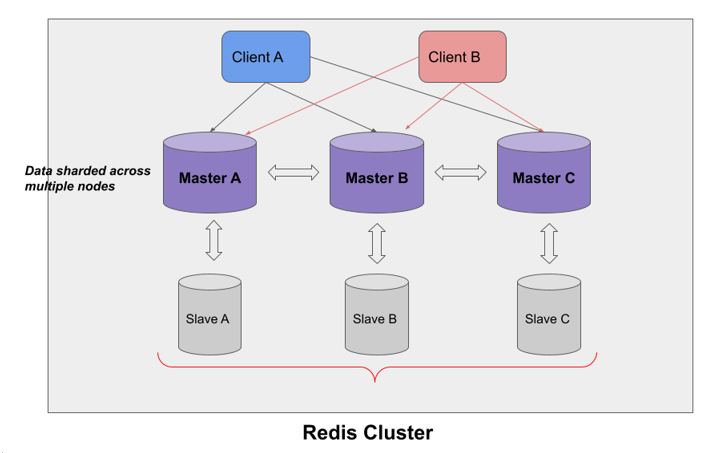 Redis Sentinel is a high-availability approach for Redis deployments that runs as a separate program in the background. It brings a lot of features to your Redis deployments by constantly checking the master and slave node status, notifying the significant changes related to the monitored instances via an API, initializing the automatic failover process when a master failure occurrs, and acting as a source of authority for clients to find out the currently active Redis master node IP address.

A Redis sentinel setup can be implemented using at least three sentinel nodes which can avoid most of the problems in a given Redis deployment. Furthermore, in a given sentinel configuration, the Quorum value defines the minimum number of sentinel nodes that should confirm when a master is failed.

Generally, the Redis Sentinel is primarily employed to support the high availability of a Redis database where it performs better than in the clustering approach.

The following is a high-level illustration of a minimal Redis sentinel configuration: 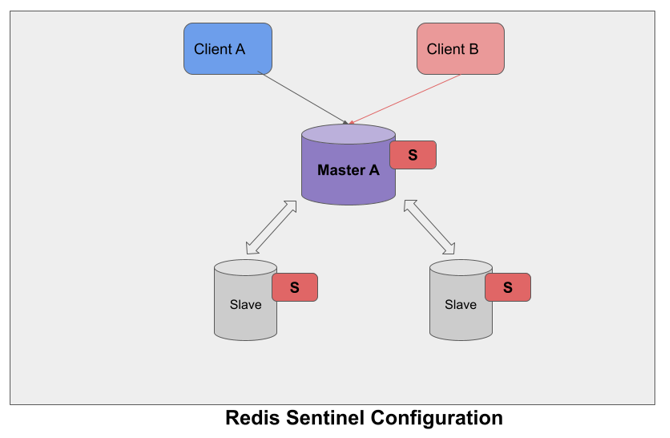 Redis cluster and sentinel are two approaches where each addresses different aspects related to a Redis deployment. To highlight, the Redis cluster approach is more suited for complicated implementations that deal with massive datasets where it provides automatic data sharding for better read/write querying performance, automatic master failover, and replication with high availability up to some extent. Furthermore, the Redis cluster nodes can be scaled effortlessly.

On the other hand, the Redis sentinel is more focused on smaller implementations with high availability in mind.

Redis cluster doesn’t fully support high availability. Because, if the majority of the masters are not available, the cluster may go down. In contrast to the cluster approach, the Redis sentinel offers high availability without any human intervention. Most importantly, the sentinel can survive even with a single running master instance when a critical failure occurs.

Redis cluster offers sharding capabilities where the data is distributed among multiple nodes when clients have network access to all the nodes. It enables increased performance and data storage capacity.

On the other hand, Redis sentinel does not offer sharding capabilities. Because the sharding causes the imbalance utilization of the master and slave.

Redis clusters are highly scalable. It supports up to thousand nodes in a given single cluster setup. Furthermore, Clusters allow adding and removal of nodes dynamically and effortlessly. Redis sentinel is not scalable and writes are directed to the master instance, hence the sentinel is not able to deal with the read-write separation issues.

A fully functional Redis sentinel can be built with just three nodes. But to set up a Redis cluster, it requires at least three master nodes and three slaves attached to them which is more costly than in Redis sentinel deployment.

To summarize, the Redis Cluster approach is more focused on complex deployments when high scalability, high performance, and high data storage are important and the high availability is not significant. On the other hand, Redis sentinel is primarily built for simple applications that are mainly focused on high availability. As compared, both solutions come with their pros and cons but to support the end users with more finely-tuned Redis deployment.