The string type is the most fundamental data type that Redis offers. Redis strings are capable of storing texts, serialized JSON objects, images, audio, and even numerical values. In this guide, we will focus on the numerical values and the manipulation of integers. Redis doesn’t support the separate integer data types to hold the numerical data. If a Redis key contains a string that can be represented as an integer, Redis can interpret the number values as base-10 64-bit signed integers. 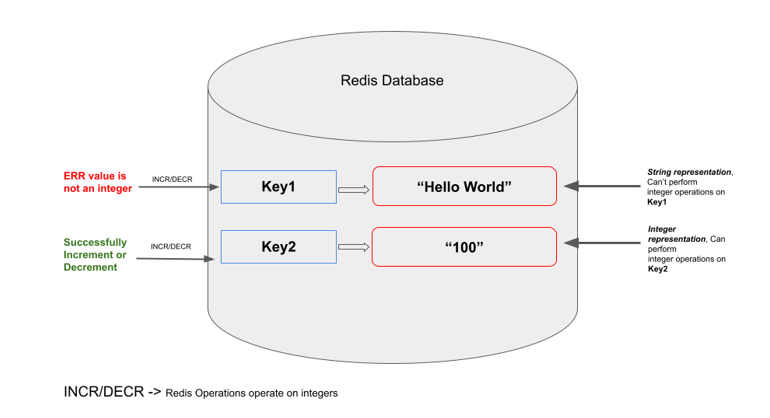 The number manipulation is an extremely useful feature to have in any database. Redis offers several useful operations to work on integer types such as INCR, DECR, INCRBY, etc. In this guide, the DECR command which operates on integer types is explained in detail.

The following is the syntax of the DECR command:

Key: The key which holds the string value.

The DECR command returns the resulting signed integer after the decrement operation. If the specified key doesn’t exist, the command sets the value to 0 and then decrement it by one. Also, an error is thrown when the value is a non-string or cannot be represented as a 64-bit signed integer. This command operates on constant time complexity(O(1)) which is extremely fast.

Use Case – Decrement Player Health in an Online Game

Let’s assume an online game where each player’s health is incremented by one when a medi-pack is revealed. Similarly, the health decreases by one if the player falls or is hit by another player.

The ideal candidate to store a player’s health is a Redis string type where we can store the health as an integer. Let’s create a key health:playerID:1 and set its value to 10. We can use the SET command as follows:

We can use the GET command to verify the value stored at health:playerID:1.

Let’s say that the player with the ID 1 gets hit and the health should be decreased by one. The DECR command can be used as follows:

As expected, the DECR command prints the updated value after the decrement operation as shown in the following figure:

Also, we can inspect the value stored at key health:playerID:1 with the GET command.

As expected, the value decreased by one.

The DECR operator is valid with negative numbers as well. Let’s store a new negative numerical value at the key negative:value1.

We can inspect the value using the GET command as follows:

The following command shows how the DECR command is used on the key negative:value1:

The DECR Command on Non-Integer Values

There are some edge cases when we try to use the DECR command on a Redis key that holds a non-string data type or a string that can’t be represented as an integer. The DECR command throws an error in those cases as shown in the following example:

The “Hello” is a text that can’t be converted to a signed integer. So, the DECR command raises an error if we call it against this key.

The DECR Command on Non-Existing Keys

In some cases, you might call the DECR command on a key that doesn’t exist in the Redis data store. So, the command creates the specified key and set its value to integer 0. At the same time, the value is decreased by one.

As expected, the output is -1.

Overall, the DECR command is very useful to implement the counters in low latency applications.

In summary, DECR is one of the commands that operate on numerical values that are stored at a given Redis key. Redis doesn’t support a separate integer data type. So, the string type is used to hold the numerical values as well. As examined, if the string value can be represented as a 64-bit signed integer, the DECR command can be used to decrement its value. Most importantly, it operates on constant time complexity. Also, the DECR command is widely used to implement the counters.