The horizontal scaling always focuses on increasing the number of instances instead of growing computing power per instance. Redis clustering is based on horizontal scaling, where a set of nodes takes care of the instance’s continuous functioning.

Redis cluster consists of multiple nodes where each node contains a range of hash slots. Usually, a cluster has 16384 hash slots. Each Redis key is associated with a hash slot, and to compute the hash slot per key, Redis uses the CRC16 of the Redis key modulo 16384 algorithms. It is based on the master-replica technique where one master node fails, and the respective replica fires in and continues to operate on behalf of the failed node. 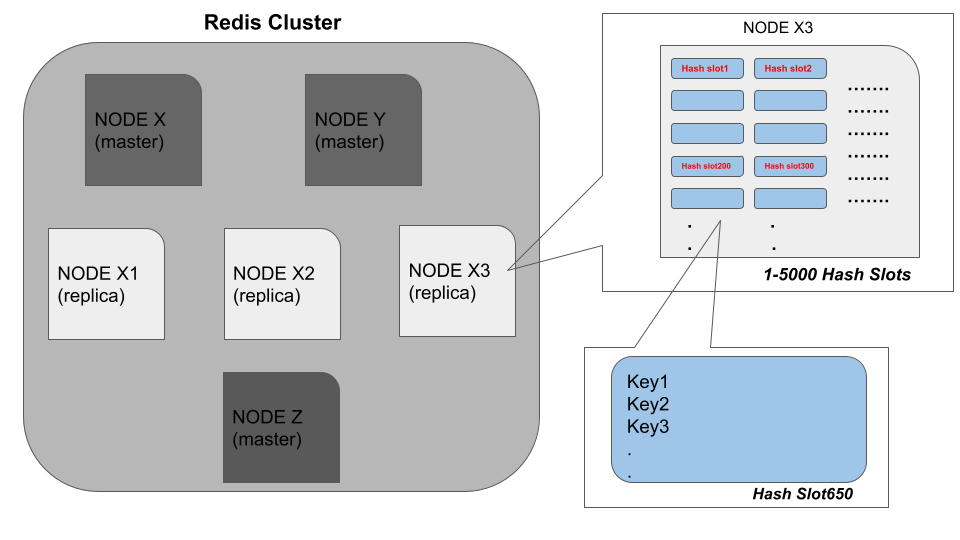 Let’s assume that the NODE X fails due to a network failure. Then the Redis cluster will assign the workload of the NODE X to the replica NODE X1, which will ensure smooth functioning. Also, Redis clusters can split the incoming data to different nodes automatically.

Several commands are available to use against Redis clusters. The CLUSTER command is a container command which has several subcommands. You can use the cluster help subcommand to check the list of available subcommands with their usage.

As expected, it returns an array reply as shown in the following. 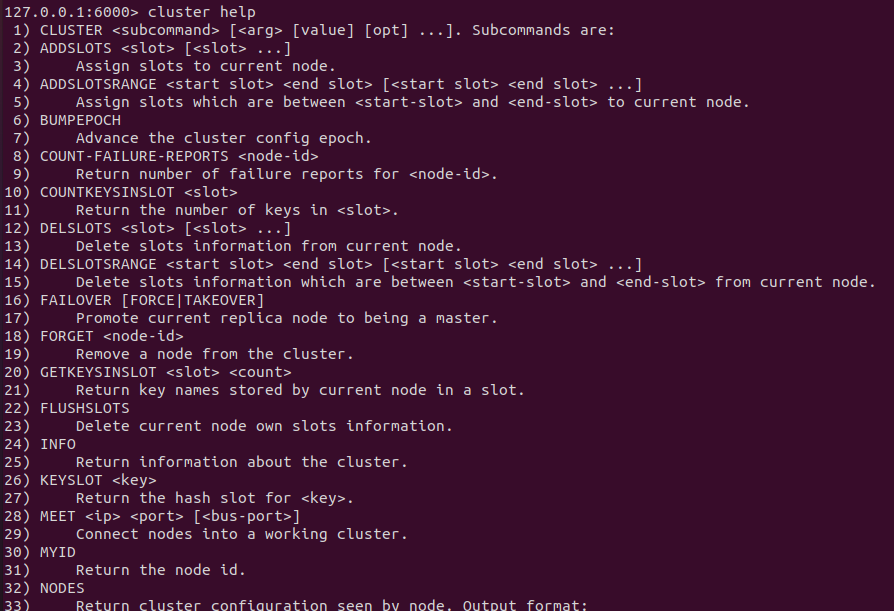 In this guide, we will be focusing on the KEYSLOT sub-command that is associated with the container command CLUSTER.

The KEYSLOT command is used to check the hash slot value for a given Redis key which returns an integer value. Whenever you need to know about the associated node for a specific key, this command will be useful. Another use case would be, testing your hashing algorithms by comparing them with the hashes generated by this command and checking for similarity. In addition, the KEYSLOT command has linear time complexity.

The following is the syntax for the Redis KEYSLOT subcommand.

redis_key: This is the unique identifier that we use in Redis data stores to identify any value stored.

This command returns the hash slot value of the specified Redis key stored. Usually, this value is an integer ranging from 0 to 16383 for a given cluster.

Let’s create a Redis cluster with six nodes where three of them are master nodes, and the rest are replicas. We can use the SLOTS subcommand to check how the nodes have been assigned with the hash slots.

As expected, the cluster information has been output as in the following. 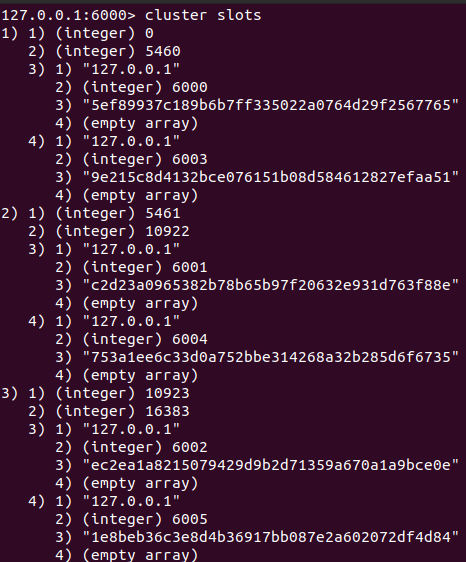 Let’s add a couple of keys to our Redis cluster, as shown in the following.

Now we can use the KEYSLOT subcommand to check what are the hash slots that each key has been assigned. 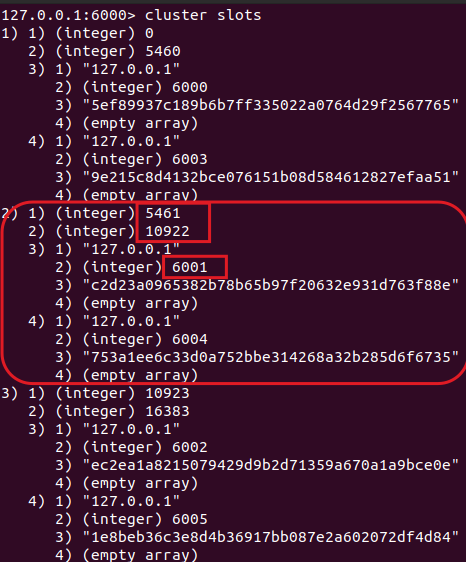 The master node is 6001, and this key should be stored there. The same procedure can be followed to identify the node for the traveller:2:place key.

The KEYSLOT command supports hashtags where the Redis cluster key hashing algorithm hashes only the characters between the { and }. Whenever a Redis key follows the mentioned pattern, It will generate the hash slot based on the characters inside the curly braces, and the other characters are not considered. With the hashtags, we can force to store multiple keys in the same node, as shown in the following.

Let’s create a couple of key-value pairs, as shown in the following.

As expected, both the commands return the same hash slot value, 8276, which means keys are stored in the same node. As per the above examples, you can see how useful the KEYSLOT command is when dealing with Redis clusters.

To summarize, Redis supports sharding, replication, and high availability by horizontal scaling. The horizontal scaling has been achieved using the Redis clusters. As discussed, each cluster is a collection of nodes where a node can hold several hash slots. A cluster can hold 16384 maximum hash slots and around 1000 nodes. As cited, Redis clusters follow the master-replica technique where a master node fails, and the replica will start to function on behalf of the failed node. Redis has a list of commands to operate on clusters. The KEYSLOT command is one of those which is used to get the hash slot value for a specific Redis key. This command supports the hashtags as well.