Redis comes with tens of in-built commands to operate on different data structures such as lists, hashes, sets, and etc. Most of the commands perform a specific type of job and return immediately. In addition, a set of commands are available to use with blocking enabled. The blocking operations hold the connection to the Redis server until an external event finishes. The great thing about blocking commands is that they do not block the whole Redis server, instead they block only the calling client connection. 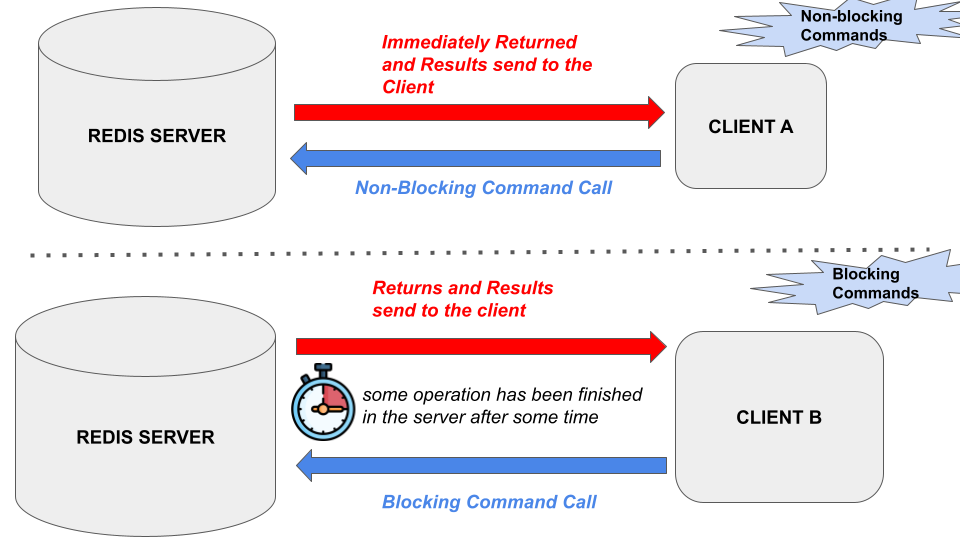 Redis has several blocking commands which operate on list data structures. The LPOP command is used to remove an element from the head of a given list. It will remove the head element from the list and immediately returned. The removed element will reach the client. Whenever no elements are present in the list, the command will return immediately with a nil value. Its blocking variant is the BLPOP command which will hold the connection to the server whenever no elements are present in the list. The BLPOP command will wait until at least an element appears in the list to return. There are several blocking commands available to use with lists. In this guide, we will be focusing on the BRPOPLPUSH command.

The BRPOPLPUSH command will remove an element from the tail of the source_list, first. Then, the element will be pushed near the head of another destination_list. Whenever the source is empty, it will hold the connection as shown in the following: 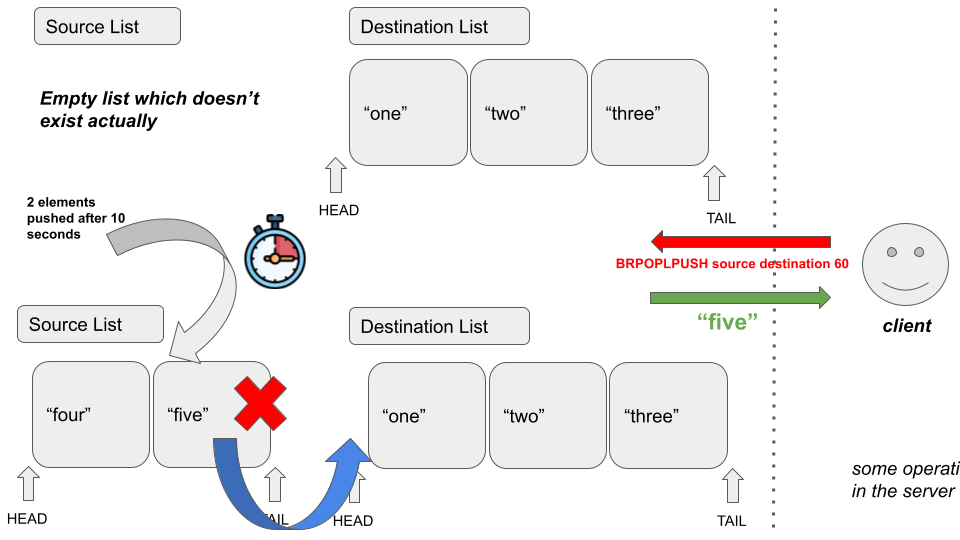 This command has a constant time complexity and it has been deprecated from Redis version 6.2.0. It is recommended to use the BLMOVE command with RIGHT and LEFT arguments. The BRPOPLPUSH command returns the element being popped from the source and pushed into the destination. The output will be a null value if the timeout is reached.

The biggest drawback of this process is: if there is a network or the client application failure, the returned piece will be lost before the processing at the client-side. Hence, a separate reliable queue is needed to store the popped element from the source list while returning it to the client. Furthermore, the source list might be empty when there are no background jobs produced by publishers. Hence, we need a way that client connection will be held and alive until a background job is available at the source list. The BRPOPLPUSH command is the ideal candidate to achieve this.

Let’s make a call to the Redis server with the BRPOPLPUSH command as shown in the following. Both the source and destination keys do not exist.

We have specified the timeout argument to 0 which means the BRPOPLPUSH operation will be blocked forever until you terminate it manually. Now, it is waiting for at least a single background job to be available in the list stored at key backgroundjobs_list.

As expected, the “b1” element has been returned to the client who held the connection until an element is available in the source list backgroundjobs_list. Let’s inspect the destination queue reliablequeue_list. Here, we are using the LRANGE command as shown in the following:

The destination queue contains the “b1” element that is popped from the source list. This command guarantees that the elements are stored in another queue without losing them when a client crashes. The BRPOPLPUSH command can be used as a circular list when both the source and destination are the same.