A process in which a specific function calls itself either directly or indirectly is known to be a recursion, and that respective function is a recursive function. The recursion process deals with the iteration of several numbers to the same function. To terminate the execution of a recursion process, we need to have a base case followed by any condition. This tutorial uses the involvement of recursion functions in C++, so before reading this, you must be familiar with the basics of this programming language.

Recursion is an effective approach to dissolve the issues like complex mathematical computations tasks. This is done by distributing the task into sub-tasks. This process is done by following the divide and conquer rule. It’s not a mandatory thing to always use a recursion process in your program for the repetition. Any problem that is resolved through recursion can also get solved through iteration. But the recursive function is more efficient in programming as the code is very short and easily understandable while performing the same task. The recursion process is always recommended for issues like searching and sorting, tree traversals, etc.

Note: The recursion process must have a terminating condition or a base class. In the second case, it will lead to infinite executions like a loop of iterations.

The basic syntax of recursive function is given as:

The concept is to divide a problem into many smaller problems and then add all the base conditions that can stop the recursion.

In any recursive program, the solution of a bigger problem is expressed in smaller problems.

The statement/condition of ‘n < =1’ is defined here, and hence the larger value can be solved by converting to a smaller one until the condition of the base case is fulfilled. If we don’t use a base condition in our program, then there will be no ending point specifying the code, the infinite execution will occur. Here we will use a sample example.

Now consider a sample of a recursive function in which we take a value in the main program and then pass it to the function. Inside a function, we use an if-else statement. The ‘if’ part of the statement refers to the base condition to terminate the function or to limit the output. This will be applied when the value is less than 1. 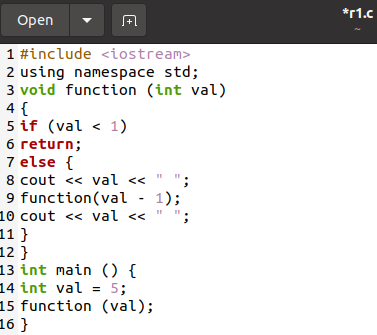 Whereas the main feature is applied on the ‘else’ part of the function. This is the recursive function.

The value is displayed before and after this statement, so the output will contain the numbers in descending and in ascending order. The execution of the code is done through a g++ compiler. ‘-o’ is used to save the output of a source code in an output file.

Now, we want to see the effect of the base condition in this program. We will see the resultant value; if we remove the if-else statement from the same program as described above, what will be the output. 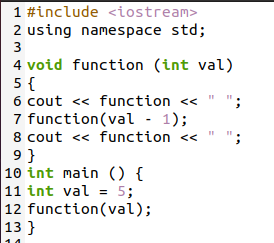 This same output lasts many lines until a message of core dump is shown.

The above example is the simple addition of the numbers. The second approach deals with the usage of a recursive function.

Now you can point out the difference between both the approaches. In the second approach, f() is a basic dissimilarity, as it is itself called.

Whereas a sample for the indirect recursion is represented as:

We will now elaborate on both types of recursive functions through some basic examples.

This example deals with the calculation of the Fibonacci series. Again the concept is the same; a conditional statement is used here to stop the condition; the value should be equal to zero. Otherwise, if the value is equal to 1 or 2, it will return 1. As this series formation needs 2 numbers, so the number used in the main program should be greater than 2. The statement formula for the Fibonacci is written in the ‘else’ art of the condition. This is mainly the recursion of the program. 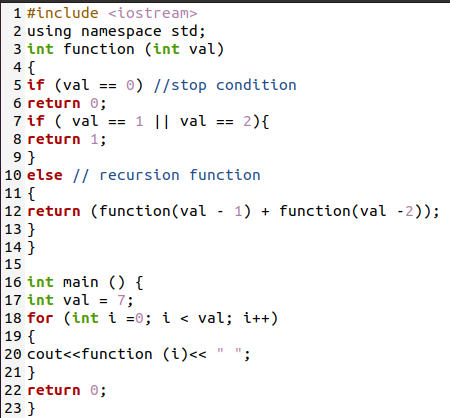 Whereas the main function will initiate the functional call bypassing the value. This value is a number up to which the output should be. The output can be checked through the Linux terminal by a g++ compiler.

This example deals with the factorial calculation of a number. For this calculation, a number must be greater than 1, so here we have applied a base condition; if this part of the ‘if’ statement is fulfilled, then the program will be terminated; otherwise, the mathematical operation is applied to the number. 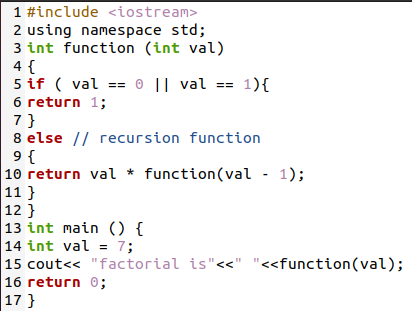 The resultant value is shown below.

We will apply the same calculation of factorial indirectly. As we have described earlier, that in indirect recursion, the functions don’t call it, so we need another function for this purpose. Take an example that has two functions. In function A, the recursion function is declared in the same way as in the previous example, but the function call is for the second function, Function-B. Function B contains the same calculation method, and it contains the recursive call for function A. 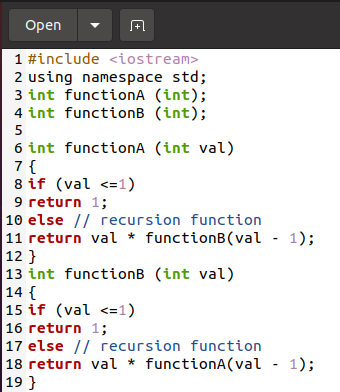 In the main program, a function call to function A is made.

When you see the output, you will notice that the answer for both the recursion methods is the same, but only the difference is in the approach used.

‘C++ recursive function’ has many advantages as it is used in the searching and sorting processes. The base condition has the main role in the execution of recursion, as it limits the output and infinite execution. The commonly used examples are explained here to provide the user understanding of recursion.