The full form of YAML is Yet Another Mark-up Language. This file format is very popular now to store serialized data that is human-readable. It is mainly used for configuration files, but it can be used for other purposes also. Different types of scalar data such as number, string, etc., and compound data such as list, the dictionary can be the content of this file. The extension of this fie is ‘.yaml’. Multiple modules exist in Python to read the YAML file. The use of the PyYAML module to read the YAML file in Python has shown in this tutorial.

PyYAML is the best module of Python to read the YAML file. PyYAML module is not installed with Python by default. So, you have to install this package before checking the examples of this tutorial. Run the following command to install PyYAML.

Create a YAML file named client.yaml with the following content to use this file in the next part of this tutorial.

Example-1: Read the YAML content after Converting a python object


# Declare a python object with data


# Convert and print the JSON data in YAML stream 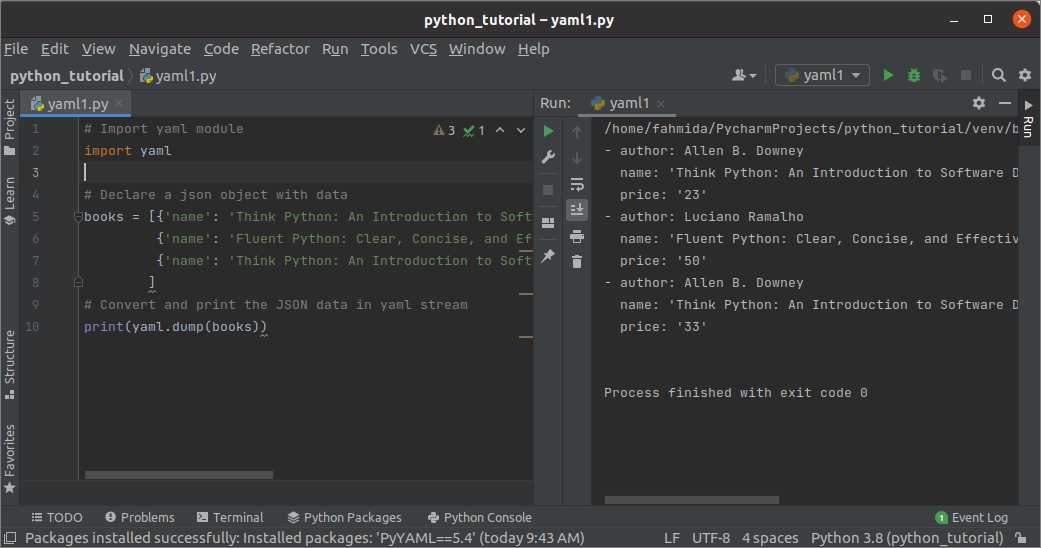 Example-2: Read the YAML content from a YAML file


# Load YAML data from the file


# Sort YAML data based on keys

The following output will appear after executing the above script. After converting the content of the client.yaml file into a python list of dictionaries, each dictionary of the python list has converted into each member of the YAML content like the previous example. The value of the sort_key parameter of the dump() function is set to True by default. So, the output shows the sorted YAML content based on the keys.

Example-3: Read the keys and values from a YAML file

Create a python file with the following script to read and print the key and value separately from the client.yaml file. After loading the file’s content into the read_data variable, the item() function has used to read each key and the corresponding value from the content. The nested ‘for‘ loop has used to iterate the full content of the file and print the key-value pairs.

# Load YAML data from the file

# Iterate the loop to read and print YAML data

The following output will appear after executing the above script. The file’s content has not been sorted because the dump() function has not been used in the script.

# Convert the YAML data into a dictionary

The following output will appear after executing the above script. A list of dictionaries has been printed in the output.

The ways to read YAML content from a python object and a file have been shown in this tutorial by using various examples. The concept of parsing the YAML file using the PyYAML package will be cleared for the python users after practicing the examples of this tutorial.