The Raspberry Pi device is full of surprises and wonders and no doubt that this device will be an amazing tool to develop different projects. Every 2-3 years, different versions of devices and modules are released to catch people’s interest. They offer superior features and provide people with the ease to carry out various computational tasks. The Raspberry Pi compute module 4 is another recent addition to the Raspberry Pi family, which can effortlessly replace your hardware design onto the carrier board.

If you don’t know about the Raspberry Pi compute module 4, you should read out this article where you will learn about the module.

What is Raspberry Pi Compute Module 4

Seeing the popularity of the Raspberry Pi, the Pi’s community introduces compute modules that allow the users to add more freedom and easiness to their project building experience.

The Raspberry Pi compute module is perfectly designed for those individuals who want to create their own PCB. It’s a stripped-down version of Raspberry Pi 4 without any ports and offers the same speed and performance to the users at a minimal cost. It fully meets the needs of industrial engineers and is ideally suited to be used with embedded systems. 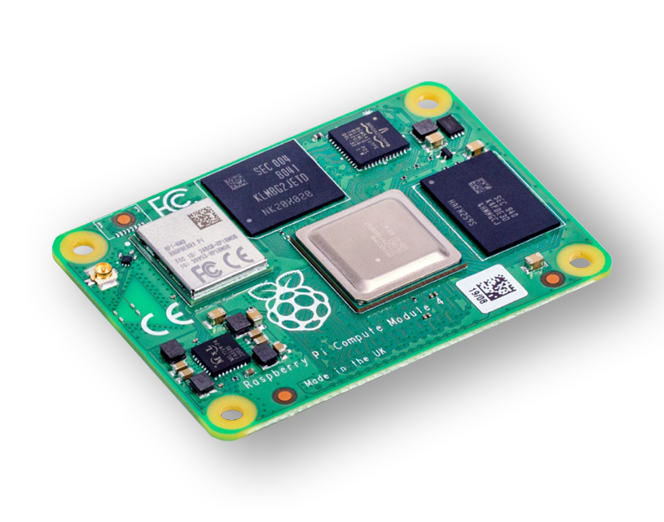 The Compute Module 4 has a 1.5GHz quad-core BCM2711 processor, similar to the one installed in the Raspberry Pi 4 device. The dual video output and a wide variety of interfacing make it a handy module. This version comes in 32 variants and each variant has different RAM size and flash options with and without the support of wireless connectivity.

Unlike Raspberry Pi 4, the compute module 4 now includes a 1GB LPDDR4-3200 SDRAM model, making it affordable for people to acquire this module with almost equivalent characteristics. On the improvement side, the module features a built-in eMMC storage option which is much faster than any SD card and its capacity goes from 0GB (low version) to 32GB. Those who wish to boost their WiFi connectivity can obtain it by including the integrated external antenna with the module, as these options are unavailable in the Raspberry Pi 4 model.

As the Raspberry Pi compute module doesn’t include ports option, you will be required to get a carrier board or build your own one to make the module operational and use in various projects.