An iterator is a valuable tool for Python. It is an object used to iterate all the elements of a collection. Iterator gives access to the elements of a container, but it does not do the iteration on its own. It works like a database cursor and is used to read the record list one by one. For example, a ‘for’ loop that iterates the values of a container works as an iterator. Python has many in-built iterators for iterable objects, such as lists, tuples, dictionaries, etc. Without these iterators, ‘itertools‘ functions can be used to return other iterators in Python. This article shows how to use the loop as an iterator, custom iterator, infinite iterator, and control infinite iterator in Python 3. Some uses of the ‘itertools’ functions are also explained in the last part of this tutorial.

This method is used to initialize the iterable object. The returned object has the method ‘_ _next_ _()’ in Python 3.

# Iterating an existing file using for loop
print("\n\nReading a file line by line using for loop")
for line in open("test.txt"):
print(line, end="")

The following output shows that the characters of the string value; the lines of the test.txt file; and the items of the tuples, list, and dictionary are printed after running the script. 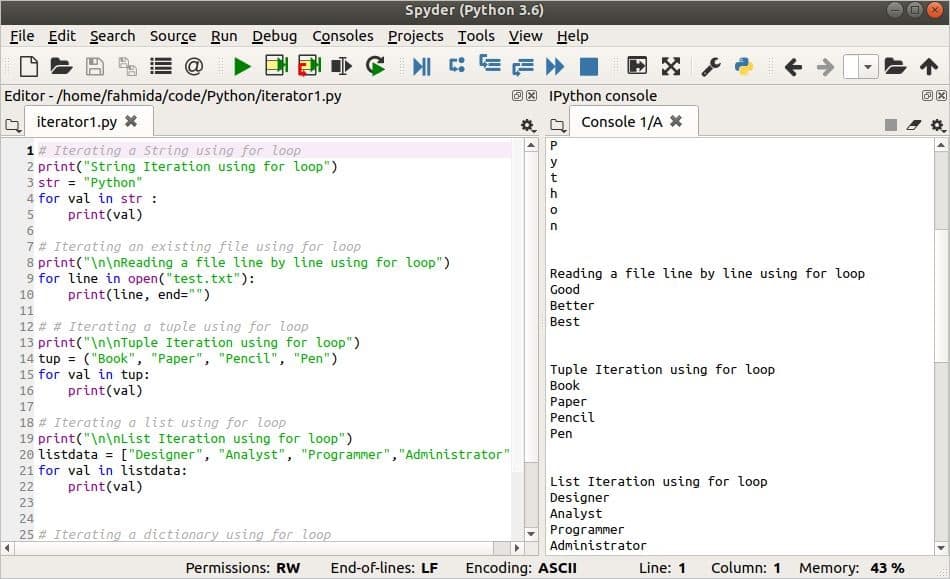 Example 2: Iterating Lists with ‘while’ Loop

# Declare and infinite while loop
while True:
try:
# next() method is used for iterate next value
value = next(init_iter_object)
print(value)

except StopIteration:
# Terminate from the loop after iterating all values
break

The following output shows that each value of the list has been printed in each line by using the ‘next()’ method after running the script. 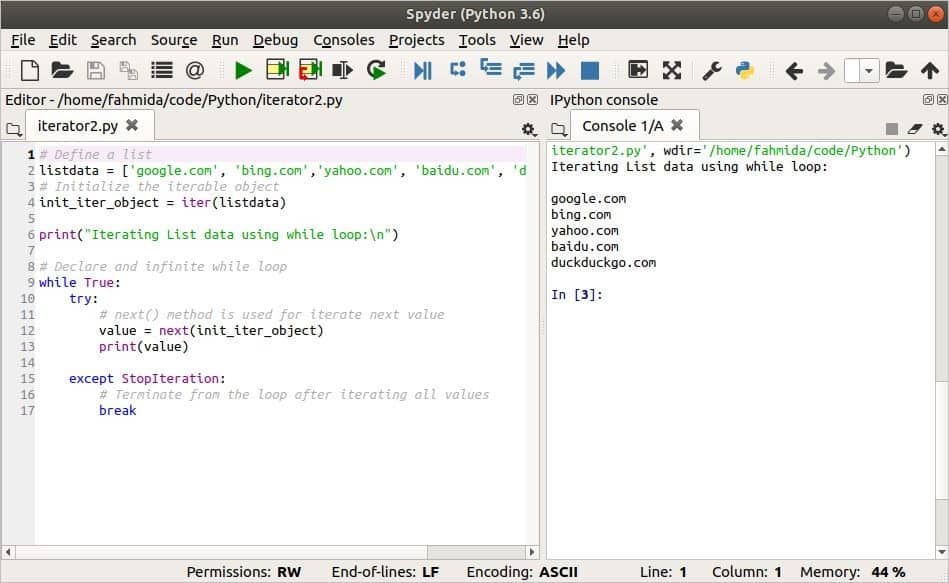 print("The values of the tuple are:\n")

# Define an infinite while loop
while True:
try:
# iterate and print value using __next__() method
print(init_iter.__next__())

except StopIteration:
# Terminate from the loop after iterating all values
break 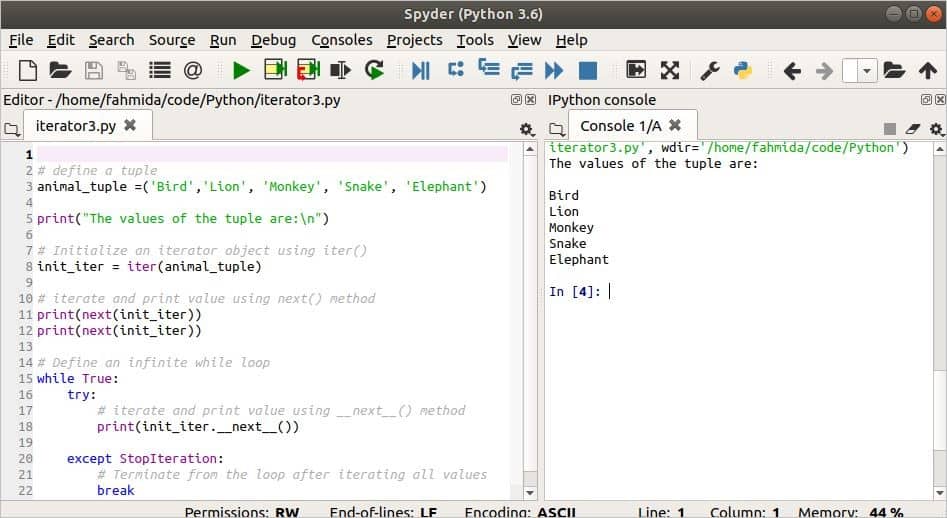 Iterating with a Custom Iterator

This section shows how different types of custom iterators can be implemented by creating classes. Both the ‘__iter__()’ and the ‘__next__()’ methods will be implemented in a class, and the ‘while’ loop will be used to iterate the values of the iterable object.  The next part of this article will also show how to create an infinite custom iterator and control the iteration.

Example 4: Use of a Simple Custom Iterator

The following script allows you to calculate the value of xn by using a custom iterator without using any built-in function of Python. The class named ‘x_to_the_power_n’ is declared in the script. The ‘__init__()’ method of the class will initialize the values of x and n that will be used at the time of object creation. The ‘__iter__()’ method will initialize the class variable, which will store the ‘result’ variable of the calculation in each iteration. The values of x and n will be taken as input from the user. An object of the class ‘numbers’ is created with x and n. Next, an iterable object named ‘iter_obj’ is created to call the ‘__next__()’ method for n-1 times by using the ‘while’ loop to calculate the value of xn. In each iteration, the value of x will be multiplied by the previous value of the ‘result’ variable. After terminating the ‘while’ loop, the ‘__next__()’ method will be called again to print the value of xn.

''' Create a class to calculate the
x to the power n using iterator
'''
class x_to_the_power_n:

# Create an object of the class
numbers = x_to_the_power_n(x,n)

# Retrive the next value using next() method
next(iter_obj)
i+=1

except StopIteration:
# Terminate from the script if no value exists
print(next(iter_obj)) 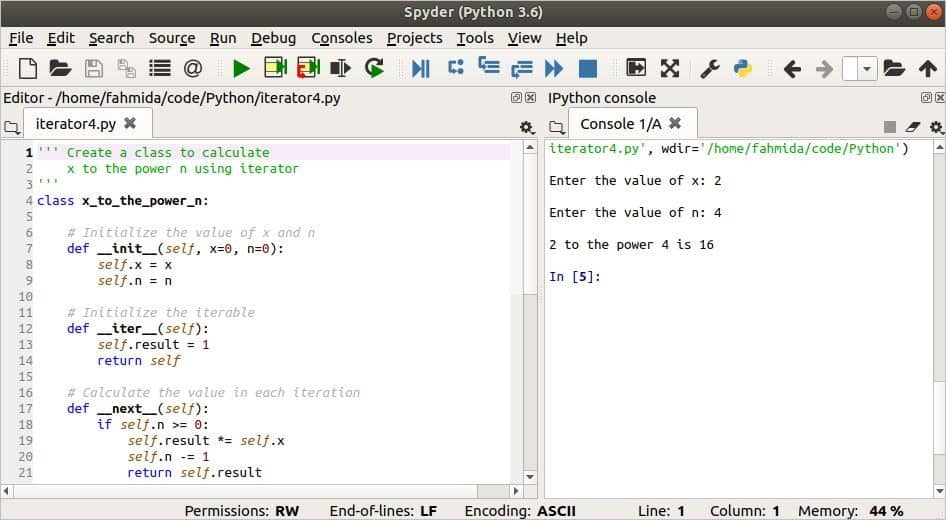 Example 5: Use of an Infinite Custom Iterator

The following script will continuously print the numbers that are divisible by 5 with a delay of one second until the user presses Ctrl + c to generate the ‘KeyboardInterrupt’ signal. The infinite ‘while’ loop is used here to create an infinite custom iterator. The ‘time’ module is imported at the beginning of the script to use the ‘sleep()’ method to delay each output for one second. The number 5 is initialized to the ‘num’ variable as the first divisible number in the script, and the next number is generated by adding 5 with the previous value of the ‘num’ variable.

'''
Create a class to generate the numbers
which are divisible by 5 continuously
'''
class Number_Divisible_by_five:

# Define infinite loop
while True:
try:
# Go for next iteration
print(iterObject.__next__())
except KeyboardInterrupt:
print("Ctrl+C is pressed.")
# Terminate from the loop when Ctrl+C is pressed
break

The following output shows that the number started printing from 5 and continuously printed the next numbers one after another with a one-second duration. When the user pressed Ctrl + c after printing the number 60, the message ‘Ctrl+C is pressed.’ was printed, before terminating the script. 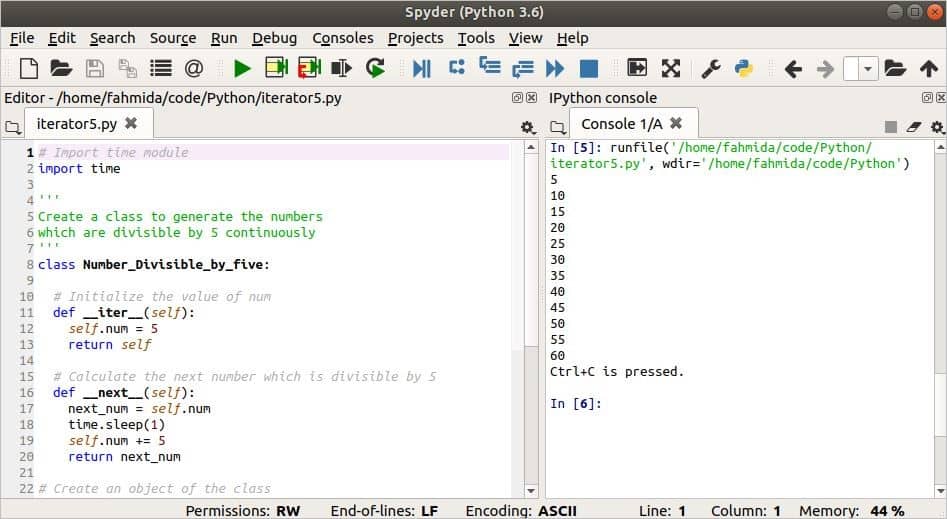 The following script shows how to stop the custom infinite iterator after completing a specified number of iterations. The ‘__iter__()’ method of the class will initialize the values of the ‘n’ and ‘result’ class variables. The script will calculate the squares of the numbers, starting from 1, that are stored in the variable n, and print the square value of n until the value of n is greater than 5. An infinite while loop is declared here to call the ‘__next__()’ method to print the square value of n. When the value of n reaches 6, the ‘StopIteration’ signal will generate to terminate the loop.

# Define infinite loop
while True:
try:
# Go for the next iteration and print the square value
print("The square of %d is %d" %(iterObject.n,iterObject.__next__()))
except StopIteration:
print("\nTerminated from the loop.")
# Terminate from the loop
break

The following output shows that the infinite custom iterator was terminated when the value of n became greater than 5. The script calculated and printed the square values of the number values from 1 to 5. 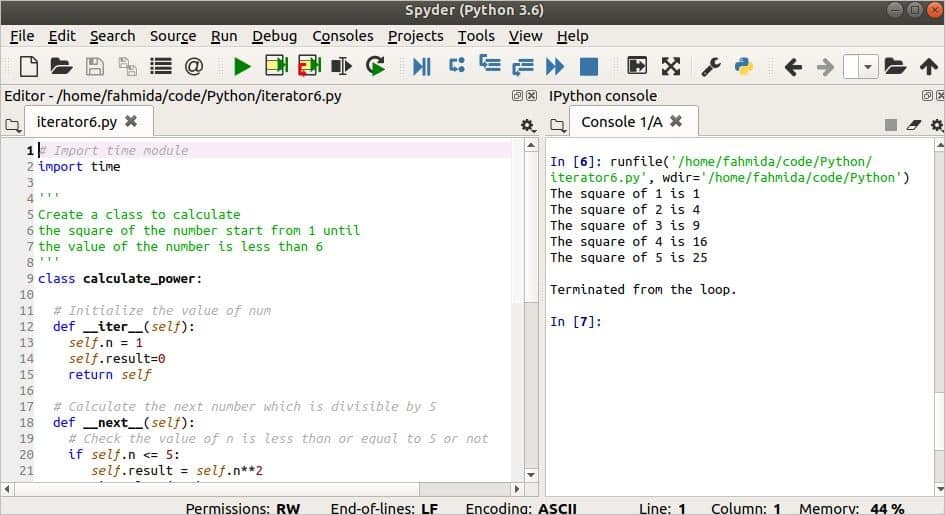 Python has a built-in module named ‘itertools‘ that can be used to create an iterator for iterating data using a loop. The next section of this article shows how to use three functions in this module.

The ‘itertools.cont’ function can be used with the ‘map()’ method to generate sequential data and with the ‘zip()’ method to add sequences by using the count parameter of this method. The syntax of this function is given below.

Example 7: Use of count() Function of itertools

The following script will calculate the sum from 0 to n numbers, where the value of n will be taken from the user. The ‘count()’ function is imported from ‘itertools’ at the beginning of the script. The ‘my_iterator’ object is initialized with the ‘count()’ function, with a ‘start’ value of 0 and a ‘step’ value of 1. Next, the ‘sum_result’ variable is initialized by the first value of the iterable object. The starting value is initialized to the variable i and the starting number is stored as the character in the variable, numbers that will be used to combine other numbers in each iteration. The values of the sequential numbers will be added in each iteration when the ‘next()’ method is called. When the value of i becomes greater than n, the script will terminate by displaying the result of the sum.

''' The following script will calculate
the sum of 0 to the number that will be taken as input.
'''
# Import count
from itertools import count

# Take a number input to terminate the infinite while loop
n = int(input("Enter the limit value:")) 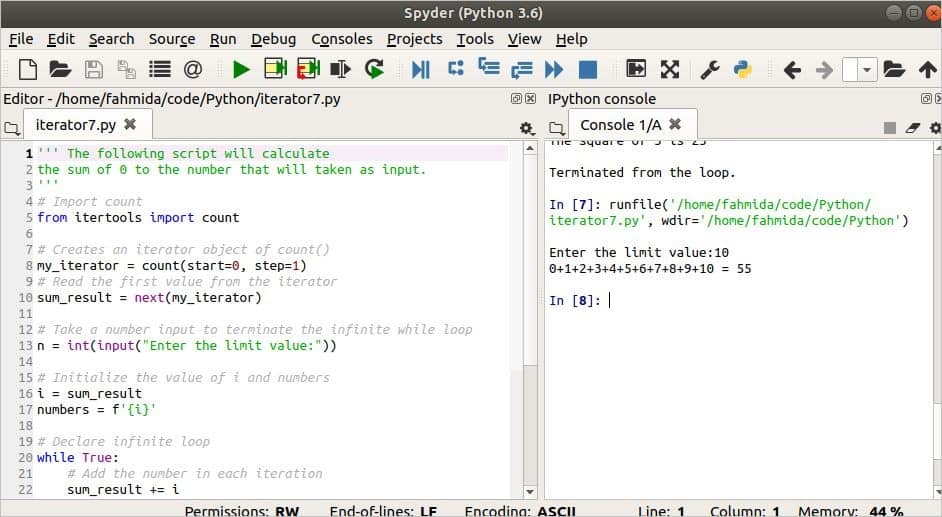 This function contains only one argument, which can be any object. The purpose of this function is to repeat the values of the object after completing the iteration of all values. Here, strings, tuples, lists, etc. can be used as an object. The iterable object returns of this function are used to iterate each value of the object that will be used as an argument by using the ‘next()’ method. The number of times the values of the iterable object will iterate will be based on the number of iterations of the loop. The syntax of this function is given below.

Example 8: Use of cycle() Function of itertools

The ‘random’ and ‘itertools’ modules are imported at the start of the script to generate a random number and to use the ‘cycle()’ function from the  ‘itertools’ module for repeating the data. A list of three random numbers is used as the argument of the ‘cycle()’ function. The iterable object named ‘num_list’ is initialized by the return value of this function. The ‘count’ variable is initialized to 0, and when the value of this variable becomes 6, the ‘while’ loop will terminate. So, the ‘while’ loop will iterate six times, and each value of the list will repeat only one time.

The following output shows that three random numbers, 3, 17, and 185, have been generated as list items. The loop is iterated six times, and these three values are repeated for the next iterations. 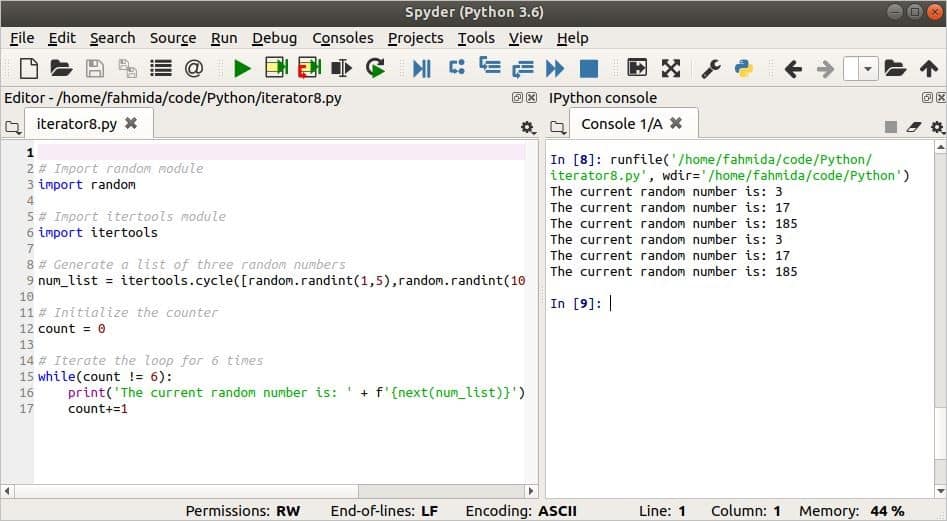 Example 9: Use of repeat() Function of itertools Module

# using repeat() to repeatedly add the string into a list
listData= list(itertools.repeat(string, repeat)) 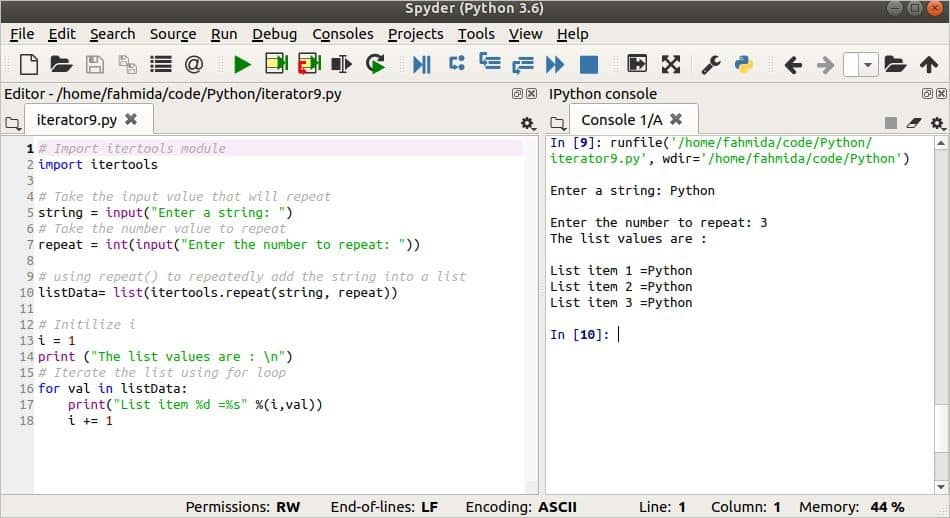 The concept of iterator and the uses of different types of iterators in Python are tried to explain with the very simple examples in this article. Python users can use a built-in iterator or can create their custom iterator based on the requirement. This article will help the python users to know about the methods used in the iterator and how these methods work with any loop to read any iterable object. Some uses of itertools module of python are also explained in this article to know more details of the iterator in python.