Parsing is a process of analysing a series of texts to find out what the program is supposed to do with the given commands. The text is broken into small pieces, known as tokens in order to build the data structure known to the compiler, or the interpreter. The execution results in the intend result at the end. Python is often used as a language to parse command lines with ease. This guide uses this special module shipped with Python, and it’s known as argparse. The special thing of argparse is, it’s quite easy to use, user friendly, available with Python, and helps in creating command lines interfaces with ease.

The following guide demonstrates how to use argparse in Ubuntu, with Python3, and thus make sure both are readily available before proceeding ahead. If Python3 is not available, it can be installed with the following two command lines:

The purpose of this guide is to outline core features of argparse, and how to use some of its options. Argparse requires Python, and a notepad to type its commands. Ubuntu has its own notepad known as “Text editor”, which can be accessed via Ubuntu dash. The commands are executed via terminal.

Displaying the Description at the End (Epilogue)

How to Use Arguments

Positional Argument in A Particular Type

add_argument() not only takes one argument, but also multiple arguments as seen in the following example. If multiple arguments are provided, they have to be formatted as following. The first argument defines the positional argument’s name, second one is its type, meaning the type of the value accepts as the argument for the program, the last one is for the description which only appears when using the help flag.

In the following screenshot, it depicts how program refuses to accept any non-integral value as the positional argument. Only an integer value can be submitted here now. 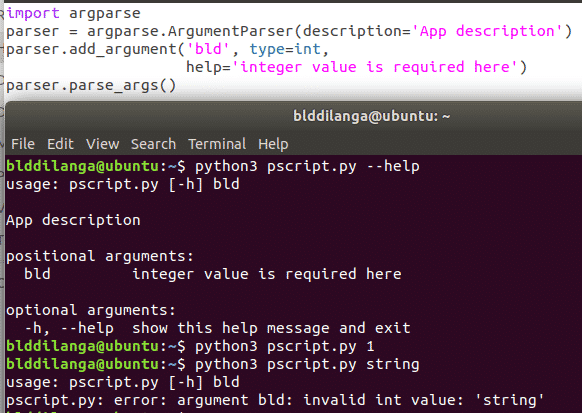 The following command line is same as the above one, except it makes the positional argument optional with nargs parameter; hence the user can omit it when executing the program. However, if the argument was provided, it has to be in the correct data type or else it will not continue parsing as usual. 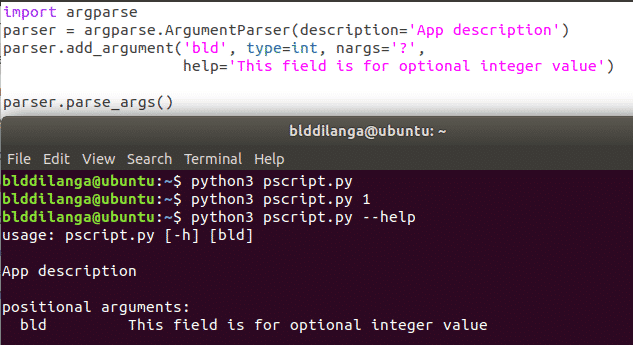 Optional Argument in A Particular Type

The difference between argument, and the positional argument is positional argument doesn’t have to be mentioned, whereas the argument has to be mentioned as a flag along with its value when executing the program. The following command line contains the exact same texts, except the leading double lines (hyphens). They signify the argument is an argument/flag which has to be mentioned along with a value in the given type when executing the program. To make the using of argument compulsory required=True parameter can be used in add_argument() function as one of another arguments. As said above, not complying to the format will throw an error. 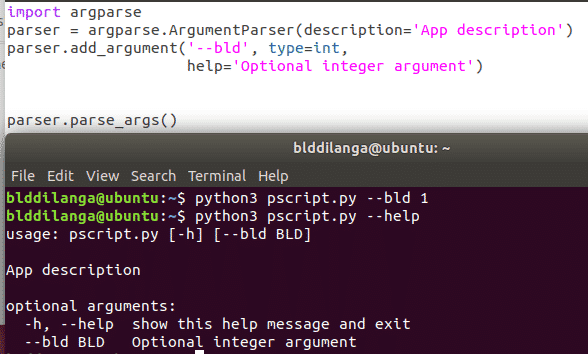 Short arguments act in the same way as its longer counterparts. The only difference is it helps to save the space when using a large amount of command lines or when the developer wants to keep the commands tidy, and organized as much as possible. In the following example it depicts how program responds to the both arguments in the same way. When using the short arguments, make sure to use only a single hyphen as it’s the standard in the industry. 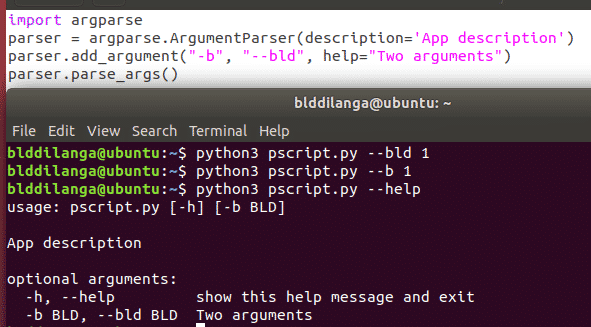 Conditional arguments are very simple to use as arguments in previous examples. The only difference in this segment is to specify the action parameter. It accepts two values, store_true, and store_false. If action parameter is specified as store_true, whenever the flag argument is used in the program, it’s assigned by true Boolean value; hence it can be used as a conditional argument. The applications of conditional arguments are to make a logical flow of the execution based on the user inputs. So, user decides which path they want to take, and how the program flows. The parsed commands are inside of the namespace object, that’s why it returns the namespace() keyword after the program was executed.

Above all examples doesn’t specify the program’s name. Instead it just states the script file’s name along with the list of accepted arguments. The advantage of using the program name is it makes the program more user friendly, and independent from the script’s name. This is quite useful if multiple script files are involved with the execution. So, it won’t confuse the user with ambiguous names.

The following two command lines have to be used to make it happens. In the first line it specifies the program’s name with prog parameter, whereas this particular parameter can be used as a variable in where program name is used, then when the program is being executed, the prog parameter is replaced with the value stated in argumentParser() function along with prog parameter, meaning “Nucuta App” in this example. Furthermore, it’s important to use the command as %(prog)s or else the parsing won’t be successful.

How to Check Conditions and Make the Execution Flow 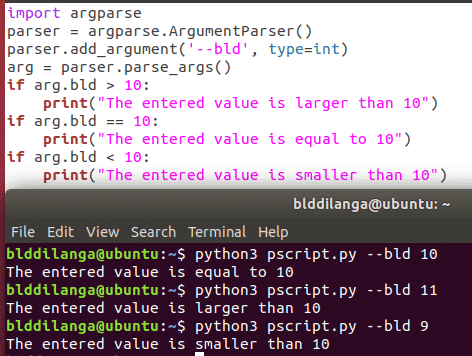 With this guide, you are ready to start parsing all the commands line in python.  Good luck