In this example, we’ll use Python’s “sleep()” function to implement a code. The Python “sleep()” technique is always essential when we wish to suspend the current thread’s operation or for a certain amount of time. Python’s “time” module provides several essential applications to perform time-related operations. The “sleep()” function is among the more well-known ones. Any time a thread is mentioned, the “sleep()” function will halt its operation. The real suspension time can be less than that specified because every captured signal will end the sleep() after its catching function has been executed.

When we pressed the run button, the output showed this statement right away because we didn’t set a timer for it. As a result, it printed immediately, just like other programs do when we print their output.

The second statement is now shown, as seen in the figure. This statement suspends execution for “5” seconds and is displayed after that time because the time parameter for the “sleep()” function was set to “5” seconds.

Example 2: Utilizing the “sleep()” Function in Python to Generate a Gigital Clock.

In this example, we’ll use the “time.sleep()” function to make a digital clock, which we’ll show in the output. First, we import the Python time package as “t” and compute the time inside an endless while loop. In a while loop in Python, a block of code is iterated over while the iteration cycle condition is true. We typically use this loop when we are unclear about how many times to iterate. While a succession of claims is made an undefined number of times while being true. This type of loop starts working when a specific condition is True and doesn’t stop until the condition is False. Then, in the following line, we use the method “localtime()” which converts the number of seconds into local time using the time module “t”. If seconds are not provided or if None, the actual time as returned by time() is used. We added the initialized variable “localtime” with the value “t.localtime()”.

As a result, the current time will now be printed in the output display. But because we set the time to “2” seconds, the program will first wait for 2 seconds before computing and printing the current time again.

Now that “2” seconds have been set inside the “sleep()” method, the output shows a digital clock with the current time and suspends execution for two seconds before printing the next time. The order of time is “hour/minutes/second/AM” so the current time that the digital clock displayed initially is “08:29:43:AM” and the next time it displayed, it did so after two seconds. So, you can see that the seconds have changed the previous one was “43” and the following one was “45” similarly, it continues.

The “time.sleep()” function will be used in this example to demonstrate multithreading. The examples above used single threading, whereas this example used two threads. Let’s begin by importing two libraries. The first is called “threading” and the second is called “time”. Then, we define the function “print k” in the following line. In this example, we first create a function, which is a user define function. Then, on the second sequence, we set the range to “for m in range(3)” and then we use “time.sleep(),” and pass the statement “I love coding” inside the parentheses.

Furthermore, we create the variables “t1” and “t2” and use “threading.thread” to call the respective functions. Then, in the following line, we utilize “t1.start()” and “t2.start()”. To start the thread’s activity, the start() method of the thread must be invoked after the thread object has been created. This invokes the execute() method and starts a new control thread. A thread is considered “active” when something happens in it. 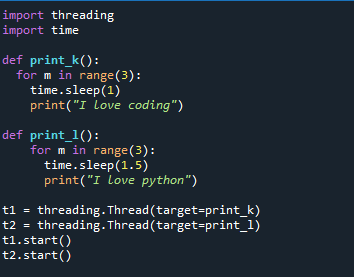 The first time the system reads, it takes more time to read the function and displays the statements sparingly. However, the second time, the same statement is written twice since the data is saved in the system’s memory and therefore takes less time to access. You can now see in the output that both statements were printed three times because we set ranges three times.

In this article, we covered both single-threaded and multi-threaded uses of the Python function “time.sleep()”. In the first two cases, we delayed the execution for a predetermined period using the single-threaded “sleep()” function. In the third example, we used two threads to suspend execution for a predetermined period. To choose how frequently we want to publish the function statement, we also define the range of the statements. The purpose of this article is to help you manage tasks utilizing Python thread sleep.