A thread should use the “join()” function if it wants to wait for another method, which requires the second thread to wait until the first one is completed. Using a thread object, we invoke the join method using the thread objects that import the Python thread module for it is necessary in creating threads.

How to Implement Python Thread Join in a Script

In this example, we’ll use Python’s “thread.join() method” to combine two threads. A thread is a unique processing stream. This implies that there will be two simultaneous events in your program. However, the majority of Python implementations just give the impression that several threads are running concurrently. A key benefit of employing threads is that one multithreaded application will operate on a one-processor processor system while automatically utilizing a multiprocessor system without the need for recompilation. Programming with many separate threads helps implement parallel algorithms.

The join() method of the Thread class enables one thread to delay till another thread has finished running. When thread.join() is called, it will ensure that it is stopped even before the program executes the next instruction: if it is a Thread instance whose thread is presently running.

Let’s begin to implement the script in the “spyder” tool by implementing the code. A great tool for compiling Python code is Spyder. Spyder has dynamic program execution, which gives you new troubleshooting skills. It can also be used to create analyses using information and to accomplish data management objectives. To start the code, the first line imports the “threading” module. A method with the identifier “func1” is created in the next line. Simple user-defined methods are techniques you can use to organize your script within the body of a program. Here, we design one.

Once defined, a function can be used similarly to how built actions and parsing processes are used. Variables are sent by reference to functions rather than by value. The variables “dividend” and “divisor” were supplied as parameters to “func1” in the parenthesis. The statement was then printed using the “print()” function on the next line. The print() function shows the message on the screen or another common output device. The object will be transformed into a string before being shown on the monitor and the phrase can be a string or perhaps another item. The “let starts” statement is passed to the “print()” function, and an “If” condition is applied to determine whether the dividend divided by the divisor is equivalent to “zero,” in which case print “true,” or whether print “false.” The word “end” is then passed when we invoke the “print()” method once more. Then, in the following line, we use “threading.thread” to create two threads. Inside its parenthesis, we run the function while also passing the values of dividend and divisor, which are “15” and “3,” as its parameters.

A similar procedure is then repeated in the next line, this time executing the function with a thread and handing it the values “21” and “2” for the dividend and divisor as arguments. The first thread is kept in the variable “thread 1,” while the second thread is kept in the initialized variable “thread 2”. The next line uses the “start()” method and “thread 1” to begin the thread’s execution. The operating system will launch the process in a new thread as soon as it can after the “start()” method returns instantly. Then, “join()” and “thread 1” are called. In the same way, we repeat the process by calling the “start()” and “join()” functions using “thread 2.” 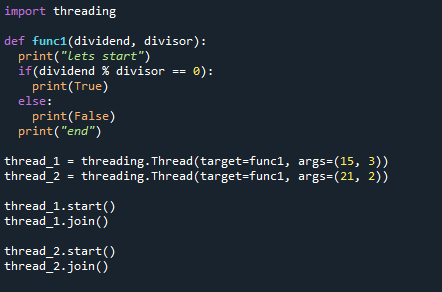 The “join()” technique is used by a thread to wait for another thread. Consequently, the very first thread has been finished. Let’s start printing first, and after that, “true” appeared because the first thread’s condition had been satisfied. The answer will be 0 if we divide 15 by 3. Thus, it displayed “true” before adding the printed statement “end,” signifying that the first thread has come to an end. The second thread was then seen. The second thread then ended after displaying “false” because the criteria were not met and the answers to the given numbers were not zero.

Here is another threading example where the “threads.join()” function is used as well as the time.sleep() method. The first step involves importing the two Python libraries. Because this code uses the “time.sleep()” method, the first import is for the “thread” module, while the second import is for the “time” module. The Python “time.sleep()” technique is utilized to wait for a program’s execution. The Python “sleep()” method can be used to stop a program’s performance for a specified period, determined in seconds. Understand that the Python “time.sleep()” technique just terminates the current thread, not the entire program.

Then, we create a second function, “func2” and pass two statements to it. The first statement we want to print is “Starting the thread 2,”. In the following line, we set the time intervals in seconds to be “4” by using the “time.sleep()” method. Then, we use the “print()” function to print the statement “Thread 2 is ended.” After constructing the function, we now create two threads and use the thread module to call the function, but before doing so, we display the statement “start” first. The first function, “func1,” is now called using a thread and stored in the newly formed variable “t1,”. After which, “func2” is called using a thread and placed in the variable “t2.” 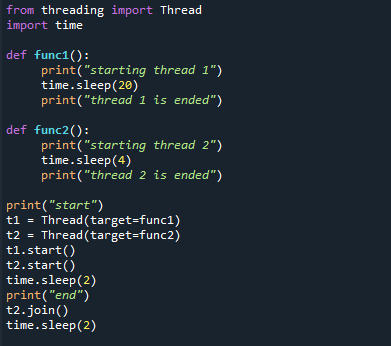 This article used two threads to discuss the Python “thread.join()” technique. In the aforementioned example, we constructed a function, called it using the function with the “thread” module, and used the threads to invoke the “join()” method. This “join()” procedure waits for the first thread to finish before starting the second thread’s execution. In the example above, we also used “time.sleep()” to delay the execution of statements.