Every component in a set would have to be unique and unchangeable and will eliminate redundant entries from sets. Sets are changeable, which indicates we may change the elements of the sets if they’ve been created. The items of the set have no index, meaning we would not explicitly retrieve any component of the set by utilizing the index. Therefore, we could display all elements of the set. Let’s go through the sets in detail.

Creation of a Set

First, we define the elements of the set by using the set() function. This set contains the names of different girls. We have initialized a variable “s” to store the set’s elements. Then, we used the print() method to display the required set.

We will add an extra element in the specified set, so we have applied the add() method. As a function parameter, we will give an additional name that we want to insert in the set. Once again, we employ the print() command to get the set after inserting a new element.

The frozen sets are unchangeable entities with only procedures and expressions that give outputs without modifying the sets’ elements that have been implemented. While components of a set could be adjusted at any moment, components of a frozen set would not change once they’ve been created.

After running the previous code, we get two sets: a normal set and a frozen set.

Inserting Different Elements in the Set

We can insert the new elements in the required set by applying the add() function. This function contains the element as a parameter we want to add to the set.

In this instance, we will see how to insert a new element into the set. The first step is the creation of the set. We have created a set that contains the names of different countries. The print() command will display the countries’ names.

In the next step, we want to add a new name, “Spain”, to the required set of the country. To accomplish this, we call the add() function. We have provided “Spain” as its argument. We have employed the “for” loop to iterate the value up to 6. Within the “for” loop, the loop variable is being initialized. Then, we apply the add() function to the variable.

Union of the Sets

We can take the union of two sets with the help of the union() function and the ‘|’ operator. In the union, the elements of the specified sets are merged.

Here, we will create three different sets. The first set includes the side characters of the movie. The second set contains the names of the movie’s villains, and the thirst set has the name of the movie’s hero. In the next step, we have to take the union of the two sets “side_characters” and “vilan” using the union() method.

After taking the union, the resultant value is stored in the variable “cast”. print() method prints the union of these two sets. Now, we use another method of taking the union. We have utilized the ‘|’ operator. We take the union between the sets of “side_characters” and “hero”. In the end, we again employ a print() statement to show the union value.

The Intersection of the Sets

Common elements of the two sets have been chosen while taking the intersection. They’re identical to iterating through Hash lists and merging identical data from defined values of sets.

We will get the intersection of the two sets in this example. For this, we must define the sets using the set() method. We take two empty sets. To add the values in both sets, “s_1” and “s_2”, we have to utilize the “for” loop. Here, we specify the values of both sets by applying the add() method. 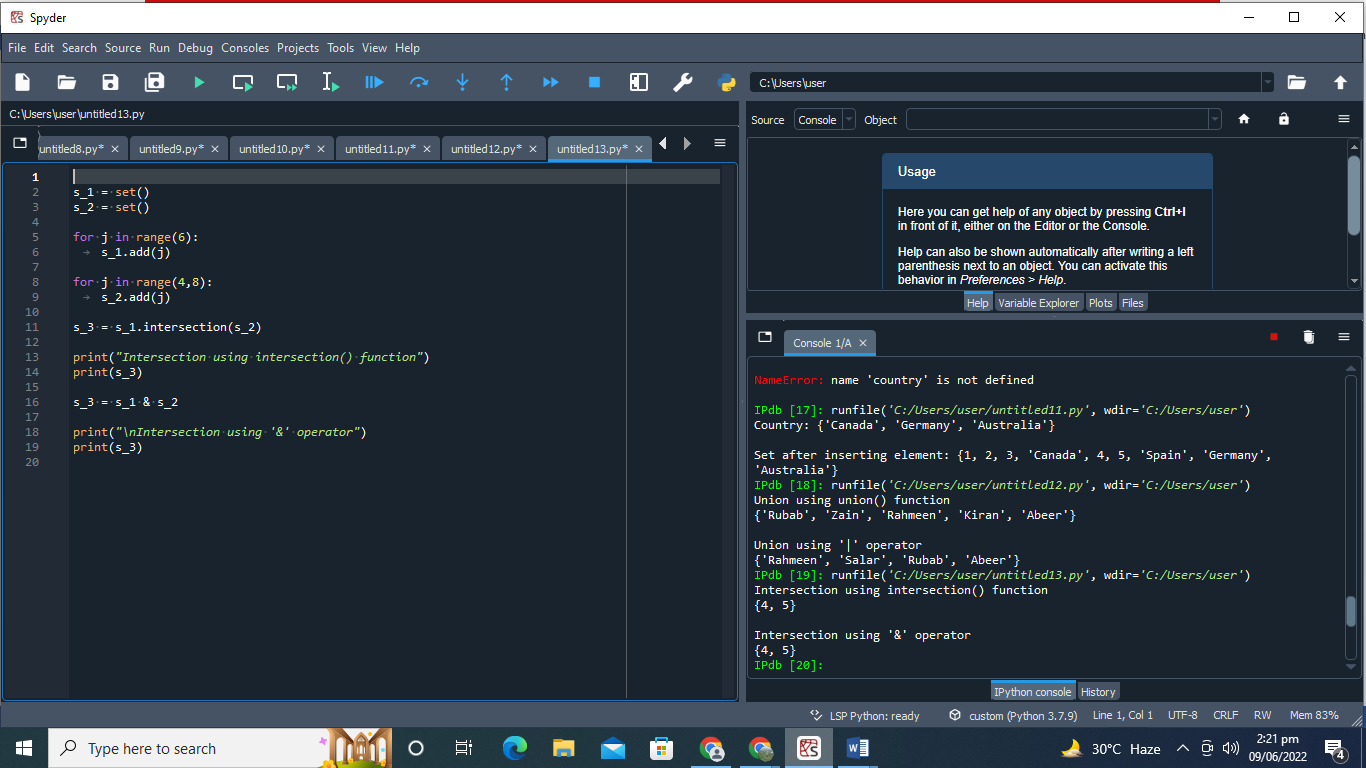 In this article, we discussed sets in Python. A set is an unsorted sequence of data points, and that data type is iterable, changeable, and has no redundant items. The set module in Python illustrates the mathematical concept of a set. We have also seen how to create a different set, add the elements in the sets, the difference between a normal set and a frozen set, and the methods of taking union and intersection of sets. We can take the intersection of the sets by using the intersection() method and the ‘|’ operator. Similarly, we can get the union of the sets by using the union() function and the ‘&’ operator.