Access to the database of Unix usernames and passwords is made possible by the Python pwd package. It works with every version of Unix. However, most contemporary units employ a system of “shadow passwords.” The pwd module of Python will be covered in this lesson. In this section, we’ll discuss the various properties that the Python pwd package is most frequently used with. Unix supports numerous concurrent users and is comparable to DOS and Windows. Each item is reported as a tuple-like object with attributes that are comparable to those of the members of the passwd structure provided in the header file “pwd.h” for the Unix user account and password database.

Additionally, using various examples, we will go over the three key methods found in this module: pwd. getpwuid(), pwd.getpwnam(), and pwd. pwall(). To put it briefly, this tutorial will cover every aspect and technique found in the Python pwd package that you need to know in order to begin functioning on this module.

The password database record for the given user id can be obtained using Python’s pwd.getpwnam() function. The following is the syntax for this approach:

It takes the parameter user_id which is a number that represents the user id to which entering a password into the password database is necessary. This method gives back a tuple-like object of class “pwd.struct passwd” that reflects the supplied user password id’s database entry. Let’s take an example where we have implemented the pwd.getpwuid method. 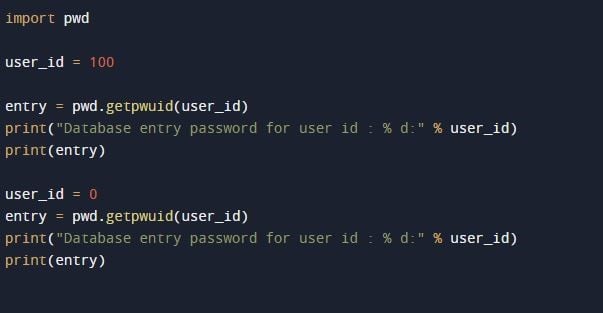 Begin with the implementation of the code. First, we have imported the pwd module provided by Python. Then, we have set the variable which is represented as user_id. The given variable is initialized with the value of the number at the same time. It is the user id set for this script.

You can see the password generated for both the user ids as follows:

The password database record for the supplied user name can be obtained using Python’s pwd.getpwnam() function. The general syntax of this method is as follows:

Let’s take a look at an example of the getpwnam() method to see how it functions now that we’ve already talked about it. Check out the Python program below:

The following entry password is generated for both the user name by using the pwd.getpwnam method. The console screen snapshot shows this:

The list of all items saved in the password database can be obtained using the Python pwd.getpwall() method. It has the following syntax, which we utilize in the python script.

Basically, this method doesn’t take any parameter value. This method provides a list of objects of the tuple-like pwd.struct passwd class whose elements are all of the entries that can be found in the password database. The getwall() method’s operation will now be demonstrated using an example. Check out the Python application below.

After that, we printed the retrieved password. For this, we have a for loop which cycled over each database entry’s password and was assigned to the variable wall. The variable wall here represents the rows. The print method takes this wall variable and prints the password list. 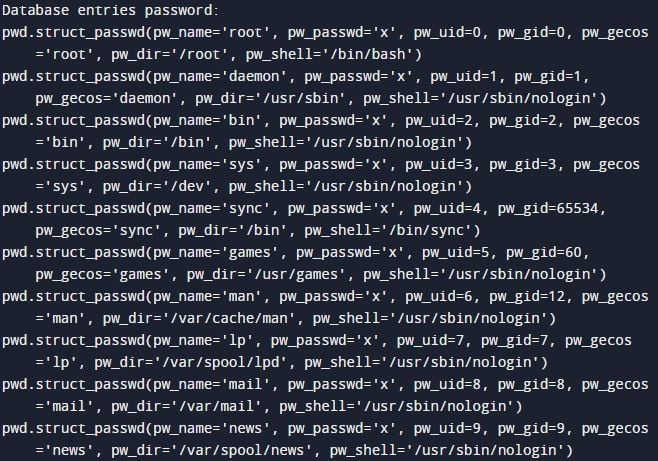 The password database can be accessed using the Python pwd package. This module gives us access to the database of user accounts and passwords. The entries in the database for passwords resemble type objects. The Python pwd module was covered in this tutorial. We gained knowledge of the various attributes that are offered in this module. In addition, we covered all three of the accessible methods in this module by using various examples. To sum up, the information in this article includes everything you need to know to begin utilizing the Python pwd module.