While contrasting variables, it’s important to examine both the contents and respective datatypes. Whenever the values of the two inputs differ, the statement is satisfied. Throughout Python, we may use “!=” or “is not” to do not equal operations. Whenever the values of any two Python variables or operands supplied on either side of the not equal operator are not equal, it must return true, else false. Many structured query languages might grumble about matching various types since Python is flexibly yet tightly typed. The not equal operator must return “True” whenever the values provided in two variables are the same; however, they are of various types. Let’s have some examples to see the working of python Not equal operator. First of all, you must ensure that your system has a python tool installed and configured. Launch your installed python tool to start working. At the time of implementing this article, we have been working on the Spyder Python tool.

Our first example will be containing different ways to compare two or more variable type values using the NOT EQUAL operator. Now the tool has been opened, don’t forget to add python support to it. We have initialized two integer-type variables, “x” and “y” in the script. After that, we have used the != sign to compare both the values of variables, and the Boolean result will be saved into a new variable, “c”. At the end of the code, that Boolean value that has been stored in the variable “c” will be printed out.

Let’s save our code as test.py and execute it by pressing the green execution button of the Spyder tool. We got the result as “False” because both the values were equal and the same in the data type.

We have updated the code as below. We declared three different variables, with 2 of them have the same value, and the last one has a different value. We have used the NOT Equal operator in the first statement directly to print the result of comparison between variables a and b. Then we have compared variables “a” and “c” outside of the print statement and printed the result. Then we have declared a string type variable “q” and compared it with the integer variable “a” in the print statement. Save the script and execute it. 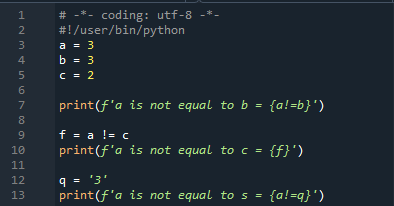 Let’s have a look at the Not Equal operator used in the “if” statement while using python. We have used two variables in the code. Variable “x” is an integer type, and “y” is a string type. Then we have initialized the “if” statement and used the NOT EQUAL operator in it within both operands to check whether they are equal or not. In the end, printed out some statement.

Upon executing a test.py script file, we got the string as output value as presented in the image below.

Let’s have a look at another instance. This time we have used both string type variables and compared them within the “if” statement. At last, we have used the print statement to print out both variables with some string values in them. The output must be error-free.

While executing this file, we have got no errors and got the working output as below.

Let’s have a few complicated examples from now on. In this instance, we have been using an integer variable “z” having the value “21”. We have first calculated the modulus of a variable “z” with integer 2. After that, we have used the “if” statement to utilize the NOT EQUAL operator in it to compare the calculated value with 0. While the calculated modulus is not equal to 0, it must print the value of variable “z” and the string saying “is not even” used in the print statement.

After saving and executing the file, we have got no errors, and the variable z has been printed out along with a string “is not even”.

In the above example, we have just used the “if” statement. This time we will use the “if-else” statement in our example. We have updated the code as below. First of all, initialize an integer type variable “a” with value of 10. After that, we have used the if-else statement in our code. The “if” part of the statement is using the “is not” operator to compare the variable “a” with a value of 20. If the condition satisfies, it will print our “Values are not Equal”; otherwise, the control will be given to the “else” statement to print that the “Values are Equal”.

Save your code and run it. You can see the condition in the “if” statement got satisfied, and it prints that the “Values are not Equal”.

Let’s take a look at another instance for a time. We have declared a string “str” having the value “Aqsa” if the statement is utilizing this string to compare it with some value and print the message. When the condition of the “if” statement fails, control will be transferred to the “elif” statement to see whether the variable “str” is not equal to a value given. After that, it will print out a message.

As the condition in the “if” statement is satisfied so that it will print out the first print statement, and control will never be given to the “elif” statement.

Now when we execute the code once again, it will display the result of the print statement mentioned within the “elif” part of the nested “if-else” statement. 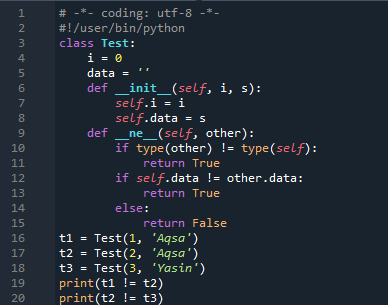 The output shows False as a return to the first print statement because the values parsed to both objects were the same. On the contrary, the second print statement returns True because t2 and t3 both have different values and are not equal.

With the aid of well-explained illustrations scripts, we learned what the Python Not Equal Comparison Function is and how it is used to determine whether two variables aren’t identical.