Asynchronous input/output or asyncio is a programming methodology that uses an event loop or a single thread to accomplish high concurrency. Python is not the only language or framework that uses the approach; JavaScript’s NodeJS is maybe the most well-known. We use asyncio in Python rather than multithreading because writing a thread-safe programming is quite challenging. It is significantly more difficult to encounter race problems when using asynchronous programming since you can pinpoint specifically where the code will change from one task to the next.

Due to the requirement that each thread has its stack, threads use a large quantity of data. Async programming keeps the stack small by unwinding it continuously in between operations, allowing all programs to share the same stack. The platform needs more memory to support the threads because they are OS constructs. Asynchronous tasks do not have this issue.

Here, we will discuss the asyncio function – gather. Two crucial functions should be understood when learning the Python asyncio module. The first option is run, which is a straightforward method of running a coroutine, and the second option is gather. The current context restarts once all of the coroutines are completed, allowing you to launch a number of them simultaneously using gather.

Each coroutine’s responses are listed in the return value. As its name implies, asyncio.gather() mostly concentrates on gathering the outcomes. It waits on numerous futures and then returns the outcomes in a specific sequence. The asyncio.gather() cancels all incomplete jobs it gathers if it is cancelled by itself.

Syntax of asyncio.gather in Python

Asyncio.gather() accepts a single or multiple awaitables as *args, encapsulates them in tasks if appropriate, then waits for each of them to complete. The results of each awaitable are then returned in the order that you passed them:

You can also provide the return exceptions=True, in which the case exceptions are delivered along with the regular results, and you must determine for yourself whether they were successful.

Example 1:
The asyncio.gather() function can be used to run numerous coroutines simultaneously. Coroutines are run concurrently by this function as parameters. 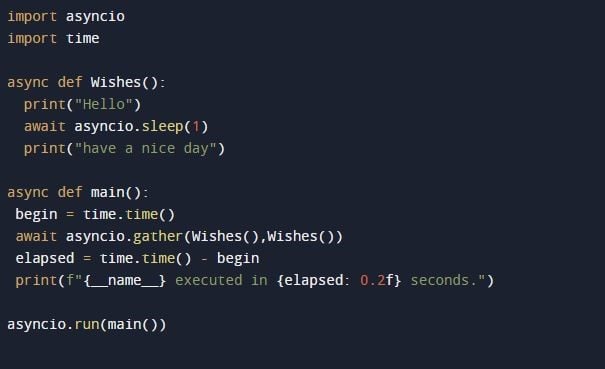 Here, we imported two modules: asyncio and the time of Python. Then, we defined a function with the name “wishes”. We established the async function definition. Async definition only contains asynchronous code; all other code is synchronous. Inside the async def wishes function, we printed the string values. The asyncio.sleep function was called and the value for the suspension of the selected thread was set using the await keyword. Await returns the control to the event loop during a function call.

After that, we constructed another async def function as main(). Inside that function, we set the variable where the time function from the Python time module is called. With the await keyword, we defined the asyncio.gather function to gather a result of the function wishes. We also recorded the time elapse for the execution of the main code.

In the output, we have the coroutines generated two times concurrently from the wishes() function. The output of the code previously mentioned is successfully displayed in the following image:

Example 2:
The execution of several co-routines can be dynamically scheduled using the asyncio gather method as demonstrated in this example. Following the successful collection of all co-routine results, the await call provides the values as outcomes and prints them. 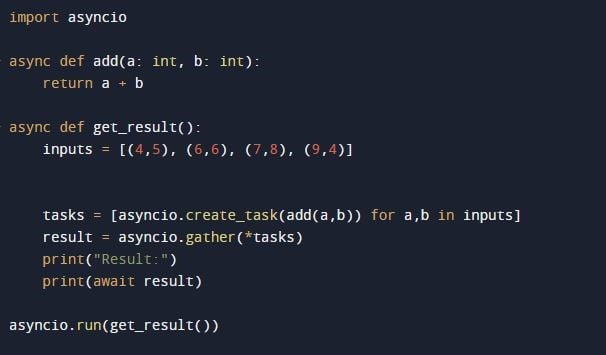 In this particular example, we included the asyncio module for utilizing the asyncio.gather function. Then, we defined an async function for addition. We generated the add async function and set the two variables a and b with the int data type to the add function. With the return command, we added these variables with the plus operator.

After setting the coroutine, we created another function to schedule the event loop in the coroutine. The function is named “get_result” where we initialized the list with the variable inputs. After that, we created the task list in the task variable. With the asyncio.gather function, we have gathered the result of the task list by passing the pointer task to that function. We finally printed the outcome. The following task list is obtained from the previous program:

Example 3:
We gathered the result of the future task by passing the future task in the asyncio.gather function. Future designates a calculation that is currently running or that will be planned in the future. An eventual outcome of an asynchronous procedure is represented by a unique low-level awaitable object. 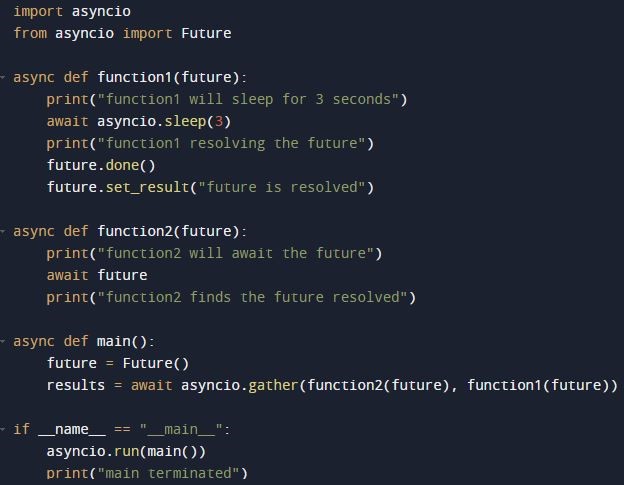 After that, we have the async main definition which we called the future function, and get the result from the future by the asyncio.gather method. In the end, we printed the statement when the main function was terminated. The output of the code previously mentioned is successfully displayed in the following image:

Gather is strong, as you can see. We can succinctly request several resources at once, which is a typical occurrence in the web programs. With the help of the Python asyncio.gather built-in module, asynchronous programming was presented in this tutorial. We gathered the results of coroutines, tasks, and futures. A concurrent code may be your best choice when you need to optimize the performance for particular activities, as we previously discussed how to execute the numerous coroutines concurrently using the asyncio.gather methods.