With such a rapid increase in the evolution of technology, this has led to the appearance of so many different tools and frameworks that have made development so much easier. However, every software project has demands that differ from each other and hence it is necessary to choose such a tool that meets the needs and requirements of the project and allows the team to develop and manage the project in an efficient manner. This is where Integrated Development Environment (IDE) software and Text Editors come into the picture.

An IDE is a programming tool that specializes in certain languages and provides several utilities to work with. It is the complete package where you can not only write the program but also compile it and debug it. Text Editors, on the other hand, adapt a broader approach as in, there usually isn’t any restriction in the programming language and let you create and modify the contents of all types of files. With a plethora of options out there, comparisons between these two become inevitable as one needs to be aware of which one might bring the best out of you.

When it comes to selecting IDEs or text editors from such a huge variety of options, PyCharm and Sublime Text are some of the most popular alternatives. Today we’ll be looking at their strengths and weaknesses and what really sets them apart from one another.

What is PyCharm and Sublime?

Before moving onto the specifics, let us first give an overview over what it is that we’re comparing.

PyCharm, developed by JetBrains, is a fully featured IDE designed for the Python language. With features like code navigation, automatic refactoring and a customizable user interface, along with the ability to work with Databases and support Jupyter Notebooks, PyCharm is a fascinating, fully-equipped IDE that tries to bring all the Python development tools together in one place.

On the other hand, Sublime Text is a powerful, sophisticated Text Editor which, due to its simple and elegant interface, is widely used among developers. Its major selling points include its speed and its powerful features hidden behind its minimalist appearance. With features like multiple cursors, clever auto-completion, and an ecosystem loaded with customizations and plugins, Sublime is a beautiful editor with rich functionality that people have come to love to use.

Let us now finally look at some of their key differences in detail.

As discussed before, PyCharm offers a fully integrated environment for Python development. Meaning you can write, edit, run and even debug the Python Code. Beside this, due to it sharing features with other IDEs, it also has the support for HTML, CSS, and JavaScript.

Sublime Text, on the other hand, supports a large number of languages which clearly shows its powerful nature. It, however, is mostly used for writing and editing code and although it does have a built-in Build System (Ctrl + B) to run programs, it is very limited and supports only a small number of languages. The image below shows the broader approach that Sublime offers: 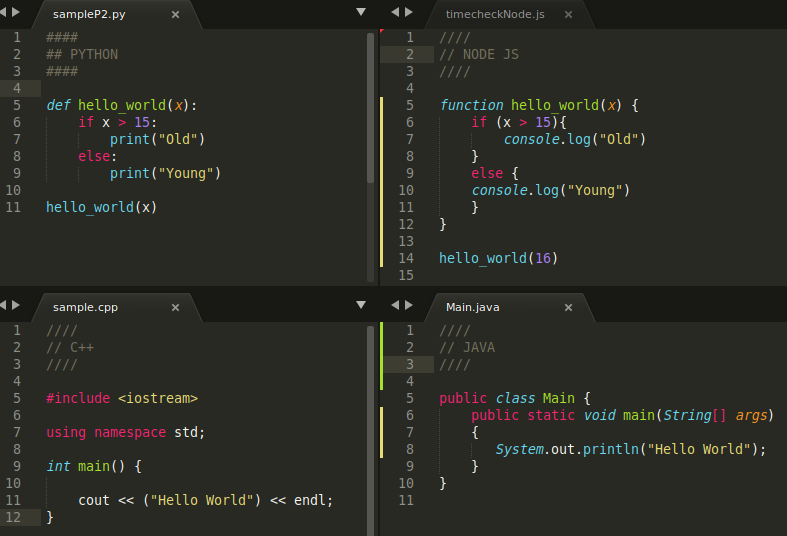 It has become immensely important now to have a software that responds and runs immediately without having any decline in its performance. Sublime has the upper hand in this case as it being a simple, lightweight text editor runs quite smoothly.

PyCharm is indeed slower than Sublime and this difference becomes clearly visible when the matter of handling large files arises. Although the difference between the two can be overcome by getting a better system, this stability of Sublime has made it popular among the community.

One of the best features that PyCharm has to offer is its integrated debugger. It allows users to easily set up breakpoints by double clicking on your editor and also displays all the values of variables on execution. It also allows one to step into the code using graphical buttons and keyboard shortcuts. Let us look at an example:

We run the following code in PyCharm:

We place a breakpoint at hello_world(x) and run the debugger by clicking on the following: 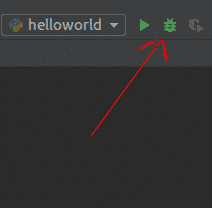 After running the debugger, we get something like this:

Now using the buttons on the left, we can use the debugger.

Another great feature that PyCharm offers is having an integrated terminal inside of it. Having an embedded terminal is such a useful feature as one can run Git commands, use tools like Far Manager and even run commands related to Python or JavaScript. See the image below:

Along with this, PyCharm also has a built-in run tool that runs your program and displays the result generated by your application. It also allows users to rerun, stop, pause or terminate any application. Following is the output that we get from using the run tool: 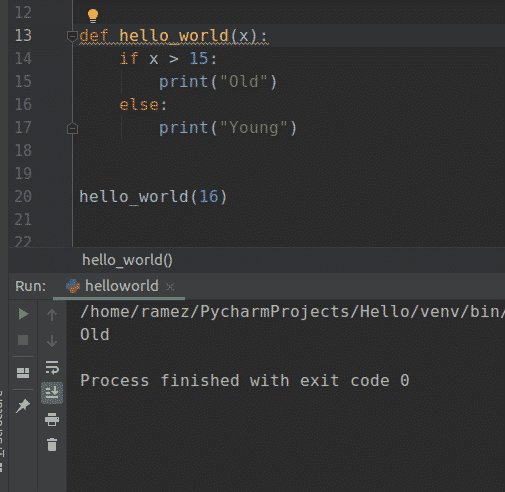 As mentioned before, dublime also does have a Build System which allows it to run programs, albeit being very limited. It, however, supports only a few of the languages like Python, C and C plus plus.

Another great feature of Sublime is its powerful search function. It allows one to easily search and replace text, numbers, regular expressions, and even case sensitive words. In addition to this, it has the powerful GoTo Anywhere Function. Pressing Ctrl + P opens the GoTo Anywhere function, from which one can easily open files and jump to words, lines or symbols instantly. In the image below, the GoTo Anywhere made me jump to line 10:

PyCharm doesn’t has an in-depth search system like Sublime however, its navigation bar, which allows one to easily navigate around modules, is also a great alternative.

One of the best features that come with PyCharm is its compatibility with a number of version control systems such as Git. Version control systems are tools that allow one to record the changes being done to the file. If one wants to return an older modification, then the user can simply select that version of the project. Using these systems is fairly easy in PyCharm as there is a separate option for VCS in the menu. Following shows how Git appears once a repository has been made and one can easily update it:

For version control system access in Sublime, users need to install the Git plugin however, even that has very limited interaction.

PyCharm or Sublime – Which to Choose?

It’s hard to say which of the two is better as both PyCharm and Sublime have their own specialties. It all depends on what the user wants to do. If the user is interested in having a single program which he or she wants to use for all his different programming related work (PHP, HTML, Python, etc.), then Sublime would be perfect. If the user is interested in having a fully integrated software with multiple features, then PyCharm would do the trick. Both sets of tools are immensely popular among the community and would be great choices to choose from for development.